Italians Do It Better: Optronica Festival 2007 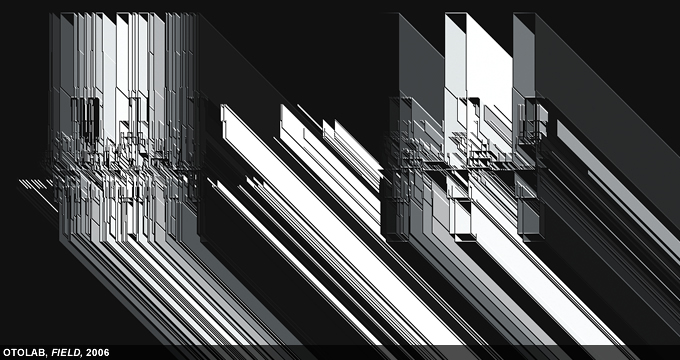 The DVD produced for Optronica festival 2006, is made of 6 different videoclips, created by 6 different Italian audiovisual artists. Each videoclip will be focused on the whole and radical link between audio and video, with an approach both minimal/graphic and narrative.

Digicult and VJcentral.it have collaborated as guest curator for Optronica Festival (London) to collect the videoscreening and installation Italians Do It Better, an overwiew of some of the most innovative Italian audiovisual artists working on the concept of AV experimental electronic synesthesia and the eclectic use of codes and softwares.

Optronica is the London based visual music festival organised in collaboration with the British Film Institute, by Addictive TV and new-media curators Cinefeel. The festival features live audiovisual performances, screenings and related special presentations from a whole host of audiovisual artists, film-makers and music acts, all exploring different aspects of audio/visual fusion and showing how today the long tradition of visual-music has expanded to include the wide range of styles and practices we now see.

In the last years, the Italian situation of audiovisual and multimedia live performances is radically changed. From the first pioneers to a wider range of electronic musicians, visual artists, graphic designers, digital animators, djs and vjs, the state of the art is at the moment very interesting and internationally renowed.

Many new events, festivals and club nights is emerging all over the country, following the new trend around new media and digital art and communication forms. At the same time, many of these artists, for many inside reasons, have not many chances to show their projects and works outside of Italy, in the main international festivals and contests. We are not speaking about some few and spot chances of course, but of a whole and radical movement that in the last years grown up, had its experiences, shared its contents and that is now ready to show itself internationally.

The DVD produced for Optronica festival 2006, is made of 6 different videoclips, created by 6 different Italian audiovisual artists Each videoclip will be focused on the whole and radical link between audio and video, with an approach both minimal/graphic and narrative.

In IDNLNY by Elec, visual objects are programmed in actionscript while the audio signal is converted into numerical values that function as oscillators. In Kinotek‘s Linfa, the artist developed his own software for real-time video processing and sound analysis and in Portobeseno, artists Mylicon/En play with all manner of video stills, photographs and Super8 movies.

CF#1_1 by Tez calls his work a “procedural video composition” in which custom software generates an ever-changing videopainting that reacts in real time to a multi-channel sound composition. 151.05 by Quayola is a video in which each layer of the 126bmp audio track has it’s own specific animation. Finally, Otolab‘s Field is a generative video in which the 3D space is formed from short-wave signals and interferences.