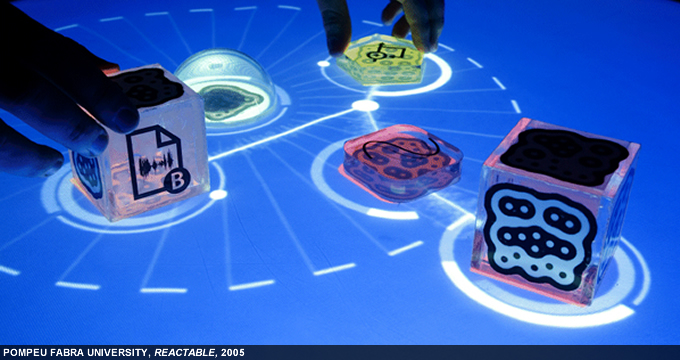 Launched at Vision’R in Paris in Spring 2009, LaptopsRus with its invited and open call VJs / Live performers has played each season based on the 4 classic elements. In summing up the one year touring, LaptopsRus presents an all out 4 season live performance at Matadero Madrid, accompanied by an AVlab workshop at Medialab PRADO Madrid and a conference at Reina Sofía.

Marco Mancuso and Claudia D’Alonzo were invited by LaptopsRus festival, in association with Museo Nacional Centro de Arte Reina Sofía, at the “Generation Laptop Real Time” mini-conference. LaptopsRus is a network initiative which holds public MEETING | REUNIÓN with woman live performers in a tournament setting for its 2009-2010 touring season.

While digital art in installation/DVD Format has claimed exhibition space in the museums, the dynamic real time visual/audio processing works, , mostly presented at clubs and AV festivals, are yet to be explored and exhibited at the museum quarters. The conference, bringing together artists, curators, theorists, critics, practitioners, scholars, organizers and interventonists, provides a platform for critical review of contemporary AV live performance and further networks today’s laptop generation.

The purpose of this presentation is to show a broad, though not exhaustive, view of the cross-disciplinary contemporary Audiovisual Art international panorama. Based on Digicult’s experience as a critic and curator, the project wanted to identify a critical path highlighting those that are some of the paradigmatic artistic experiences in the contemporary audiovisual production.

The attempt was to not limit the discourse within a specific discipline, but rather to wander through some of the most interesting and common areas of research and experimentation.

Because, with the development of digital tools, the divisions between traditional disciplines belonging to the fields of art, film, design, performance, science and network are gradually disappearing, while common languages and aesthetics, similar references to the avantguarde tradition, as well as similar perimentations on the technologies are structuring.

In a potentially broad and undefined context, the key that Digicult adopted was that suggested by the main item of this panel: the networking. In other words, Digicult have included some artists, designers, scientists, performers, hackers taking into account their significance also in terms of networking.

Where the network is not only a networking or database connection, but can more broadly be interpreted as a structure of human relations, as sharing of knowledge and understanding, as a union of different professionals, as belonging to specific communities of reference.