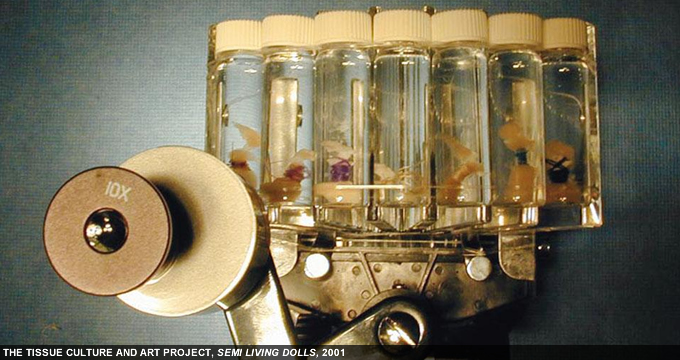 Città della Scienza S.p.a (public limited company) is Campania Region’s instrumental agency that supports innovation and the internationalisation of the regional system. As representative of the region, it organizes all the region’s programmes and strategic activities. Fondazione IDIS-Città della Scienza is a young community that lives and works in an old chemical factory, recovered with an elegant operation of industrial archaeology and that overlooks the wonderful Bay of Naples, under the Posillipo hill, between Nisida and Bagnoli.

Digicult was invited at the workshop “Art and Science” held at Città della Scienza, promoted by Fondazione IDIS-Città della Scienza and Le Nuvole-Teatro Stabile di Innovazione, obtained great success and a great audience. Marco Mancuso were invited to speak about the possibile connection between art and sciences on the border of contemporart technological art and design.

A two days of study a meeting / comparison on the convergence between the languages of art and science in the areas of scientific communication. The very dense and varied program, which has been enlivened by the weight and prestige of the speakers, focused on the relationship between aesthetics and contemporary art museum of the last generation, the theatre inside the museum and experiments as the interface between art and science.

The relationship between art and science has always been very close and is not a discovery of those days. This relationship has changed, however, because part of what is commonly called science is technological applications: “homo faber”, usually involved in art, is involved also in implementing the same technology, employing his intelligence and his imagination. An integrated technology project, on the other hand, can bind scientists and artists.

The study of materials is done by scientists, the property of aesthetic shapes is made by artists (design and architecture are arts). From this point of view, the new generations who already live in a climate of Technoculture, do not pose the question of a more conventional separation between science and art. The contemporary culture is not a culture of “ars” and “scientia” (as worlds apart), but a Technoculture, a hybrid in which the otherness takes precedence over identity.

And we can not call it a “Western culture” anymore because today, both art and science, are universal values, recognized everywhere in the world. Objectives pursued by artists and scientists of all nations. Characteristics of the global knowledge of the twenty-first century, what is already conveyed via telecommunications networks.

The similarities between artists and scientists do not sell out in collaborations. When artists turn out to be excellent mediators of scientific culture, the inquiry must go further in the direction of the common elements that artistic and scientific researches have in common. While the ultimate goal is the pursuit of innovation and the general investigation of the world from theoretical models.