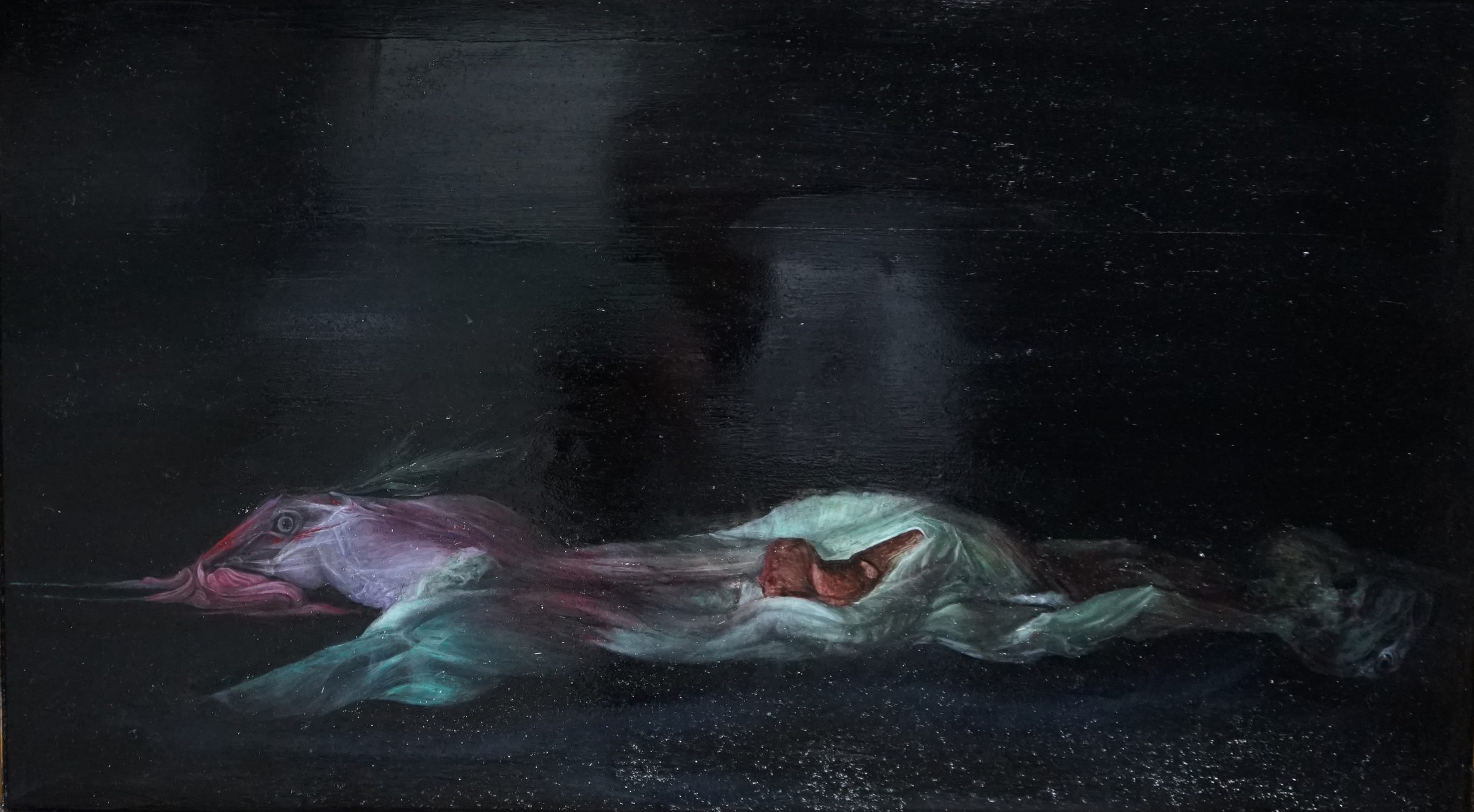 Yiannis Melanitis (Athens, 1967) is an artist and assistant professor at the Sculpture Department of the Athens School of Fine Arts. In his research he combines painting, sculpture and projects between science and digital. In Italy, especially thanks to the articles by Mario Savini, there has recently been talk of the portraits that Melanitis created with the help of AI CIRCE, a philosophical assistant equipped with artificial intelligence, or of Leda Melanitis, a butterfly in which a gene of the artist has been inserted, as a form of information exchange between organisms. Through his painting and the meanings he attributes to his own doing we can understand better and more of the research of this artist who goes beyond the boundaries of the contemporary by creating bridges that from the Hellenistic Age reach the visions of a very near future.

Silvia Scaravaggi: You are already known to Italian audiences, and Mario Savini, among others, dedicated your research more than an article on Nòva from IlSole24 Ore (eg. https://mariosavini.com/2021/07/19/il-sole-24-ore-lartista-melanitis-allopera-con-lassistente-filosofica-circa) and in his book Arte transgenica: la vita è il medium (2018 Pisa University Press, see here Federica Fontana’s interview Federica Fontana https://digicult.it/it/books/mario-savini-arte-transgenica-la-vita-e-il-medium). In your artworks, you reach the frontier of AI, bioart and, at the same time, the more traditional path of painting and drawings. Would you like to tell me more about your eclectic way of creating?

Yiannis Melanitis: Art is entailing its contrapposti acts to be on the tip of a needle, a series of risks necessitated by nullity. Art, like life, is in a sense unnecessary, but it unexpectedly happens. In an asymmetrical world, anything, even infinitesimal, may be critical; the concept of information stands on this unattainable summit. Initiated by information, we may construct a theory of the arts and criticism under the light of our times. All my artworks emerge from this procedure. We may schematize a diagram with nature depicted on one side while the artist is mirrored on the other (or in it?). Art springs out by the extension of such a schema in nature or the imitation of it; this has consistently been the dualistic Aristotelian theorem on the arts. As the philosopher defined it, under contemporary terms we may argue that the transformation of specialized knowledge of the mechanisms of nature as Bioart, synthetic DNA and AI practices, lies in extending nature’s ontological status, while painting initially performs an intervention through a mimicry. Mimicry, even in biology is a complex procedure, not to be reasoned as a mere repetition of forms; it encloses the artist in a stage, as a thief of ideas in a theatre, a setting where every animal circulates information inspired by others. Instating the concept of information as a philosophical basis of art, we may define the act of imitation through the distribution of information in nature: imitation practices, as painting does, copy messages or signals that are already used as part of a fixed communication system but also provide misleading information to the receivers.

Ιn Leda Transgenic (2016) IMMAGINE 2 bioart project, the idea was to hide my name inside the butterfly, in nature itself, a gene. Hiding human code inside an insect, much like Bach makes within the structure of the fugue, mainly in his latest work, Die Kunst Der Fuge. On the unfinished score of ‘Art of Fugue’, the son of the composer noted that at this point Johannes Sebastian was dying, hiding in his musical notation his name by corresponding B to Si recession, A to La, C to Do and H to Si (B♭–A–C–B♮). Even more, an artist totally disappears – remember what Károly Kerényi aptly refers to concerning the god Hermes: «In reality, he [the traveller] makes himself vanish (“volatizes” himself) to everyone, also to himself»1.
In philosophical practise, Socratic irony is also partly designed as a technique of ridiculing and disappearing of the “self”. The artists’ name is a camouflage tool against death. So you may see why the paintings depict tricksters, cheaters and de-moralised political figures, composite portraits of political iconography. Information patterns are an element of survival through the artistic management of simulations. They are a kind of hacking, practised by the prey in the implementation of the nature-predator interface. Biology and information theory constitute, in aggregation, a tool of artistic practice from which concepts that lead to works of art derive, not in reverse. Between mimicking and completing what nature cannot bring to a finish2, science’s importance is critical and, in my view, information is the sole philosophical basis of the arts.

Silvia Scaravaggi: How much are you linked to the past of art, which are your reference points, your favourite Old Masters? When we talked, you mentioned Piero di Cosimo, Caravaggio, Arcimboldo and Leonardo. I am interested in the relationship between you and them.

Yiannis Melanitis: Piero di Cosimo is captivated by nature’s exceptional, permutational or idiosyncratic points of information. Two very important modes are used in his method: first is “fantasia”, meaning the assembling of information assets into a compact whole, a metathesis of an ideal image on a painting, and secondly, “randomness”. The methodology of “fantasia” presupposes the insight of a logical background which Piero di Cosimo uses in an intricate weave of the mythical past. It takes a unique moment in the artist’s life to place this particular butterfly on Aphrodite’s knee as in the tavola of Venere, Marte e Amore. This is an unrepeated act of hypersensitiveness, an informational procedure refined in a series of sieves of the specific painter. The artist is entangled on the platonic idea that may be summarized in a statement: «what is perceived as physical in the interface “ideal to real” is not the absolute form of the object or concept, but information data which as a whole constitute its ideal form». So an uncommon plant or animal found by di Cosimo brings a net of data that may be used accordingly in several parts of a painting. Similarly to Arcimboldo’s works, Artificial Intelligence works in the interweaving of images and forms- collecting, sorting and selecting the ideal ones by means of a mechanism. In AI CIRCE project (IMMAGINE 3), a machine opens dialectics with humans on defining the artwork. Techniques and strategies are controlled from an AI software to synthesise qualitative concepts of oil painting, on portraits of political figures under camouflage, reconceptualising the artistic process. The machine synthesizes new forms through dialectics, discussing with the artist. The interpretation of this dialogue leads to a final stage of the work. The artist selects a proposed number of selected elements that will be used to create an integrated image. The components are placed in situ, based on the original images substituting and are draggable by the artist to any alternative positions. The selected images are then displayed and fused as an integral image.
The engagement with information unveiled by light requires certain operations in the artistic lab; the endeavour could not but include exploring the use of lenses, mirrors and reflectors, a practice that has been an obsession for many painters, especially Vermeer and Van Eyck. In the case of Caravaggio, the representation of reality through a lens is revealed even distorted by the slight deviation caused by the mirror, visible on the face of the Villa Borghese Bacchus, where the relative flatness of the head indicates an oblique geometric projection. According to Giovanni Baglione3, an inventory of Caravaggio’s objects was made in 1605 which revealed that he had two mirrors, one of which was convex. Also states that «Caravaggio’s first works were performed through a mirror»4. Deformations are found in both paintings of Bacchus, due to the use of lenses (for the distortion of space, see the face of Bacchus Borghese, and the glass wine cellar of Bacchus Ufizzi where the artist’s face can be seen in reflection/ see middle image). However, Caravaggio’s work goes beyond the ability to use the projective image, it constitutes a very complex task. Deformations are found in both paintings of Bacchus paintings, due to the use of the lenses (in the inclination of the space, see the face of Bacchus Borghese and the glass wine cellar of Bacchus Ufizzi where the face of the artist can be seen in reflection). For example, the young Bacchus in the Borghese Gallery, a self-portrait of a sick Caravaggio, as a nostos of antiquity, implies the painful reality of the time in which the artist lives5.
In a so-called post-Roman era, “disease” is the loss of classical thought. For Caravaggio, “disease” is translated into chromatic relationships; it means, in addition to his physical condition, colour harmonies: lead yellow (lead-tin yellow) next to perhaps a black copper (copper oxide) and not the vine (vine black) to achieve a specific chromatic harmony implying sickness6. The disease is indicated mainly through colour relations. Antiquity will never be approached, it will be the inaccessible ideal condition of a “healthy” art. I consider this to be the first modern work, in the post-Roman sense of the word. We would even claim that the painter is trying to “hide himself in the disease”. I am also compiling a Short Diary of a Sick Bacchus in parallel with the painting of a Premortem portrait of Gaius Petronius.

Silvia Scaravaggi: You are Assistant Professor at the Athens School of Fine Arts. How is the relationship with your students and how do you see their approach to art? Can you see something new emerging, how is the feeling about art and culture among young contemporary Athens artists?
Yiannis Melanitis: dialectics are at the core of this approach, not meaning that all have to do with logos and a “cause-effect” configuration. Dialects may be silent, too. Art didactics may today only exist in a diversified form, completely different from the years of our own academic study as, in the light of our times, new values are not possible to be stipulated. In the lab, there is no norm for anything, norm is any individual net of references that has to be constructed meticulously. There is no safe road to art, not even reason for making it. Didactics keeps me on my toes.