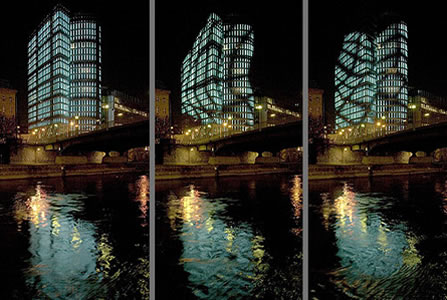 Following on from the first groundbreaking conference on urban screens, Urban Screens 2005, Amsterdam, the conference will feature more than 40 inspirational experts on the global phenomenon set to transform our cities. Urban Screens Manchester 07 looks in to the creation of content, commissioning / funding, curatorship and the architectural possibilities of urban screens in the 21st century.

PUBLIC ARTS + EVENTS PROGRAMME: 11-14 OCTOBER 2007
The conference is accompanied by a dynamic, groundbreaking four-day programme of free outdoor screen and art events; a showcase for the creative future of our cities, featuring the work of over 90 international artists.

Three giant LED screens in city centre Manchester will show a wide range of individual programmes 24-hours a day. The screens will be sited at All Saints’ Gardens on Oxford Road, Exchange Square, and Cathedral Gardens outside Urbis.

The Light Surgeons, a UK-based collective of designers, film makers and musicians, set out to explore the stories and myths surrounding Uncle Sam Wilson, bearded idol and personification of the United States of America. A sizzling multi-screen fusion of documentary filmmaking, genre hopping soundtracks, animation/motion graphics and digital video performance fuses with the stunning, neo-gothic splendour of the Great Hall. The Light Surgeons are best known for their pioneering design of visual displays at clubs, commercial events, music tours & exhibitions. They have been at the cutting edge of multimedia sound and light installations, working across a range of media such as video, 16mm film, photography, print based design, music & spoken narrative.

Part guided tour, part roaming film night, A Wall is a Screen leads its audience through the streets of the city, stopping at previously unnoticed locations where films of different genres are projected. After each film, the equipment is loaded up onto a handcart and the group moves on to the next wall. Working with the North West Film archive at Manchester Metropolitan University, this event includes localised footage that peels back the layers of inner-city history. Members of A Wall is a Screen will also be presenting their work on Day 1 of the conference, during the poster session on creating screen art for an urban & architectural context.

Urban Screens Manchester has been curated by Dr Susanne Jaschko