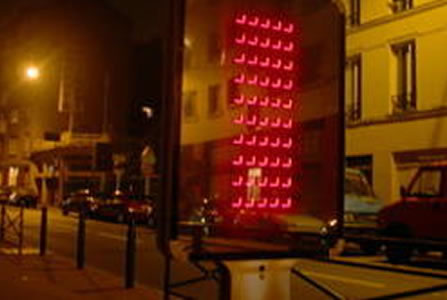 URBAN SCREENS 2005 is an international conference ranging from critical theory to project experiences by researchers and practitioners in the field of Art, Architecture, Urban Studies and Digital Media. The focus is on understanding how the growing infrastructure of large digital displays influences the visual sphere of our public spaces. How can the commercial use of these screens be broadened and culturally curated to contribute to a lively urban society involving the audience interactively?

In the context of the rapidly evolving commercial information sphere of our cities, developers are bringing new digital display technology into the urban landscape like large daylight compatible LED screens or high-tech plasma screens. Meanwhile there is a growing interest in exploring their potential of a non-commercial use, asking for new strategies and cooperations in content production and management. Besides infiltrating some”artcoockies”, lets look at them more in terms of open “screening platforms” and how that can have a social or cultural impact on our urban society!

Public space has always been a place for human interaction, a unique arena for exchange of rituals and communication in a constant process of renewal, challenging the development of society. Its architectural dimension, being a storytelling medium itself, has played a changing role of importance in providing a stage for this interaction. The way the space is inhabited can be read as a participatory process of its audience. The (vanishing) role as space for social and symbolic discourse has been often discussed in urban sociology. Modernization, the growing independence from place and time and the individualization seem to destroy the city rhythm and its social systems. Besides experiments with social networks and new media tools emerged. Starting with the development of virtual cities with its chat rooms and spaces for production of identity, we now face community experiments like collaborative wikis, blogs or mobile phone networks in the growing field of social computing.

Parallel to this development an “event culture” has evolved in the real urban space among the internationally competing cities, focusing on tourism and consumption. Considering the social sustainability of our cities it is necessary to look closer at the livability and openness of public spaces and start to address the urban users as citizens not as passive consumers.

The experience, made in the new digital communication spheres, might serve as an inspiration for this social enhancement. Could large outdoor displays function as experimental “visualization zone” of the fusing of the virtual public spaces and our real world? Can screens function as a new mirror reflecting the public sphere?

URBAN SCREENS 05 wants to launch a discussion about how digital culture can make use of the existing and future screening infrastructure, in terms of art and social or political practices, generating a higher value for its operators and “users”. We want to address the existing commercial predetermination and explore the nuance between art, interventions and entertainment to stimulate a lively culture. Other key issues are: mediated interaction, content management, participation of the local community, public private cooperation, restrictions due to technical limits, and the incorporation of the screens in the architecture of our urban landscape.

The conference aims at an interdisciplinary audience with the intention to exchange experiences and start a network to initiate future collaborations.

Preparation of the event will include the launch of an online discussion on the urban screens mailinglist.

14:00  15:30 Session 2 – Addressing the Social Value and Civic Culture through Participation

Beaming and Streaming: Developing Infrastructure for an Urban Screen through
the Creative Collaborations Project
Frank Abbott in collaboration (Nottingham)

Token Screens or Opportunity for Difference? Art Screens and the
Branding of
the City
Julia Nevárez (New York)

Audiences on the Move – The Bigger Picture
Kate Taylor (Manchester)