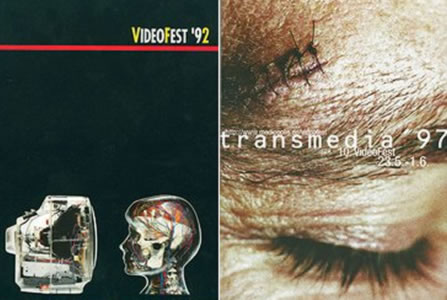 The 20th transmediale festival for art and digital culture runs under the motto ‘unfinish!’, and takes place from January 31 through February 4, 2007, at the Akademie der Künste in Berlin.

Within its theme ‘unfinish!’ transmediale.07 explores the conditions of finiteness and presents a range of artistic means and strategies through which seemingly fixed social and political situations can be kept in flux and open to change.

The festival’s motto relates to artistic works with digital media, in which ‘unfinishing’ is either the inherent drama of being eternally open-ended, or highlights the possibility of continuous transformation and advancement. In the context of this theme, transmediale.07 explores the conditions of finiteness and presents a range of artistic means and strategies through which seemingly fixed situations can be kept in flux and open to change.

The workshop-installation “Edition Edison” is on display during the festival at the foyer of the Academy’s new building on Pariser Platz. The artists Nicholas Bussmann, FM3 (Christiaan Virant, Zhang Jian), Aleks Kolkowski and Nicolas Collins will manufacture artistic storage media, thus commenting the immateriality of digital sounds.

At TESLA (in the Podewils’sches Palais) Japanese media artist Seiko Mikami is re-working her interactive installation “Desire of Codes”: Sculptures made of human skin-like silicone react to the audience, thus showing the connections between human and computerised body.

During the opening ceremony of transmediale.07, French artist Pierre Bastien presents his unique ‘Orchestre mécanique’, an orchestra made of Meccano parts, electro-motors and acoustic instruments from all over the world. According to the type of instrument that is included, each automaton plays a short melody, a rhythm or some harmony repeated in a loop. Institut für Medienarchäologie – Nightline, Richard Chartier / Taylor Deupree – Specification.Fifteen, Edition Edison, Chris Salter – Schwelle 1 & 2 are the other performances

‘Proof of Life’ is a 30-minute audio-visual work by the Belgian visual artist Herman Asselberghs. Its images show the interior of a deserted space, while the viewer’s attention is directed to the sound track. Spoken words reflect on hostage-taking, and sounds of imprisoned life create a claustrophobic atmosphere, inspiring an intense reflexion about the human condition in the age of migration and global media.

‘Cabinet’, a film by Tim Shore (UK), was shot in the US-States of Montana and Wyoming, a sparsely populated and wild natural environment in which Unabomber Theodore Kaczynski wrote his ‘Manifesto’ against the industrial society. The sound track uses historical material from newsreels and educational features, even Edison’s recording of ‘Oh Tannenbaum’. This freely associating film essay reflects on the relationship between nature, culture and power, and on the imaginary space between words and memory.

A thoroughly ‘unfinished’ work is ‘Still Living’, by French artist and programmer Antoine Schmitt: Animated diagrams, similar to the well known graphics used for election analysis and stock exchange rates, are in constant movement – showing autonomously and eternally fluctuating statistics and ratios. While such graphical charts usually promise exact information, in this work they are caught in a nervous game of indecision and permanent alteration.