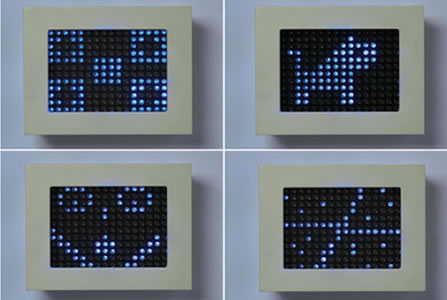 Fabio Paris Art Gallery is proud to present Second Hand Illumination, the gallery’s second solo exhibition of Antonio Cavadini / Tonylight. The exhibition brings together the two currents of the artist’s work: his visual work on light and his engagement with electronic music.

Tonylight is indeed a prominent figure on the Italian 8bit scene, as well as the founder of the Milan node of the international Micromusic.net community. Also known as the “chiptune scene”, 8bit music revolves around cleverly transforming obsolete gaming platforms such as the Nintendo Entertainment System (NES) or the Commodore 64 into audio synthesizers capable of producing nostalgic, lo-fi sounds, and at the same time freeing these sounds from their past and offering an original contribution to the contemporary electronic arena.

Like 8bit music, the light in the series Space LED (2007 – 2009) is also “second hand”, in so far as it comes from various animations visualized on small LED screens manually assembled by the artist himself. These animations – elementary images taken from 8bit videogame cartridges such as Space Invaders – allude to the dawn of the era of digital media, in which the “first electronic sparks” struck our imagination, leaving a permanent legacy of images, aesthetics and colours that we now regard with fond nostalgia.

Second Hand Illumination is completed by Nanonoise (2009), a video projection which is the result of a collaboration between Tonylight, for the sound, and the American artist Jeff Donaldson / Notendo, who accompanies the music with abstract animations produced by an old, modified NES. The exhibition will open with a musical performance by Tonylight.

In December 2009, the artist will exhibit his work in the group exhibition Mediateca Expandida. Playlist, curated by Domenico Quaranta for the LABoral Centro de Arte y Creación Industrial, Gjon, Spain (18 December 2009 – 17 May 2010).