The visual dimension of a text: interview with Visual Editions 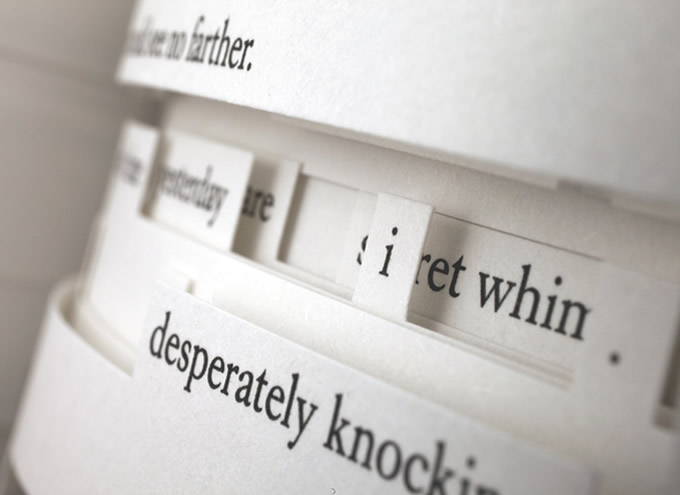 Visual Editions is a book publisher based in London founded in 2010. It has co-founded and directed by Anna Gerber and Britt Iversen. They focus on visual storytelling and they produce both paper and digital books based around the idea of “visual writing”, in which the narrative material is presented in a visual way and the common reading experience is thusly challenged.

They are not nevertheless book designers, they do collaborate with artists and designer for the realization of their works, but they just publish the books.

Among their main publications we can list: Tree of Codes (2010) by J. S Foer, a perfect example of how a text can be ‘sculpted’ into paper, Where You Are (2013) a book of 16 maps created by different writers, thinkers and artists, The Life and Opinions of Tristram Shandy, Gentleman (2010), by L. Sterne and Composition No. 1 (2011), a box set of loose-leaf pages by M. Saporta, also including an iPad app.

The common feature of all these works is a “writing that uses visuals as a key part of the storytelling” and this is what Visual Editions mainly realizes through their books and applications. As they declare, it is all “about making Great Looking Stories”, through visual features applied to writing materials. 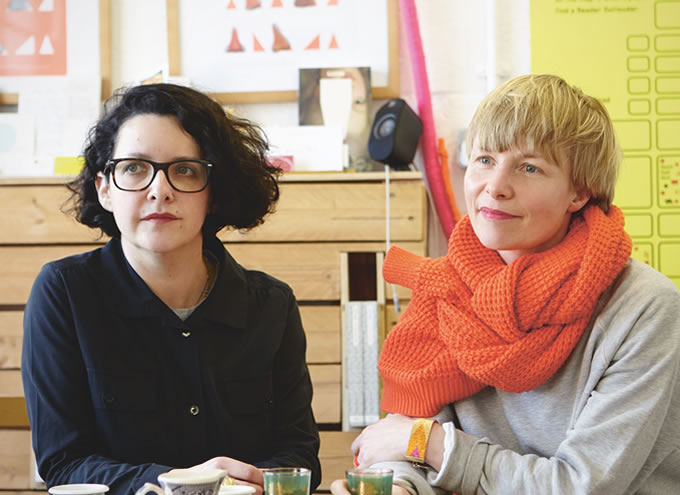 Visual textuality is something that nowadays we normally associate to digital-based texts, like hypertexts in first instance, but also contemporary electronic literature works; visual modality are mostly featured through the use of multimedia tools or non-linear patterns of the text displayed on a screen.

Nevertheless, some visual writing examples, in the sense that a text is displayed in a visual way, existed already in an era precedent to the digital one, long before even hypertexts, in particular at the beginning of the XX century. One of the pioneers in this sense was L. Sterne, but the most famous historical examples are maybe James Joyce, Virginia Woolf, J.L. Borges or the artistic avant-gardes, like Dadaism, Futurism and Surrealism. What was common to all these experimental writers was the questioning, at the very end, of the problem of writing, namely the relationship between expression and content.

In some cases these few literary examples represented pre-digital experiences, while using a printed and paper reading support, while already containing a number of visual features that allow us to consider them an anticipation of hypertextual fiction or a model for digital text, a yet to come textual form that could eventually deploy the full potential of these printed experiments. 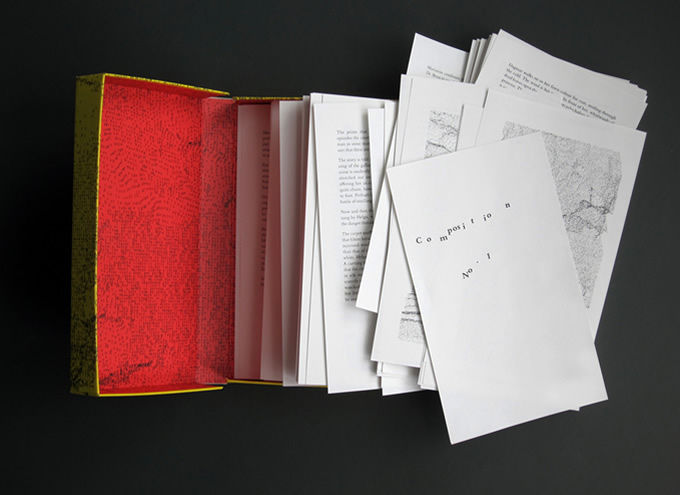 We also discussed this issue directly with the Visual Editions team, asking them few questions about their activity and their innovative publishing approach.

Silvia Bertolotti: You state on your website that: “We champion books both on and off the screen that tell stories in a visual way, making for new kinds of reading experiences. We call it visual writing”. The possibility of shaping the visual aspects of a text, in terms of layout and word distribution, which affects directly linearity is normally a feature of digital and electronic writing, since – to quote Bolter’s words – “what is unnatural in print becomes natural in the electronic medium”[i]. I suppose you don’t agree with that, as printed books can feature as well visual elements. Visual writing can affect something more than the reading experience in your opinion?

Visual Editions: When we’re exploring the visuals of a text, we try to find the best platform for the story. What’s important to us is that we’re faithful to the text in whatever format we’re working in, and we try to make the most of that format. It’s less of a question of being linear or non-linear, more of what works best for the story and our reader’s experience of it.Visual writing is about creating a visual experience out of a piece of text, so the visual entry point is an integral part of the writing, whatever that may be. This makes for what we hope is a playful, surprising, different reading experience.Tree of Codes, for example, was created by Jonathan Safran Foer who literally carved out a new story from his favourite book, The Street of Crocodiles by Bruno Schulz. Tree of Codes relies on the visual aspect of the die-cut pages but also creates a new reading experience. When we first published the book we received countless emails from customers who loved the book, but asked “How do you read this?” However you like!

Silvia Bertolotti:In the history of literature, some authors already overcame boundaries between digital and print, exploring new paths of writing and creating experimental texts, within traditional printed form. Digital tools in some cases accelerated and enhanced a change in reading and writing practices that were already in place before, as some writers already created works anticipating the idea of hypertext or digital text, because of structural features like: the multiplication of numerous points of view, non-linear narrative strategies and non-sequential textual developments. These precursors show that the digital ‘turn’ of textuality is not only a matter of (technology based) support material, but also an inner modification of writing itself. I this is also the case of the works you publish. What is in common to all these experimental writers in your opinion and which are consequently the new challenges for printed books in a digital era?

Visual Editions:Whatever reading experience we create is not a veneer, it’s born from the writing and is embedded in the text. We don’t think of them as tools, as we don’t do what we do for the sake of experimenting. It’s more about finding different kinds of experiences. Composition No. 1, for example, plays with this idea of altered reading experiences. Along with the publication of the book, we organized a mass live reading event at the V&A, which gave readers a change to engage with the text and to create an event out of these different experiences. Events such as these are as much of an extension of the book as the app, which enables the readers to experience the book digitally, where the book lives in a continuous mode of shuffle. 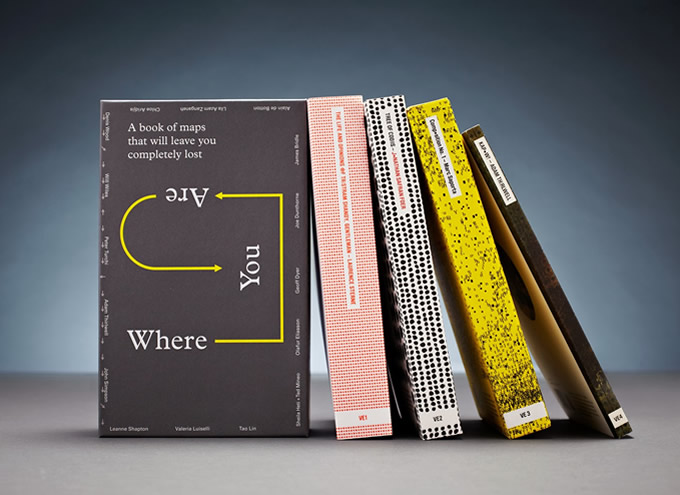 Silvia Bertolotti: You also stated that: “We think there is often a disparity between beautifully produced high end books that go for £100 a pop on the one hand and cheap mass market paperbacks sold in airports on the other. And what we’re trying to do is to collapse those two extremes and make books with wonderful visual writing, beautiful production”. In addition, I think, your activity represents something new also within the new scenarios of digital publishing, which are in fact simply proposing old models and patterns. How do you position yourself in this context as publishing house?

Visual Editions:We’re really interested in pushing the possibilities of technology, and we’re exploring this with a new project in partnership with Google creative lab called Editions at Play, which will be a new platform that only publishes digitally-native books.

Silvia Bertolotti:What is the role of interdisciplinarity (I’m thinking about the contribution of designers or artists) in the realization of your books? Which is the process of creating a Visual Edition’s text?

Visual Editions:It varies from book to book, we tend to operate in a circular nature of text feeding into visual and vice versa. We often like to play matchmaker between writer and designer and allow their work to feed into one another. We don’t have writers working in isolation so much, as we try to ensure a strong connection between the text itself and the visuals, the overall reading experience. 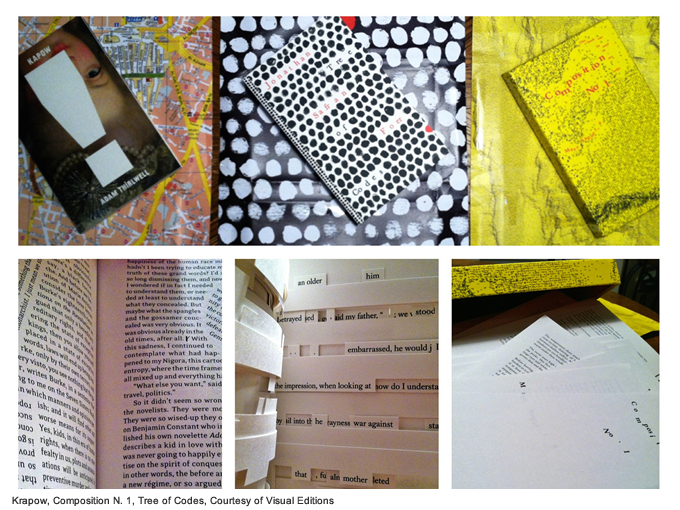 Silvia Bertolotti:It might be argued at some point that, in certain texts, the separation between print and digital is rather inadequate, because sometimes printed text may be much closer to some digital texts, than to other printed texts, and vice versa. Do you think this is the case of the books you publish, where it is not really a matter of materiality, but some narrative features are closer to digital or hypermedia textuality despite the paper support?