The scene is a prism. Notes about ST/LL of Shiro Takatani

Όψις αδήλων τα φαινόμενα – Appearances are a sight of the unseen [Anaxagoras, DK 59 B 21a]

If the theatre, according to the word’s etymology, is the place of the vision, it’s all about understanding what we are going to see and what we actually see on stage, from which point of view experts from the theatre world look at the world and at which level of resolution they see things.

The first possible observation is that we have been turned upside down: it seems that part of the contemporary scene – whose leading exponent is Shiro Takatani – looks at things with a high resolution level, as if the scene was the point of intersection between the infinitely great, the universe, and the infinitely small, the subatomic world.

A transformation of these two ways of seeing takes “shape” on stage. So, what you see on stage is literally what you cannot see in usual conditions. The scene is a light, almost imperceptible reject, a disorientation that produces a “suspension” of the seen and heard so far. 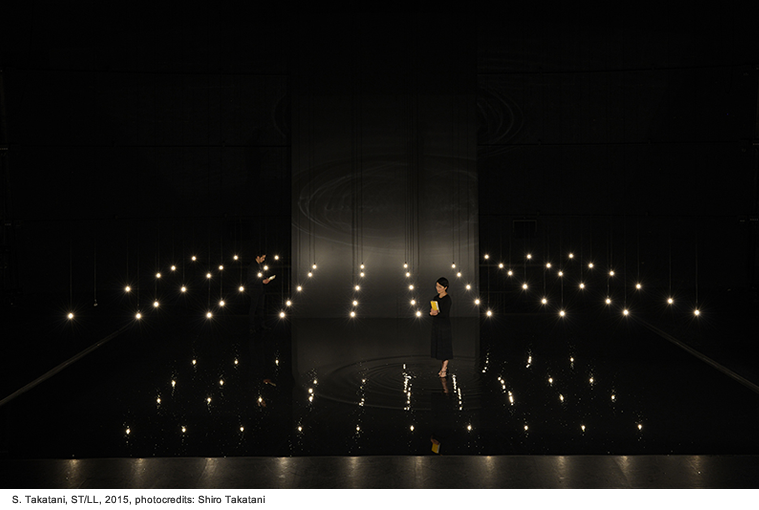 In this context, things are never as they seem. There is always a reject, an unexpected deviation like an astonishment that -thanks to its action on our perception- reveals the consistency of the things, their impermanence.

Around the elements connected with the invisibile aspect and the transformation of the real, are the works of the Japanese and worldwide known artist Shiro Takatani, already leader of the Japanese theatre company Dumb Type and today involved in different projects, from installation – as Silente (2012) and the collaboration with Ryuichi Sakamoto for LIFE – fluid, invisible, inaudible…(2007) –  to live performances, like the  La chambre Claire (2008) and Chroma (2012) and in his last performative production called ST/LL (2015).

The whole structure of this work, which opens from its title on an ambiguity where things are and at the same time are-not, seems a mineral with a precise crystalline structure, a prism system, a geometry of the urgent and systematic perception. In order to bring this system closer, we have two paths before us: we can describe its assembly and follow its operation. Or we can follow the vibration that makes the eye pulsate, suspends it and forces it to look at the structure against the light. This means picking up signals and letting the intensity flow through, which circulates in the material and becomes image or sound; letting those forces exceed on us and pierce us, so that they can survive more than us and despite us, and becoming simply a picture laid in our perception.

Something pulsates again. A subtle web weaves the relationships between these vibrations. 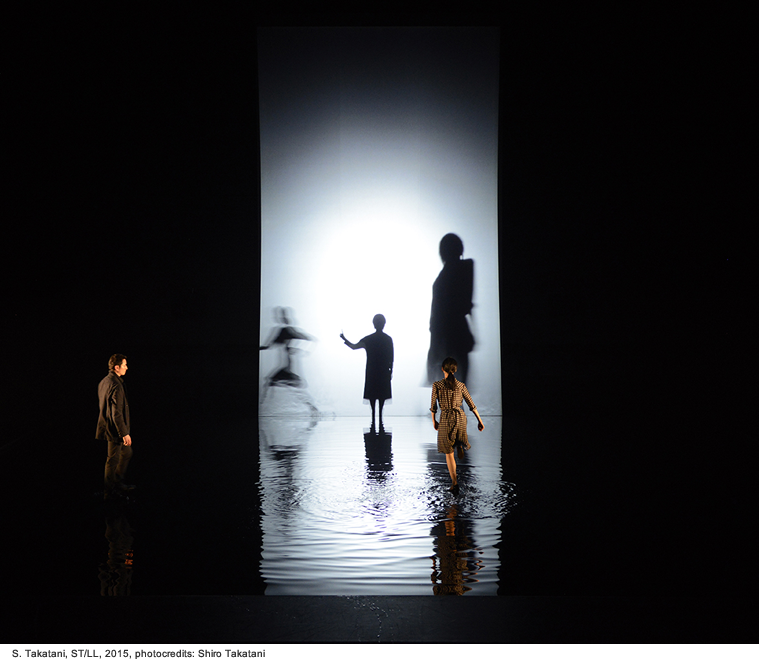 ST/LL opens on a stage with a long set table, perpendicularly to the orchestra, under the eyes of the audience; on the sides of the table there are some chairs. On the background, coinciding with the inner extremity of the table, there is a projection screen developing vertically, like a painting that evokes the Japanese pictorial tradition.

The perimeter of the stage is covered with a veil of water, in which everything reverberates. The whole visual structure of the work develops all around this diaphanous dimension.

A man enters the scene and carries out actions on the table: he moves the cutlery, changes the position of the chairs, makes tiny gestures, which let the audience foretell that an action played on the visible will develop. To the sound of a metronome, two women and then a third one enter the scene and sit at the table making gestures that imitate a meal without food.

The soundscape developing in the opening scene – created by Ryuichi Sakamoto, Marihiko Hara and Takuya Minami – seems to saturate the acoustic space with sound effects that seem to detach from an indistinct background, interrupted by frequency pulses. It looks as if this sound would place the body of the performers around the table and would support their movements. In this soft web of gestures, colours and atmospheric sounds the performers divide the table in individual, different tables, which become a flat surface where they can lie down. When the bodies of the performers move on the table, their image appears on the vertical screen, so that the audience is led into another spatial and visual dimension. This is organised around a progressive reduction of the prospective element, in order to create a two-dimensional space without background.

This musical composition, combining piano and an electronic sound, becomes a melodic track and takes the place of high frequencies which produce a kind of “Doppler Effect”. This makes the sound spread in the theatre: physiologically, when a sound is near to us, its frequencies are higher; vice-versa, when the sound is distant, its frequencies are low. So, the composition is a structure based on frequency pulses that outline a diffraction in the sound-web, always in assonance with a reverberation of the water breaking the visual unity of the image.

Sound and image -on the stage of Takatani’s work- are a prism that decomposes and recreates in the public’s brain.

II. The impermanence of the images

So, in this work there are at least two image levels. The first one reminds of the visible dimension and the other one of the sound dimension.

The visible level acts in the short term; that’s why we can locate it, as it is visible. Not everything in the visual is made of images. There are different kinds of images. Some of them are always the same – here, the visual space is full. Others are fleeing and appear like a glare: ST/LL belongs definitely to this category. So, some images show continuously and others recede. The last ones surface in a visual web and take shape in the dramatic structure of the scene. This happened, for example, in one of ST/LL paintings, where the bodies in flesh and blood on the stage converse with the silhouettes beyond the screen, who refer to their gait; or when the physical objects on the scene -cutlery, books, chairs- fall from the screen and become images without materiality.

The level of the sound image, instead, is characterised by a certain degree of discretion, it acts in the shadows and expresses itself over the long term; that’s why you can’t always locate it, you can’t establish from which point of the space it comes. It’s acousmatic, its peculiarity isn’t the evidence but the depth; its logic isn’t about the event, but about the efficacy.

Both the images -the visual and the sound- aren’t evident as generally understood. On the scene composed by Takatani, the image surfacing in the vision belongs neither to the order of the appearance (the apparent image) nor to the order of the permanence, but concerns the apparition and the impermanence. It is related with the time or, better, with the necessary time for its vibration, which has become visible or audible. You can notice it in the -very touching– section where a traditional Japanese singing accompanies the two figures, a woman and a man, in a geometric grille of lights illuminating the scene and following pulsations that remind of a wave and give the scene a breathing movement. 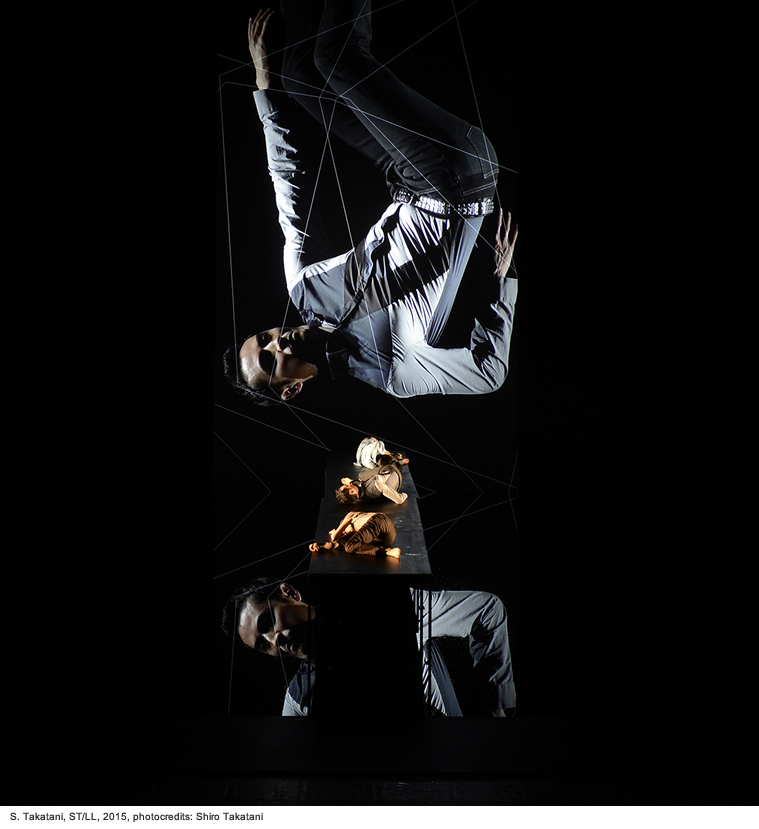 III. The scene as an affective space

The process of becoming, adopted by Shiro Takatani as the basic modulation of the scene, builds an affective space, which takes shape in the body of this double regime of the image.

The viewer is immersed in a space full of continuous vibration. Here the inaudible and the invisible produce their effects on the surface of the audible and the visible: every sound and every light or projection on the screen, even if imperceptible, helps create the tension of the general work texture. It seems that a sound or a light was there, in action but latent, but still imperceptible to the senses: they look like waiting for an input to change their speed; they are waiting for something -even the smallest thing- that allows them to produce effects on a high intensity level and to take on a tangible connotation, a shape.

Like in the last scene introducing the end of the work, where the dancer draws gestures in the air, splitting with the body the veil of mist covering the scene: a body appears like in a haiku, where the beauty reveals all its weakness and its uncertainty. The body explores the imperceptible diagonals of the space and the sound -together with the colours- fluctuates on the veil of mist.

These images mean for us a form of affection: it represents a movement and, at the same time, a change of stage, a transformation of the things to which we all belong as viewer. Every form is just a transition, a phase transition of matter: nothing is tangible and fixed; everything changes. 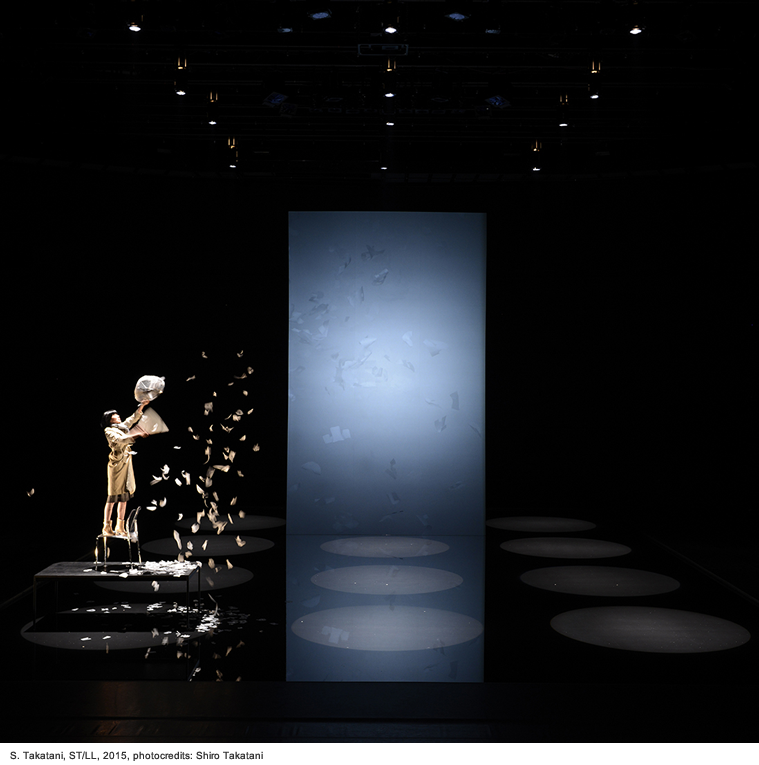 IV. Farewell: the image is the sensation

The fabric of the world is composed by sensations. Shiro Takatani wants us to perceive things without looking for a confirmation, feeling a sensation that asks the awareness not to involve. So, the viewer that is watching ST/LL embodies the art of the presentiment, of imagining: a kind of art that needs the sharpness of mind to understand that out there, in front of him and despite everything, something happens even if everything seems to disappear. This special something invites us to go beyond, to feel the imponderable and to go through its territories.

Finally, here emerges the way: from the stage of (Shiro Takatani’s) mind to another (the viewer’s one), going through the materiality of the scene.

In this form of farewell, the transmission develops: the viewer accesses -through the scene- a perception level that he still hasn’t explored, so that he thinks about all the possible feelings and realizes that the apparent concreteness of all the things perceived is a glare emerging in two infinities: the materiality of the stage and the stage of the mind.

Maybe this is what Takatani recommends to the viewers with his typical delicacy: a way to glimpse – like a radiography of matter- the net that connects every aspect of reality. He invites us to regenerate the view and to perceive the variations of scale in which things appear.

All this happens in the full knowledge that, once separated from the vision, the marvel is still there like a luminous impression, a latent spark that prolongs its effect and remains in the eyes: it’s touching, it moves with the image and leads somewhere else.