Alienation is among the most common effects given by an intensive use of electronic devices and social media platforms on a daily basis; it’s commonly taken for granted that people spend less and less time physically speaking to each other while digitally mediated communication is becoming more and more the most common practice.

This is not a totally new phenomenon and it doesn’t surprise that artists started to address this state of things looking at factory workers and the alienation stemmed from repeating the same actions in an environment designed to make them isolated; for sure, there are many shared features between work in factory and use of online media. In the last few years, artists and curators are critically reflecting not just about the alienating subjects, but also the ones that promote ways to neutralise the negative effects of technology on people – the healthgoth movement is just one of the many outcomes of this attitude.

In the intersection of these themes, we find The Soothing Center, made its debut at Satellite Art Show in Miami the last weekend. Curated by Jesse Firestone, is an artist-made pop up spa aimed at actively combating the disruptive influences of contemporary electronic media-driven stimuli. It’s supposed to be a relaxing area for the stressed visitors of the nearby Art Basel Miami Beach thanks to the works on display by The Institute for New Feeling, Mattia Casalegno, Blaire Edwards, Cole Lu, and Keren Moscovitch. 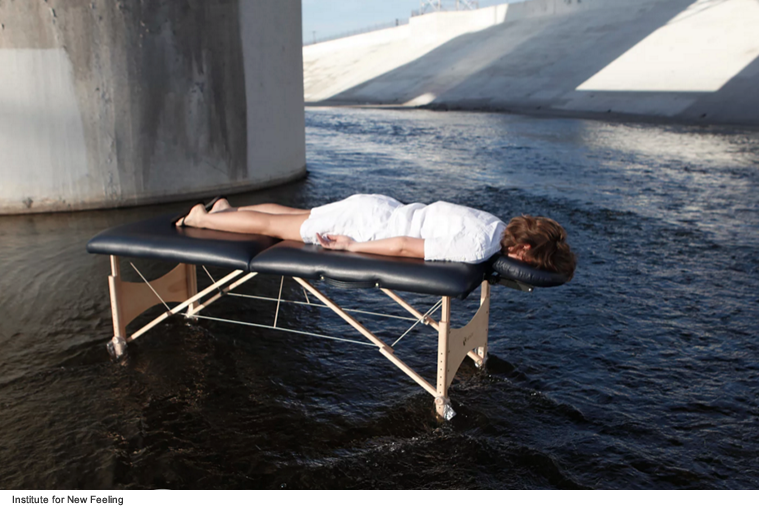 Filippo Lorenzin: What strikes me most about the concept of this project is how much electronic technology is employed in the works that will help the audience dealing with what you define as “the daily bombardment of negative stimulation embedded in our material and media cultures”. Taken the subtle irony in the background for granted, do you think we have to fight fire with fire in order to accomplish a less toxic relationship with our Silicon Valley-driven perception of the world? Do we really have to combat this state of things?

Jesse Firestone: The debut of the Soothing Center is really about a 360 approach, very much in line with the belief that “the task of art is to harmonise the whole” – Kandinsky. With that in mind, the Soothing Center is about recognising and beginning to reclaim our relationship with stimuli in all facets, (including the imperceptible), especially when considering how so much of our sensorial relationships have been co-opted and tainted by the market. I firmly believe that unchecked capitalism is in direct conflict with the body and agency, especially when coupled with media because that’s how our mainstream culture has turned into constant subliminal-psychological conditioning and regurgitated garbage.

So essentially, using electronics in the exhibition is about using the architecture and media of today, because that’s how we are oriented. It’s also important to say that this show is certainly not in opposition to Silicon Valley or our fast-arriving future, but rather about charging/jolting people to feel and continue to be too engaged and feeling in the present – its not just about combating, but guiding and nudging, ideas into the will of the people. (Think of Mattia Casalegno’s breathing mask or the wallpaper that says “subtitles look like this” – all very grounding and no shady business or deceit). My biggest fear is that new technologies, like VR, will to be co-opted by the market, just like the internet, and suddenly prove to be nothing more than an immersive escape. 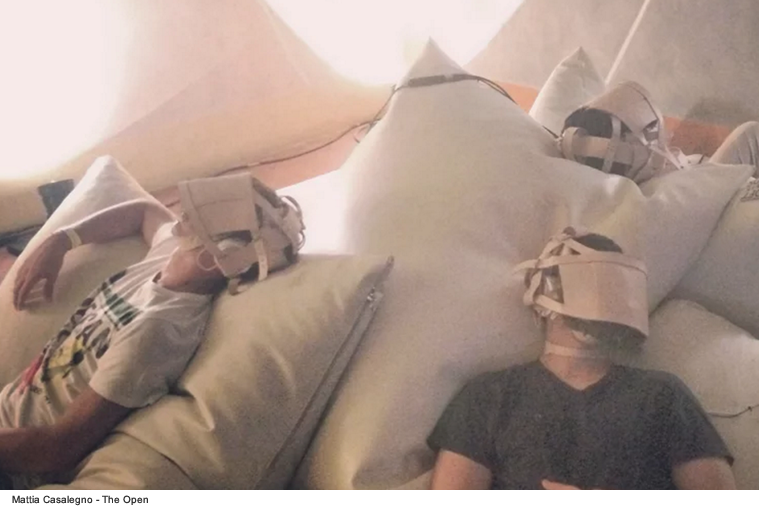 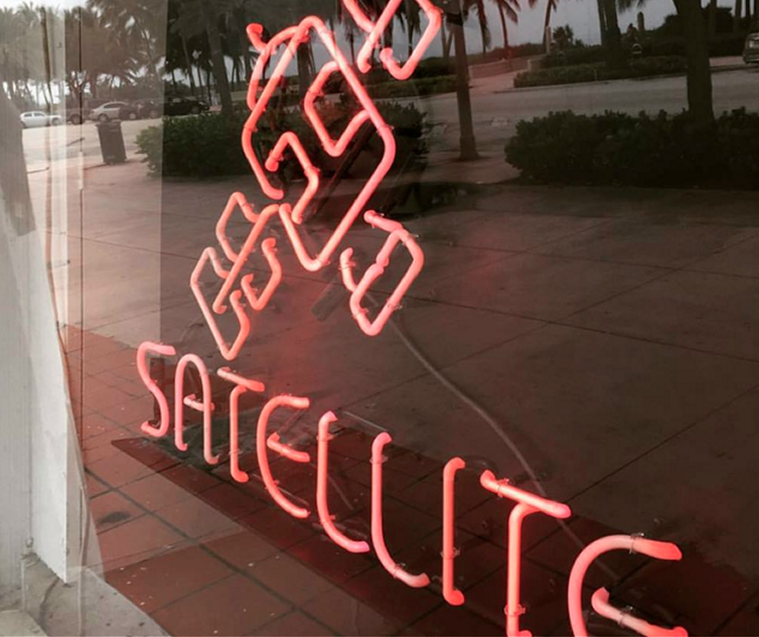 Filippo Lorenzin: Traditionally, one crucial aspect of spas is the fact that they have always been places where people went to socialise, meet friends and colleagues. To me, it seems clear you took in account this custom but I wonder how it can be connected to social media dynamics, in terms of ways to participate in shared experiences and environments. What do you think?

Jesse Firestone: Yes, I definitely envisioned this space as both for introversion as well as opening up a place for vulnerability. I have done a handful of couples therapy sessions with strangers and that’s been remarkable too. I question whether you can really share an experience digitally. I don’t believe that an experience can be shared unless experienced together; however, if the experience is digital and responsive then maybe? But the soothing centre, right now, is abut being present in our corporeal bodies with physical senses, some imperceptible.

Filippo Lorenzin: The works on display will cover a wide range of practices and approaches to our mounting mutual dependency on electronic devices and media-driven platforms; some of them do so in a very subtle way (Blaire Edward‘s herbal remedies and Keren Moscovitch‘s The Space Between, for instance) while others make more evident this critique (Mattia Casalegno‘s The Open, The Institute for New Feeling‘s You May Like and others). How will you present the exhibition to the audience? Will it be shown as a proper spa or as a sarcastic art exhibition? In other terms, do you have any expectation in terms of audience’s reaction?

Jesse Firestone: This exhibition is presented as a showroom, but don’t make mistakes – it is a full function centre. The treatments are all contained in their own spaces and the scope of work in form and content reflects the 360° approach. The Institute’s video and air freshener are in the bathroom, Keren Moscovitch’s The Space Between is in the closet and Mattia Casalegno‘s The Open is in its own room with Cole Lu’s 2D works. This allows for multiple people to experience different sessions without having to worry about the presence of voyeurism. This is not sarcastic, this is so sincere. I’m also making sure that is clear that these experiences are on their own terms, if I was not here to place the mask on people’s head, this whole space could be self-guided. 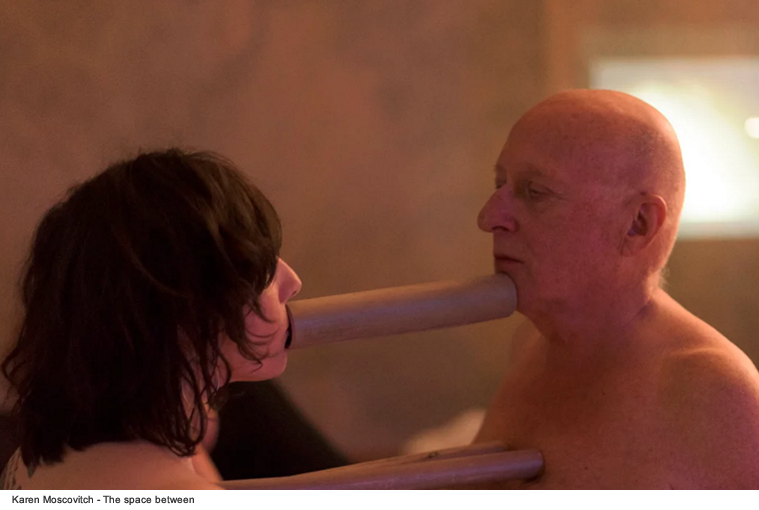 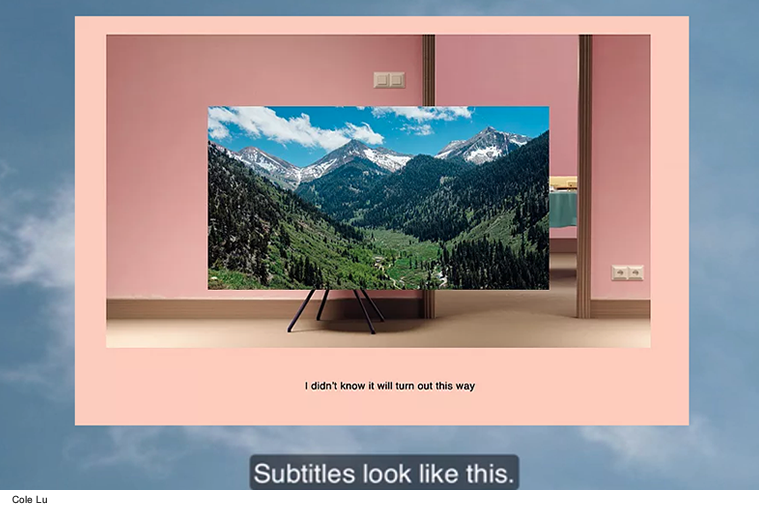 The reaction has been above and beyond what I expected, to be honest; I am happy to say that many people seemed to be as affected by these therapies as I was. We’ve had two short term crying sessions with visitors, particularly after viewing you may like. My emotional barriers have collapsed and that is welcomed but unexpected.