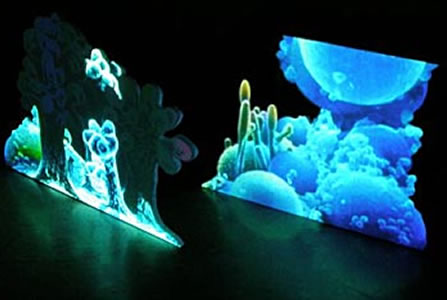 You are invited to the opening of Man Machine at the National Museum of Science and Technology in Stockholm, Friday February 10

In the autumn of 2005 Interactive Institute organised a workshop where five artists collaborated with engineers from the institute. The project was an experiment with short processes where artists and engineers collaborated on the boundary between art and technology.

The project theme was man and machine and the result of eight very intensive days will now be presented in an exhibition at the National Museum of Science and Technology. We will here show five installations by five artists: Sachiko Hayashi, Tina Finnäs, Johan Thurfjell, Christine Ödlund och Drott Johan Löfgren.

Sachiko Hayashi has chosen to work with snow. In her piece Flurry the audience can interact with animated snow. Tina Finnäs allows the audience to step into the spotlight to the tones of Frank Sinatra. Johan Thurfjell has worked with dreams but never let us get a grip of them. In Christine Ödlunds installation we walk inside a projected microscopic landscape and Drott Johan Löfgren lets a rumble fish draw a automatic drawing.