Dominic Wilcox was born in Sunderland, in the North East of England and has a background education in design from the Royal College of Art, Design Products (MA), and visual communication from the Edinburgh College of Art, Visual Communication (BA). He is currently based in London, although he is always on the move delivering talks and workshops around the world, from Cape Town, to Tokyo, to Milan.

Dominic Wilcox is the epitome of the unclassifiable persona; he is an artist, an inventor, a designer, a speaker, and a man who reinvents the normal into something that not necessarily has an actual purpose. His works span from the most odd machines to more practical devices.

Some examples are a series of devices commissioned by Kellogg’s that make our breakfast more entertaining, such as a robot spoon, a cereal bowl that amplifies the sound of Rice Krispies, and a cereal-serving device. In 2012 he created No Place Like Home, GPS shoes commissioned by the Global Footprint project in Northamptonshire (UK).

Inspired by the Wizard of Oz, Dominic has invented these GPS shoes with the aim of guiding the wearer to any destination in the world, thanks to a GPS embedded in the heel. Another hilarious, and I would say quite useful invention is the Finger Nose Stylus, a nose extension ‘finger’ that allows you navigating and scrolling up and down your smartphone while your hands are busy doing something else. 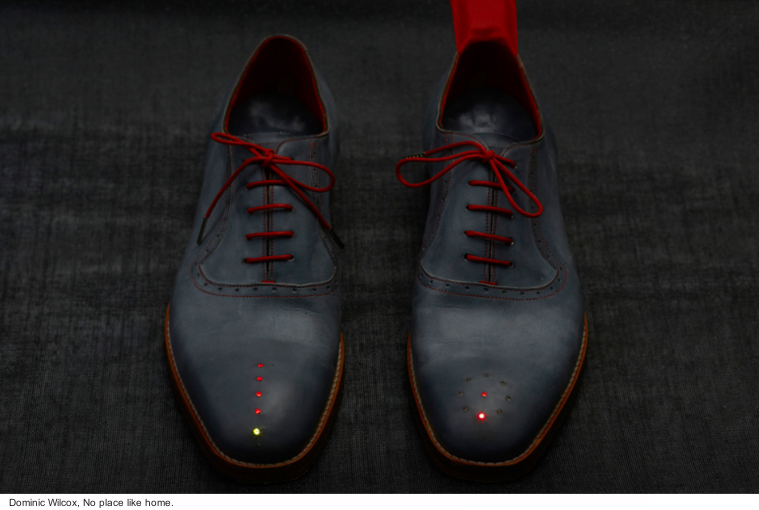 In addition to creating and inventing objects Dominic Wilcox gives talks on creativity, innovation and finding ideas. Recent audiences include brands such as Red Bull and Edelman, and he leads conferences for engineers, NHS health experts and technology researchers. His recent workshops include prestigious venues such as The Design Museum London, NABA University in Milan and Wired Magazine in Tokyo.

I have had the opportunity to ask Dominic some questions about his fascinating world, trying to understand a bit more of this blend of dreamlike inventions and eccentric machines, suspended in a liminal zone between past and present.

Donata Marletta: It looks like you are a great observer of life, as if you were an anthropologist. What strikes me the most is that you observe life from the eyes of a child. What kind of kid were you? Where did you grow up?

Dominic Wilcox: I was a normal child, I made model aeroplanes and played football. I was a good runner and still hold the under 12-year-old 800 metre record in my home city of Sunderland in the North East of England, 2 minutes 17 seconds.

Donata Marletta: Not only your futuristic creations are challenging and provocative, but they recall a sort of melancholic past, which is lost in our dreams. I’m referring in particular to the Watch Sculptures (a series of miniature time-based sculptures in which you use a collection of vintage mechanical watches and customised model figures), By a Thread (cotton thread wound onto a wooden cane), The War Bowl (bowls made using historically accurate model soldiers from famous past battles), and Tea Cup with Cooling Fan (a tea cup with inbuilt a cooling fan so you can cool down your tea), just to mention a few examples. Could you tell us your thoughts on the intermingling between past, present and future? 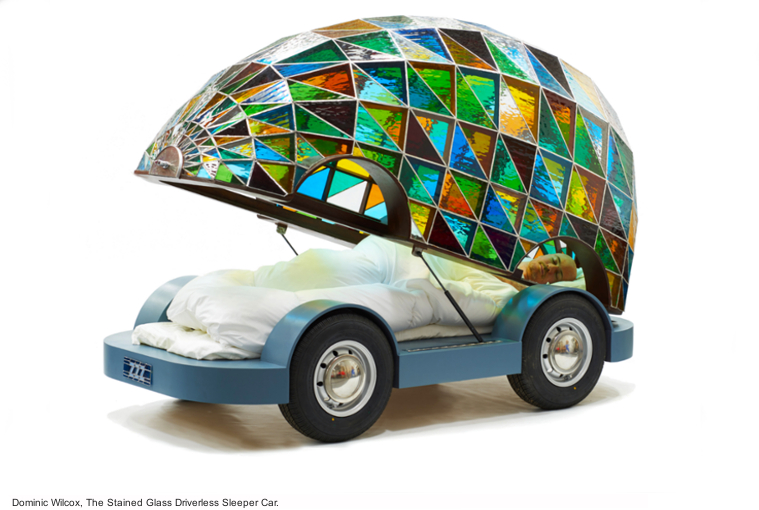 Dominic Wilcox: I’ve always liked thoughtful music. Leonard Cohen, Tom Waits, Nick Cave. They write songs about the full range of life’s events not just the happy things. I think I liked that music because it agreed with my feelings. The slower the song the better, like the song Famous Blue Raincoat by Leonard Cohen. In the best songs there is a mystery to the words and meaning, our imagination fills in the gaps.

I like this approach and it hopefully comes out in my own work. People have made things for thousands of years. It seems obvious that we should take inspiration from what they have done. I sometimes combine these observations with modern technology to add a feeling of magic to an object.

Donata Marletta: I find particularly intriguing the Pre-Handshake Handshake Device, an apparatus that replaces the traditional handshake and aims at encouraging reconciliation between people. What is the main idea behind this device? Why should people use the Pre-Handshake?

Dominic Wilcox: Humour is a powerful way to raise important issues. When people smile then their minds relax their defences and they listen. The Pre- Handshake Handshake Device is designed to highlight the ridiculous situation of people being so angry with another that they can’t even bare to start reconciliation. This device gives them the option of shaking hands without touching skin. It is a start, a first step. 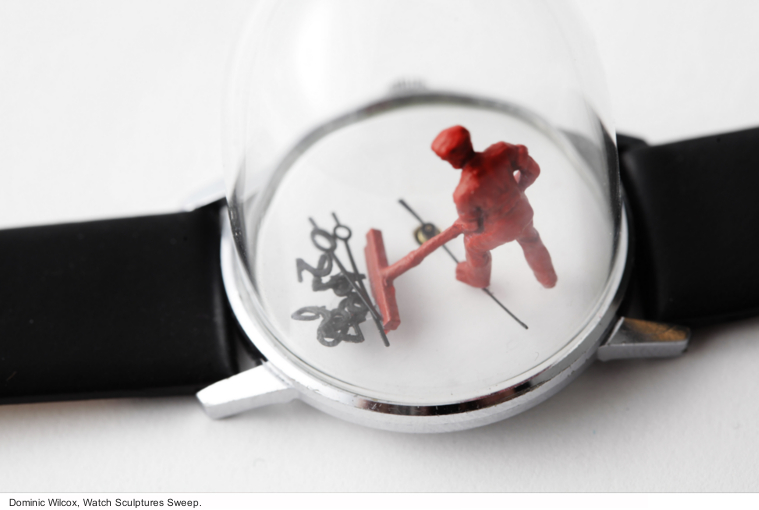 Donata Marletta: As a dog-owner and dog-enthusiast I love the idea of an exhibition exclusively created for dogs. Can you tell us more about the World’s First Art Exhibition for Dogs held at the Ugly Duck Gallery in London last summer? How did the dogs react?

Dominic Wilcox: I designed 4 interactive sculptures for dogs to enjoy, including a giant dog food bowl to jump in and a car window simulator. I also commissioned artists to make some wall based work that dogs would appreciate. The only way to judge a dog’s reaction to an artwork is to count the number of tail wags: there were many.

Dominic Wilcox: I have created my own path in the creative world. I felt like I didn’t quite fit in the art world system and although my education was in design, I wasn’t that interested in mass production or selling lots of the same thing. I started by making work I liked and showing it to the public. Then people and brands started challenging me to be creative on a particular subject they are working on. 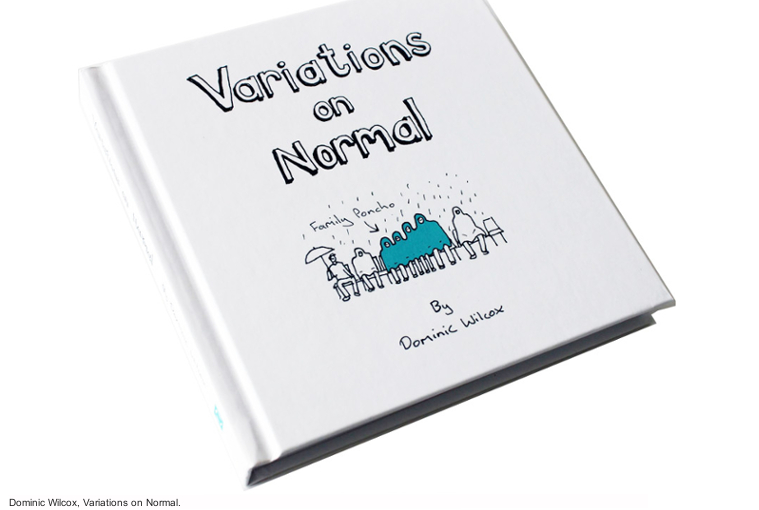 I will only do things I’m happy with and I say no to most enquiries. In the very early days I made very little money, in fact I would lose money doing my work. But I kept on going because I believed in it and I enjoyed doing it. Now I am lucky that I can do what I want, when I want and how I want.

Donata Marletta: “The Variations on Normal Book”, published by Square Peg, is a collection of your inventions ideas crafted in a beautifully sketched book in which you present useful and un-useful creations. What is the main purpose of the book?

Dominic Wilcox: The book is a collection of ideas from my sketchbooks over the years. It was nice to make the effort to combine them together in one book so I can share my observations with others. There is no purpose to the book, but there are a lot of thoughts and ideas within it, communicated in the most direct form, simple drawings. Drawing ideas is to shorten distance between my imagination and the viewers’ imagination, I like that simplicity.

Donata Marletta: Reinventing and transforming the ordinary into challenging, provoking and unique objects seems the core of your work. Could you give us an insight into your creative and productive process?

Dominic Wilcox: Right now I just sit down and think hard. Usually I will write down lists of words connected with the subject I’m focused on. Then I draw some things around the subject and in time ideas start to emerge. I do find a deadline to finish helps me focus and make decisions. 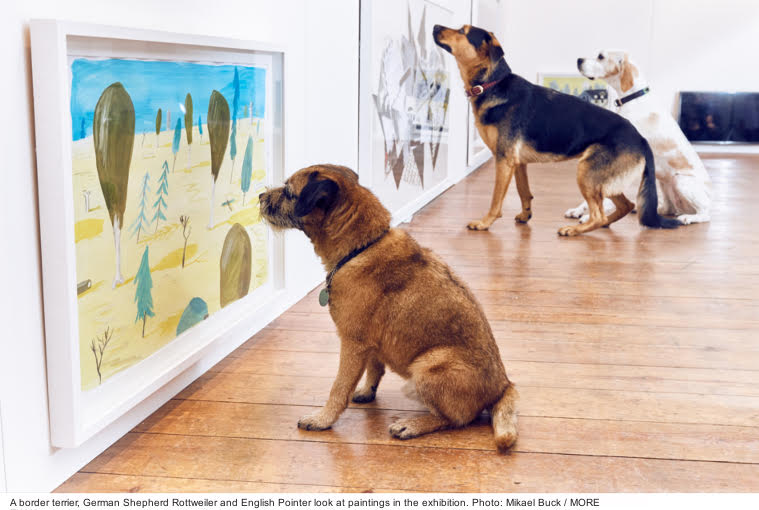 Donata Marletta: Do you ever run out of ideas?

Dominic Wilcox: Yes, I am always on the verge of failure. But if you get nervous and tense at that time then your mind tightens up and it becomes less likely to find ideas. So it’s about keeping your mind in a certain place that creative thoughts thrive. It’s a sort of relaxed focus. Sometimes I do think that I’ve come up with ok ideas but not great, then when I return to them I see ways of adjusting them to make them into better ideas. So there is a method of crafting ideas to improve them, they aren’t always fully formed from the start.