Human-data interaction in the age of Industry 4.0 – part 2

In the previous essay, we analyzed, through data, the man-machine relationship from the user perspective. Analyzing Kim Albrecht’s work, we can explore further perspectives: we can realize that the data are the result of how the machines look at the world and how different their way of seeing and feeling is, compared to ours; we can understand the different ways in which data can be generated and their relationship with the real world.

In fact, they can be obtained from the measurement of parametrizations of the world, but they can also be the result of theoretical speculations on how the world could be built in real contexts, but that we do not have the opportunity to know as individuals, as will be explained through the project Cosmic Web.

At other times the visualizations allow to reveal new interpretations of known phenomena, as in the case of the Science Paths project. Kim Albrecht is a very skilled visual researcher and information designer, working at MetaLab(@)Harvard, [1] focused on giving life to beautiful and meaningful visualizations to reveal hidden relations between data. 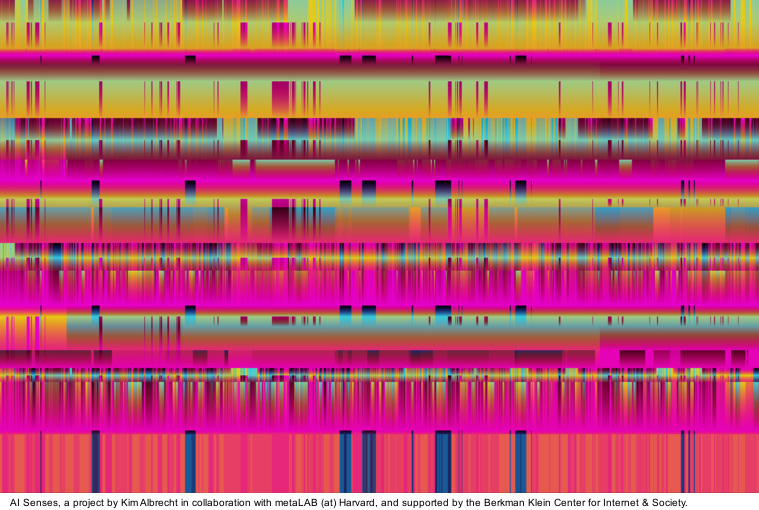 Maddalena Mometti: Which is your personal relationship with data?

Kim Albrecht: I am fascinated by data. We are using data since hundreds of years in scientific discovery, but what it is different now is the fact that through the whole digitalization and spread of interfaces we are generating a vast amount of it. Data is not created manually anymore but automatically and in real time. Today these streams are the waste of our digital lives, of the activities on the Internet while interacting with digital screens. Data creates an entirely new reality, concerning the world we know. And people are becoming aware of their presence.

In my opinion, it is a situation similar to people in the time of Columbus. He didn’t know about America: he just started his travel and discovered this new continent. Through this kind of visual research, I am trying to do the same thing; I am trying to discover new worlds that nobody has seen so far. The difference is that Columbus found a country that is real, a physical place. Instead, data are generated by people, a human product. So this discovery is cultural, we are building and discovering a new a cultural world. And it is highly fascinating to research.

Maddalena Mometti: Which kind of data do you use most?

Kim Albrecht: I work with scientists, such as researchers of the Center for Complex Network research[2] in Boston. They do a lot of data mining[3] and network research. The data I am most interested in is data on the scale of societies. But I also worked with abstract mathematical models, medical data, data about cosmology …  As a visual researcher I able to look at all these different levels and fields through the language of graphics. 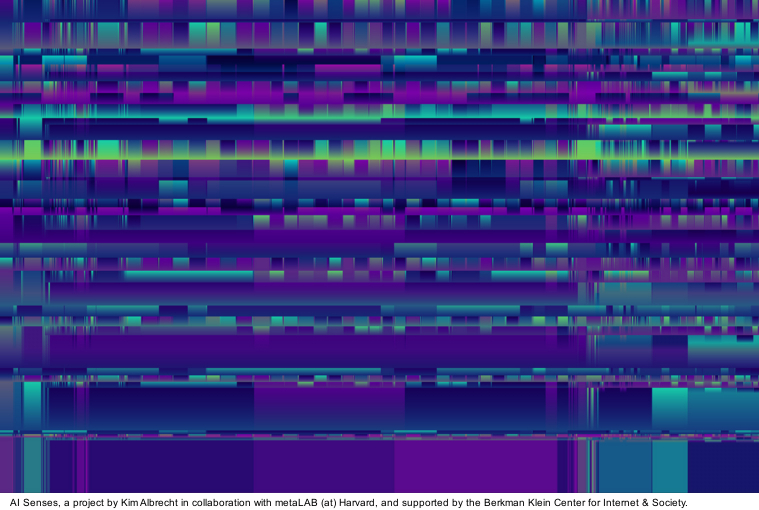 Recently I used the computer to look at itself rather than individuals with my new project called AI Senses. I worked on this in collaboration with my new research group metaLAB(at)Harvard.11 It is a small knowledge-design lab at Harvard, a multidisciplinary team (philosophers, digital artists, and visual researchers, …) and we are experimenting in the networked art and humanities of the 21st Century. Today, culture is so interconnected with the technology that we are using. For the AI Senses project, I am collecting data from the everyday sensors of our phones, tablets, and computers, to understand how the machines are looking at our world.

Maddalena Mometti: Tell us a little more about the AI senses project. [4]

Kim Albrecht: My fundamental idea was to create images of different sensorial inputs of the machine. These graphics function as a visual database of the data stream the computer generates. To do so, I am representing every returned digit rather than the whole number. These graphics might not be entirely readable for humans but give a sense how the machine depicts reality and how that differs to our experience. The graphics did not need to be entirely readable for humans, as they are meant to represent the machine rather than the human view. They are visual depictions of how our day to day computers experience the world.

Something that fascinated me was the impression of accuracy these sensors give. For example, the location sensor often returns latitude and longitude to the accuracy of a few millimeters. If you request the same position again, you get a slightly different position. The machine suggests perfection, but there is something more going on here.

At the same time, the closer you inspect the machine, the more you realize how human it is. All sensors are created, made by humans. The entire construction of the computer is human, and the closer you get the more this becomes visible. 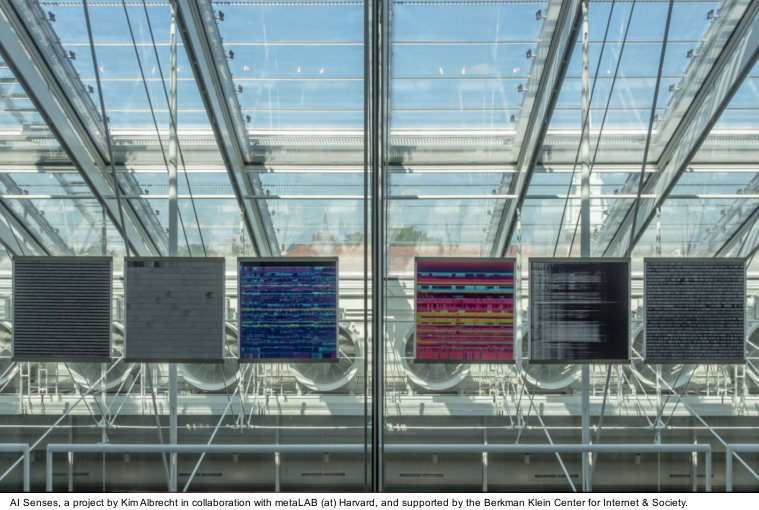 Maddalena Mometti: In your website, you tell us what is meant by Cosmic Web: “The concept of the cosmic web—viewing the universe as a set of discrete galaxies held together by gravity—is deeply ingrained in cosmology. Yet, little is known about architecture of this network or its characteristics. Our research used data from 24,000 galaxies to construct multiple models of the cosmic web, offering complex blueprints for how galaxies fit together. These three interactive visualizations help us imagine the cosmic web, show us differences between the models, and give us insight into the fundamental structure of the universe.”[5] Can you better explain your project on the Cosmic Web?

Kim Albrecht: During my time at the Center for Complex Network Science, we collaborated with a team from MIT that created a simulation of the most extensive structures of the Universe. Many people talk about the ‘Cosmic Web,’ but rather as a metaphor. Our team took the MIT data and calculated different network models and compared these models with observational data. I visualized these different models, creating a visual interface between the scientists and the data.

The simulations consisted out of 24.000 Galaxies which I represented as points and over 100.000 connections between the Galaxies in each model. While the visualization was somewhat a tool for the scientists we published the interface online which created a lot of buzz around the topic. It is fascinating how visualizations can turn scientific studies into something mesmerizing that goes far beyond the scientific context. 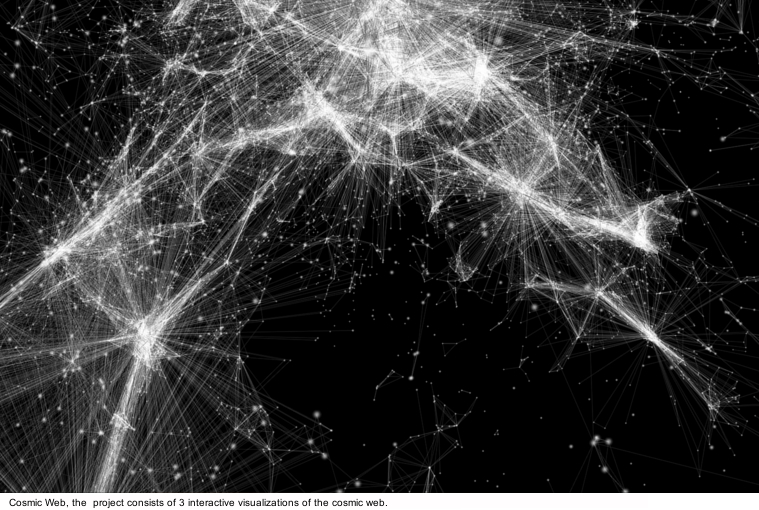 Maddalena Mometti: Do you collect in some way the reactions of people about your visualizations?

Kim Albrecht: Yes, sometimes. But not in a scientific way. I’m less interested in the quantitative data of how long someone stayed on the page, or how they explored the page and more in the qualitative aspects of what people think when they see such a project. Concerning the Cosmic Web project, something very interesting happened. Once we published the project the first week was crazy, we gave interviews every day. There was a lot of talk around the topic. After that views went down and nobody cared about the project anymore. I guess that is the lifecycle of the internet.

Three weeks later the number of visits went up again, and I became curious what was happening here. I visited some of the pages the traffic came from and found many Catholic news sites and blogs talking about the project with headlines like ‘the universe shown from the point of view of God.’ So somehow this scientific visualization became a religious artifact for these people. Which is terrifying but also highly interesting for me. Somehow these graphics reflect what the viewer wants them to reflect. Visualizations are not objective representations but negotiations between the researchers, the collected data, my visual interpretation and the viewer’s standpoint with all their background, thoughts, ideas and beliefs. The different background of people causes what they see in the visualizations and the kind of knowledge they obtain from them.

Maddalena Mometti: Let’s talk about the project Mira.li,[6] that uses your own personal data. Which was the purpose that prompted you to create this project? Do you think we need more rules to preserve our privacy? 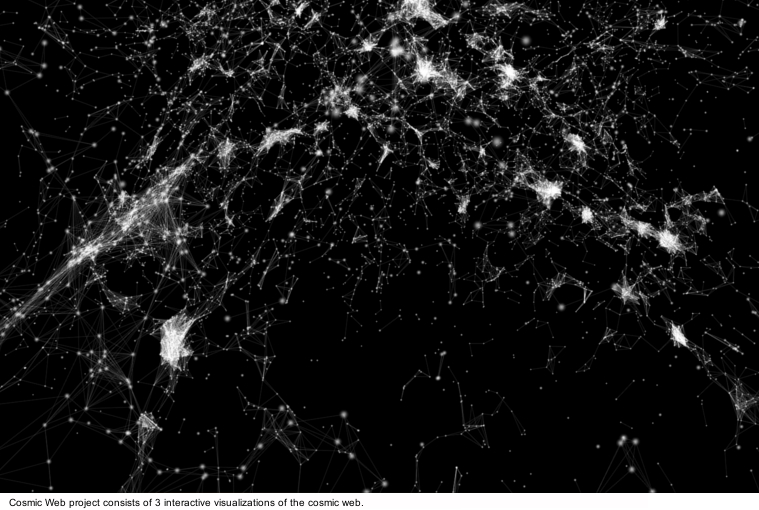 Kim Albrecht: This is one of my first visualization projects. A reflection on the Information Age and what it means for us to be seemingly monitored at all times. I made this before the entire Snowden, NSA scandal became public and even then the evidence of mass surveillance was overwhelming. The visualization shows how much information about us can be collected, even if we do not realize it. All this data, that we are not aware of, is accessible for Google, Facebook, and many companies and institutions. In Europe, you can request the data a company collected about you.

This is great but also difficult in most cases. Very little has been done to educate people to manage their data trails in the right way and to make them conscious about the magnitude of this phenomenon. Visualizations can help in doing this. And I’m working on new projects to create more consciousness around the topic. Today we are not the customers of these tech giants; we are the producers of data for them. The customers are the companies that buy the data. We as users of these pages and services are the producers of the goods they sell, the data. It’s unpaid work we put into these pages with every search, every like and comment. Awareness of these process will be the first step, and I think visualization can play a tremendous role here.

Maddalena Mometti: Which was the goal for which you created the Atlas of Powerlaws project?[7]

Kim Albrecht: Think about the height of humans. Imagine now putting them next to each other: you would notice that the differences in stature are small. An average male is 1.7 meters high; females are slightly smaller around 1.6m. Now, most people are about 20-30 centimeter larger or smaller than that. In the world of powerlaws, most people would be very small and then there would be a few giants. A lot of networks are structured like this. 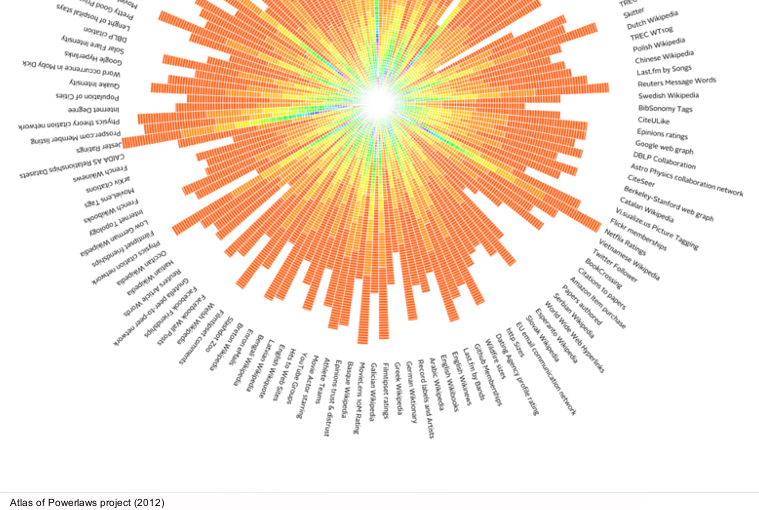 For example, there are very few people that are tremendously famous, like Madonna, Barack Obama or Micheal Jackson, etc.. Most people are known by a mall group of people, and then there are a few that are known to nearly everyone in the network. This is called a powerlaw distribution, and this is true for many networks systems. In the Atlas of powerlaws project, I collected 140 systems with a powerlaw distribution throughout social, technological and natural systems.

Kim Albrecht: Social sciences support the idea that the greatest chances of success occur for an individual when he is young. The research behind the science paths project creates a different opinion about this issue, through a different understanding of time. Social sciences so far looked at time in a linear way. They bring all the things you write and put them on a linear timeline. If you do this in a lot of areas young people in their twenties and thirties are more often successful than older people. In our project time is looked at not linearly but rather each publication is stacked one after another. From a linear perspective to a sequential perspective.

Through this change of the viewpoint, or how to conceptualize time the insight of when someone is successful changes. Success in the view of the research can happen at any time in your career. People are successful when you are young because they tend to do more things, so chances are more numerous. However, this project highlights that success is randomly distributed throughout your career. It is highly fascinating to me how such a change in observation can change the outcomes of a finding.

[1] – Website of the Meta Lab(@)Harvard: https://metalabharvard.github.io, last accessed on 4 December 2017

[2] – Website of the Center for Complex Network research: https://www.barabasilab.com, last accessed on 4 December 2017

[3] – Data mining means extracting significant information and knowledge through analysis systems, automated or not, of large amounts of data.

[7] – Web page of the Atlas of Powerlaws  project: http://kimalbrecht.com/uploads/power-law/atlas.pdf, last accessed on 4 December 2017