Benjamin Gaulon: hacking (and recycling) the culture of obsolescence 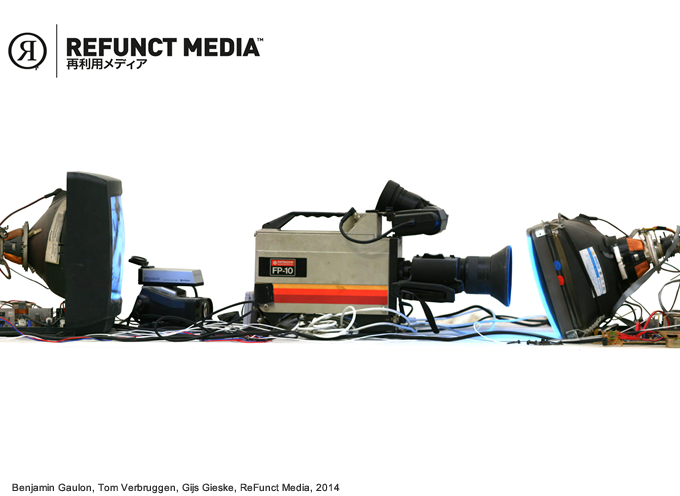 What happens in a technological context where a device becomes obsolete within a very short time? A culture of obsolescence takes place, as regards technological devices and the thinking and behavior of people alike. These are just some of the central themes of the study carried out by the artist, researcher and college lecturer Benjamin Gaulon.

His work is also known as “Recyclism” as his works used to be labelled. The nature of his projects is significantly varied, spanning from softwares, installations, pieces of hardware to web based projects, interactive works and street art interventions that often explore détournement, hacking and recycling practices.

One of the things that help us better understand his artistic and critical research is his effort in the academic field, along with his cutting-edge workshops in Europe and in the US about e-waste and hardware hacking/recycling, in which participants explore the potential of obsolete technologies in a creative way. 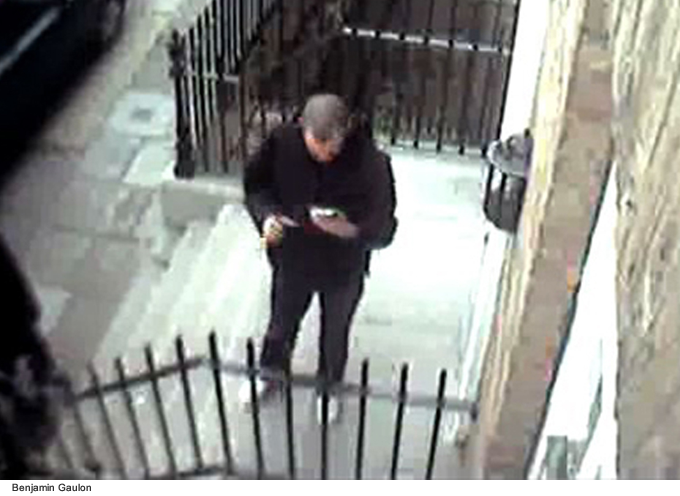 Filippo Lorenzin: Often, your works are about communication technology and its failures: how did you get interested in this topic?

Benjamin Gaulon: This research started around 2001 with a project called digitalrecycling. I wanted to explore the creative process in relation to remix culture, by creating an online platform for digital garbage sharing. Basically, a peer-to-peer network of digital recyclers. I was interested in what people discard and how that digital trash could be re-used by others. The website also served as a sharing platform for remixed artworks, since users were able to upload works made from trash.

But the starting point of this idea came by accident. I trashed a file by mistake, and after restoring it, the file was corrupted (glitched). In a way, this is what happens when you mistakenly throw away a piece of paper and get it back stained by the contents of the bin it was in. With this project, I was also trying to comment on our need for physical metaphors when it comes to operating systems: desktop, folders and the trash bin. This project also caused me to think about digital corruption (now called “Glitch”) and the future and protection of digital data. In other words, a practice-based exploration of media archaeology.

I began exploring data corruption and data bending. As a result, I started a series of projects called Corrupt, which is a set of tools that allows users to glitch files with processing, online, video, and e-publication files. Glitching a document is a great way to expose its inner workings. 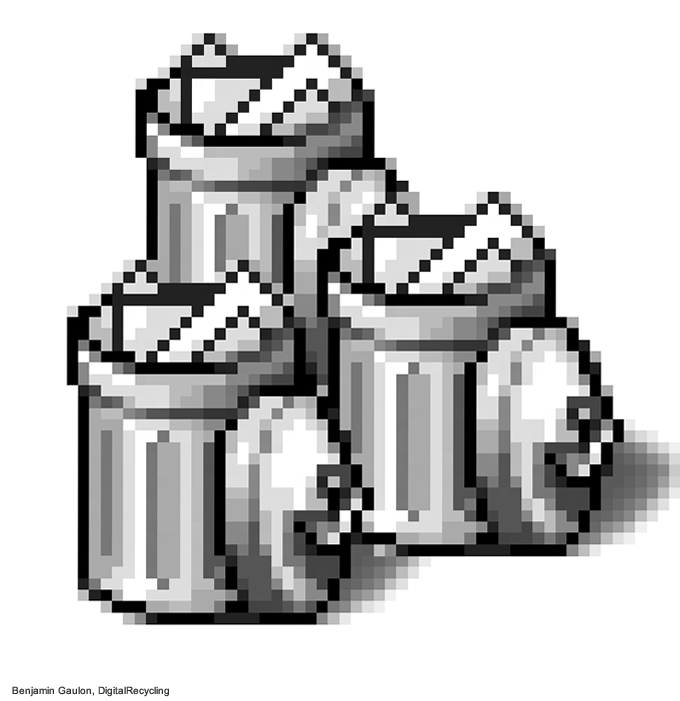 Filippo Lorenzin: Hacking devices for unconventional and artistic purposes is one of your key practices. When have you started to work on this?

Benjamin Gaulon: Following this project on data corruption, I started looking into hardware hacking. The RES (Recycling Entertainment System) project is a musical interface, created in 2004 for six players using NES game controllers found on a flea market. The device combines the idea of sampling and remixing as users are playing hundreds of audio samples to create live music and hardware hacking / recycling.

This project got me consider e-waste in terms of what happens when a new technology creates obsolescence. This led to a series of workshops called the e-waste workshops, where participants explore the potential of hardware hacking as a way to create interactive projects, interfaces, robots, etc…

I believe there is great potential in hardware hacking, considering the exponential growth of e-waste. But since hardware hacking is essentially reverse engineering old tech, it’s also a great way to learn about electronics. In my essay “Hardware hacking and recycling strategies in an age of technological obsolescence”, I develop this concept further. 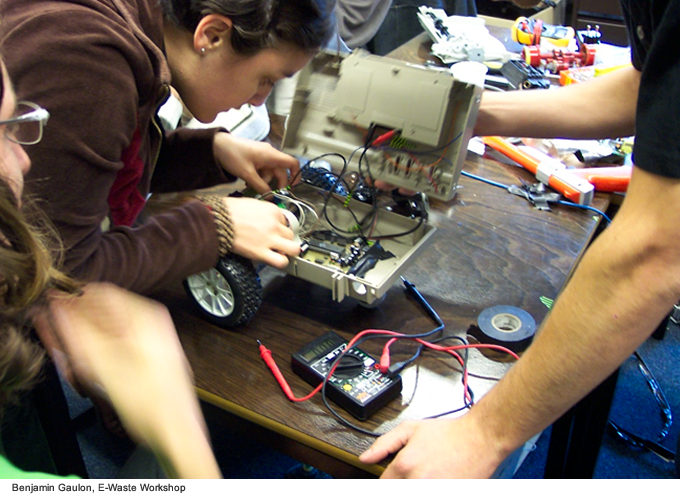 Filippo Lorenzin: Your body of works is really various: installations, softwares, Web projects and so on… Can you tell us how you usually develop a new project?

Benjamin Gaulon: I try not to be fixed on a practice or medium. With each of my projects I try to find the most appropriate outlet. A lot of my popular cultural influences are coming from hip hop, which is a movement that combines many art practices. I believe rap music has forever changed how we make music by introducing sampling and remix as new musical genres. Furthermore, using turntables as instruments was an amazing and influential hardware hack.

In a similar way, and to quote Evan Roth: “In the 1970s, [ . . ] Graffiti writers hacked the subway system to move art around New York City (and later the world) .”

Urban hacking and digital street art are an important part of my research. I began by creating a graffiti robot, the PrintBall in 2004, later surveillance hacking with the 2.4Ghz project, and more recently sonic graffiti with the L.S.D project. I’m interested in the unintended audience and in presenting my work outside conventional exhibition spaces. 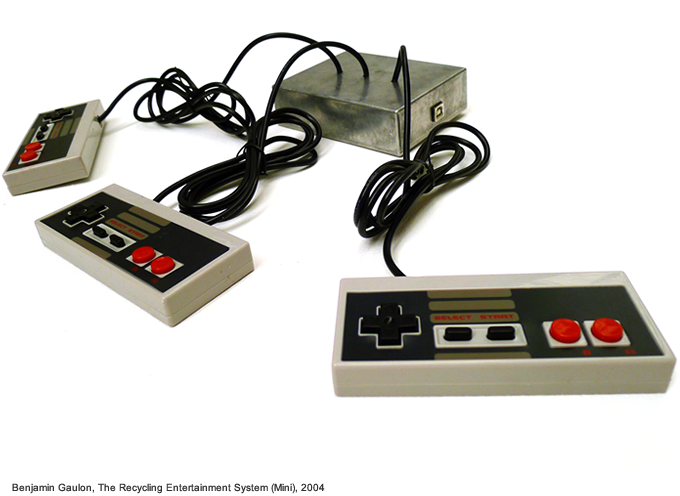 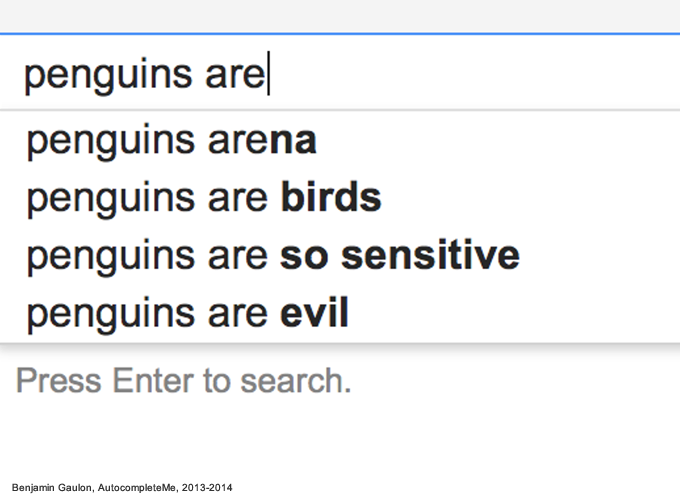 Filippo Lorenzin: You held numerous workshops and in 2011 you also created the Recyclism Hacklab, a workspace focused on DIY hacking practices. Can you tell us about these activities?

Benjamin Gaulon: Yes, I started running the e-waste workshops in 2005 because I consider education an important part of my research. The Recyclism Hacklab was the continuation of the workshops, but in a permanent space in Dublin. This space was also trying to take a Critical Making approach, which often lacks in the Maker movement.

The Hacklab is now closed since I moved to Paris, where I’m the director of the BFA Art, Media and Technology and the MFA Design+Technology at Parsons Paris, the New School for Design. When I was based in Ireland, for about 8 years, I was also teaching and directing DATA (Dublin Art and Technology Association). It is for me, a great way of exploring the theoretical side of my research by getting various input from workshop participants, students, conferences guests, etc…

Filippo Lorenzin: What are you working on these months? What are your plans for the future?

Benjamin Gaulon: I have been working on a collaborative piece for few years called ReFunct Media. It is a series of multimedia installations that (re)uses numerous “obsolete” electronic devices (digital and analogue media players and receivers). These devices are hacked, misused and combined into a large and complex chain of elements. To use an ecological analogy, they “interact” in different symbiotic relationships such as mutualism, parasitism and commensalism. 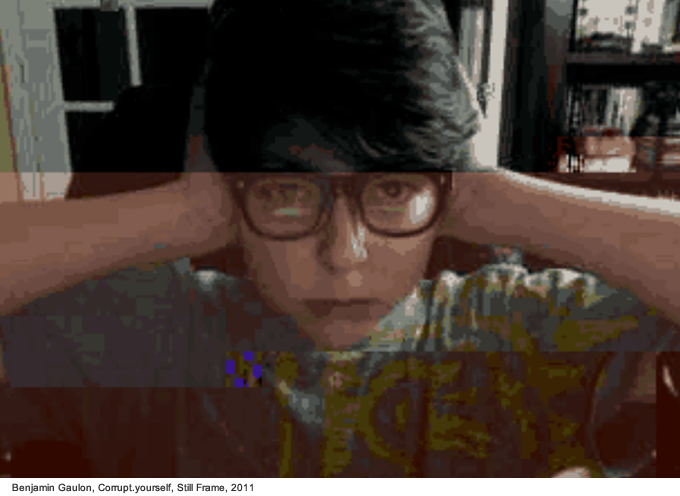 I’m currently working on a second phase of this project, which consists of a modular system for hardware hacking on a smaller scale that will facilitate remote collaborations.

At the same time, I’m also researching, on a theoretical and practical level (via workshops and projects like KindleGlitched and Corrupt.Desktop), a concept I’ve named Retail Poisoning. The term is, based on Torrent poisoning, defines the act of intentionally injecting: critical / corrupt / fake / glitched data and/or hardware in existing online and offline retail outlets.