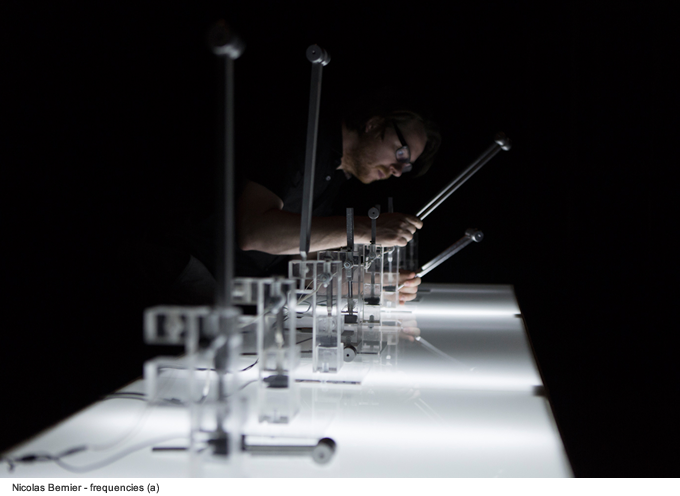 Nicolas Bernier is one of the most interesting and sophisticated artists in the contemporary scenario. His piece frequencies(a) has been awarded 2 days ago with the prestigious Golden Nica for the “Digital Musics and Sound Art” section by the Ars Electronica Festival (http://www.aec.at/prix/gewinner/).

The Golden Nica was the occasion to interview Nicolas about his latest projects and his recent live performance of frequencies(a)  during the Elektra festival in Montreal, directed by the artist and curator Alain Thibault.

Donata Marletta: Can you say something about your sound performance frequencies(a)? What did inspire you for this work?

Nicolas Bernier: The idea to work with the tuning forks came up quite some time ago when I was looking for a way to integrate stable pitches into my sound performances that where mainly noise/object based. I was trying to avoid the use of more traditional musical instruments as tonal elements. As I always worked with obsolete objects and that I am often thinking about the relation between music, sound, old and “new” technology, the use of the tuning fork made perfect sense. It made sense because the tuning fork has been a scientific precision tool in the past, because it is a symbol of tonal music but foremost because it is producing a sound that is close to the pure sinewave, the very primitive sound used in electronic music composition. I then started a collection of all kind of tuning forks, from pre-440hz 19th century to more recent medical ones. I brought my forks everywhere with me (I was doing a bit more improv at some point) and then I made a first album made out of them (strings.lines, 2010, Crónica).

I gradually became totally obsessed with the thing that became my primary musical instrument in a way. But I was still unsatisfied because I couldn’t be as precise as I wanted to, by manually manipulating the forks myself. This is when the idea of automating the forks came up. 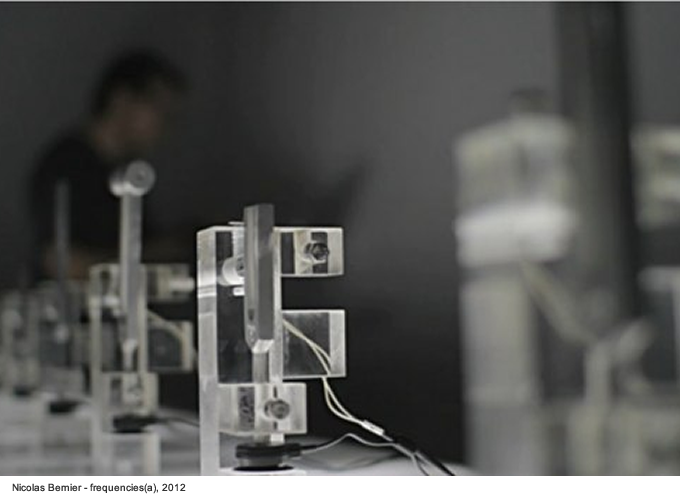 Donata Marletta: You recently presented frequencies(a) at Elektra Festival in Montreal. How did you organise the setting up of the live performance? What kind of equipment did you use?

Nicolas Bernier: Elektra Festival gave me the best condition I could possibly think of for this performance: a small venue (100 persons max.) solely dedicated to the presentation of frequencies (a) for 3 days in a row. This is real luxury as usually the electronic music festivals are quite formatted: big room, big video screen, no time to adjust your setup according to the new environment. There is a reason for that so this is not a critique but the thing is that some pieces have other needs. This is the case of frequencies (a) as it was not built thinking about any standard presentation format but about the specific needs of the piece.  As the piece is dealing with small objects (the tuning forks, small solenoids, gentle sounds, precision), the public needs to be close to the piece. It is built on the principle of intimacy rather than grand spectacularity.

Concerning the equipment, with the help of Laurent Loison and Olivier Lefebvre, we’ve built small acrylic structures holding the tuning forks and the solenoids used to activate the forks. Each of them are linked to contact mic and a light flux coming from the custom lighting table on which they are placed. The table is also hiding the electronics (a usb/dmx board). All the voltage sent to the lights and the solenoids are sent through this board. Then it is all a matter of composition, of organising the audiovisual sequences in time, which I do with Ableton Live and Max For Live.

Donata Marletta: I find very fascinating the way you combine analogue and digital tools. How do you deal with these two contrasting elements?

Nicolas Bernier: This relationship between the electronic and the mechanical/physical was actually the trigger that made me want to work in the field of electronic arts. Today this dialogue between those elements is totally fluent but 10 or 15 years ago, at the apotheosis of the laptop performance, that mix was extremely intriguing as most of the work were either totally digital or not.

Since then my work always relied on the use of physical elements that are processed by the computer. The trigger for an idea or a project always comes from the physical world but the way I want to present this idea always needs the computing capabilities. But most important is for me the balance between the elements, trying not to fall in creating either a completely « natural » nor « digital » work. I actually think there is no distinction to do between the natural or the virtual/artificial. Everything is connected and communicating together, everything is processed in a way or another. For instance, one could see an artificial process by pouring water on a plant.

Donata Marletta: You have such a diverse range of works and collaborations, from dance, theatre, post-rock to visual arts, sound performances and musique concrète. Can you tell me which are your main references and “inspiring muses”?

Nicolas Bernier: I am profoundly interested by the arts and I am not sure I understand why there is some “categories”, if not for political and historical reasons. Nevertheless, I can’t argue with this: my main medium is sound and will most probably always stay sound. But my interest lies everywhere, giving a multiplicity of influences to my work. When I am touched by something, I am not asking myself the question about what category the thing fits in. It is the same thing when I create; I just do what I need to do, not asking myself if it fits this or this category. This is why even if my medium is sound, I am often asking myself questions about the performative, the theatrical, the gestural, the visual and, of course, the musical.

So my muses are everywhere. I tend to be fond of people close to me. Denis Marleau and Stéphanie Jasmin are stage directors that I’ve worked with and who had a strong influence on the way I understand live arts. Olivier Girouard, Jacques Poulin-Denis, Martin Messier and all the visual artists at Perte de Signal (a artist-run centre I am a member of) are all close and inspiring friends. 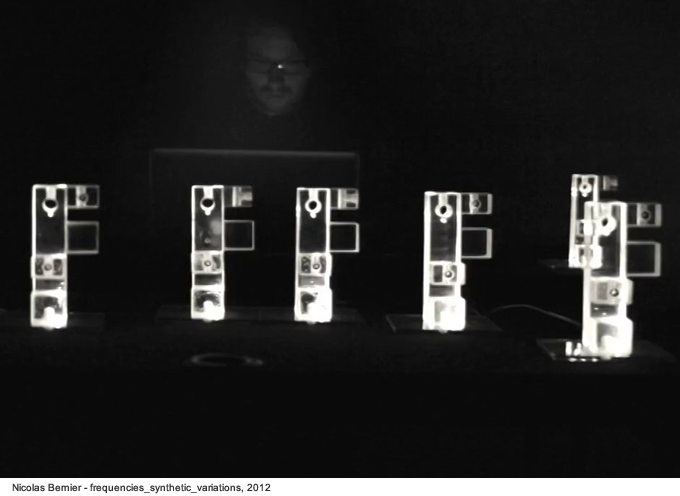 Donata Marletta: You will present the world premiere of frequencies (synthetic variations) at the next edition of Mutek in Montreal. Is this work somehow connected with frequencies(a)? Can you give us an anticipation of this latest piece?

Nicolas Bernier: frequencies is actually a series of works mainly working around the pure/impure dichotomy, declining in 3 parts: acoustic, digital and electronic. I am, in a way, visiting the 3 mains historical evolution stages of the tone. The (a) in the first part stands for “audio” or “acoustic” because the tuning forks are producing an almost pure acoustic tone. The second instalment presented at Mutek (synthetic variations) is entirely based on digital sounds. In this performance I am using the same system used in frequencies (a) except that there is nothing acoustic, no tuning forks, no solenoids and no human performance per se. My first laptop performance in a way but visually translated into physical elements. It is consisting pre-written sequences of synthetic sounds with light synchronised within synthetic material, the small acrylic structures. I will keep the secret of the third part for now… 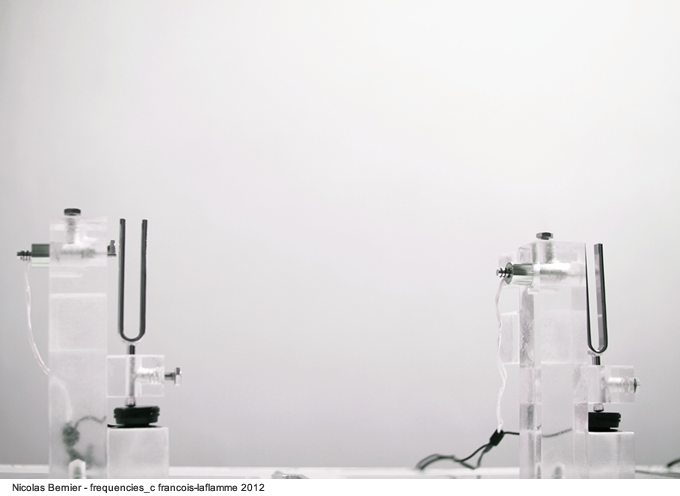 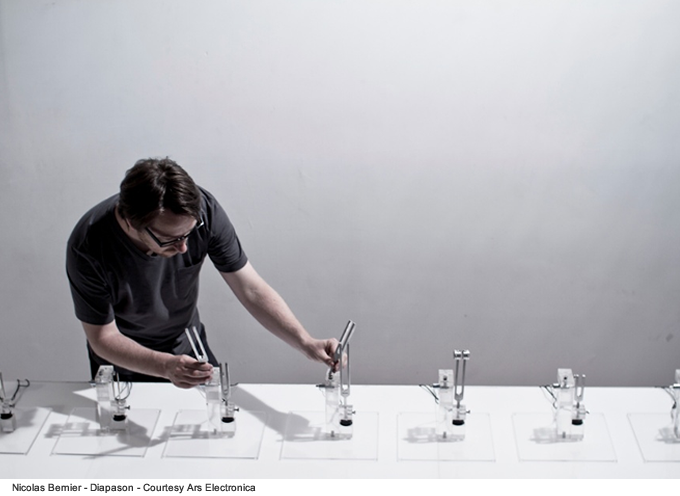