By constructing different kinds of Faraday cages[1] (mostly through shielding integrated in the facade), architects and tech enthusiasts have created “EM-blind” interiors and entire buildings. Constructed between 1991 and 1994 by Swiss architects Herzog & de Meuron, Signal Box is one of such buildings that are “blind” to electromagnetism. It features a Faraday cage as facade design, shielding the control equipment from external events.

These external events come from the surrounding electrical infrastructure used by the railway system. The horizontal copper strips wrapped around the concrete building shell isolate and protect the electrical equipment inside the building from low frequency EM impulses (60Hz). Following the principle of a Faraday cage, the spacing between metal strips is determined by the wavelength of the signal. 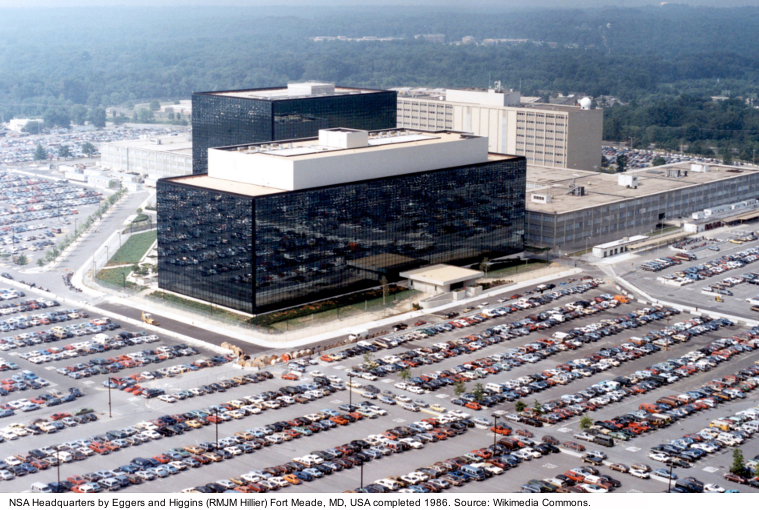 Another interesting example of architecture addressing electromagnetic wave propagation is the National Security Agency Headquarters in Fort Meade, Maryland, US. It is designed to keep sensitive information, the agency is processing, secured in the interior of the building. Not much is known about what goes on in the inside. What one sees is really what one gets – a slick opaque facade reflecting light off the dark glass panels.

Rumor says its facade doubles as a Faraday cage, shielding from eavesdropping by diverse active and passive wireless spying techniques. Such secrecy is a reasonable concern. The technique of wirelessly spying on information systems, also known as TEMPEST, has been widely explored in radio wave communication, notably during the Cold War.

Devices such as Leon Theremin‘s Thing (capacitive membrane + antenna) enabled remote listening by ‘illuminating’ the antenna inside it with a radio signal of the correct frequency. The bug was hidden in the Great Seal which hung at the US ambassador’s Moscow residential study and was activated from the outside by a radio signal of the correct frequency, sent from an external transmitter. It was used by Russian intelligence between 1945 and 1952. 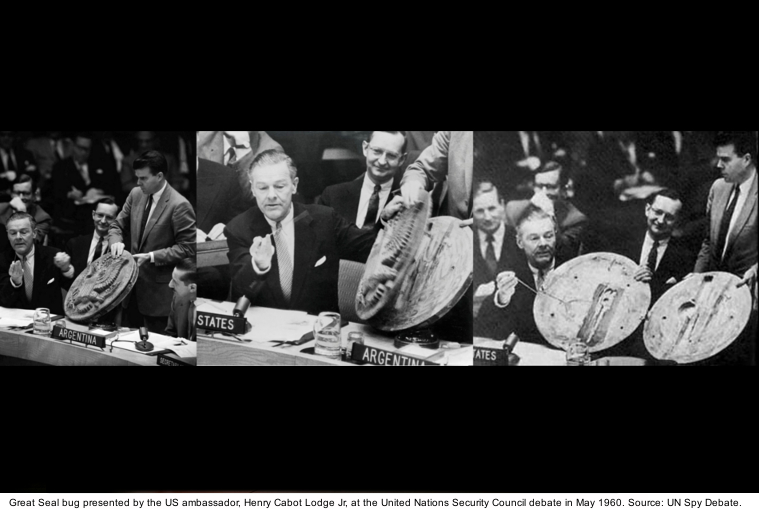 Such wireless intrusions are getting even more common today. More than 9 Petabytes of data was transferred over US wireless carriers in last year alone. All this data is potentially subject to analysis. Thus, when the 2013 Papal Conclave was about to take place, the Sistine Chapel was secured with GSM jammers and Faraday cages in order to ensure its traditional secrecy. These measures were supposed to prevent communication with the outside world as well as eavesdropping – through hidden microphones picking up the discussions or similar tricks.

It might sound less impressive when we imagine that the shielding was installed around equipment and not the entire building, but the EM blocking installations demonstrate how buildings are vulnerable to radiation. It shows the discrepancy between architecture as a shelter from weather and from electromagnetic radiation.

As I have already noted, the problem with electromagnetic radiation is that we cannot see it. Unlike light – the only way we can envision signal propagation is through hardware and software tools which are able to measure and represent signal values in a tangible way. Professional signal monitoring tools can produce heat-maps, represent more complex situations on multiple levels. 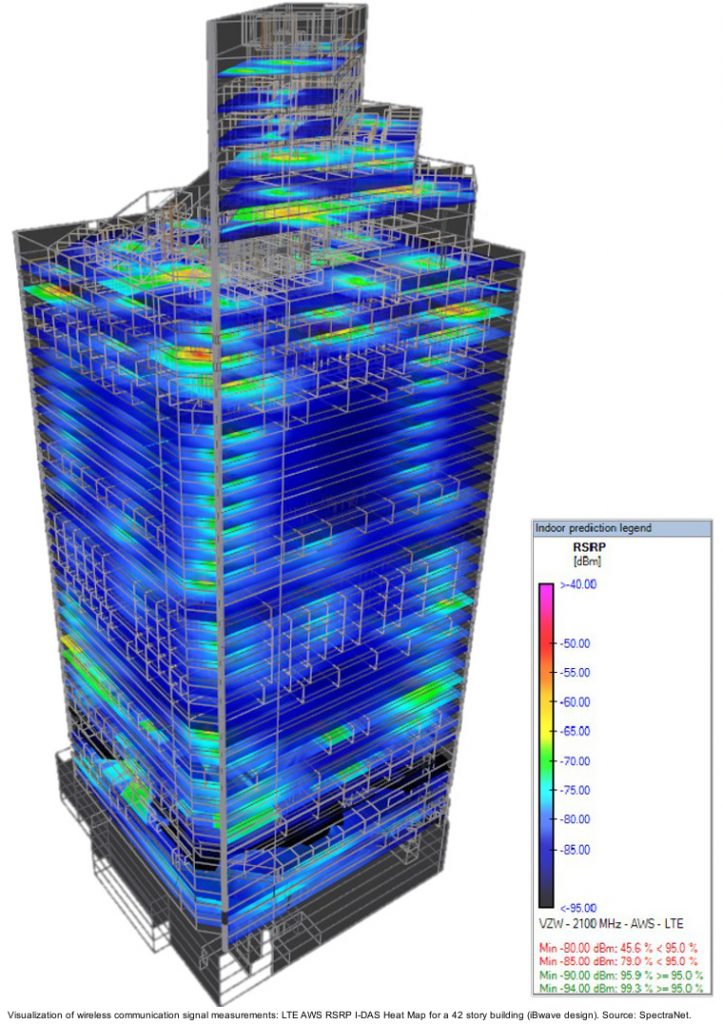 There is also a large number of smartphone applications that are able to do this, in some way. Signal, however, is in constant flux and a visualization is only able to capture one single moment – even if representative – of propagation behavior. It is evident from the above heat map that walls and spatial configuration affect the propagation of wireless signals.

Although in the previous part of this article I stated that there is little interest amongst architects for wireless communication technologies, there are a few interesting proposals that advocate for the design of full spectrum architecture – a design approach that takes into account not only the visible portion of the EM spectrum but also radio waves. These coincide with research done by electrical engineers in the area of metamaterials[2] or frequency selective surfaces. They analyze and recommend an application of building materials according to their permeability to RF signals.

Research into material properties does not stop at existing natural or synthetic materials. The more interesting work done in this area is engineering of metamaterials. These structures could be designed to reflect electromagnetic radiation as Faraday cages, but also to actively change states between blocking and permitting radio waves to pass through them.

A research in Wireless Friendly and Energy Efficient Buildings (WiFEEB), conducted at the University of Sheffield and Czech Tech University, proposed engineering of “intelligent walls” that would be able to respond to changing needs from wireless infrastructure[3]. Through a set of different use-scenarios in an office building, researchers developed a system which relies on cognitive management of infrastructure and a layout of intelligent walls which can reconfigure their properties to achieve the best system performance. 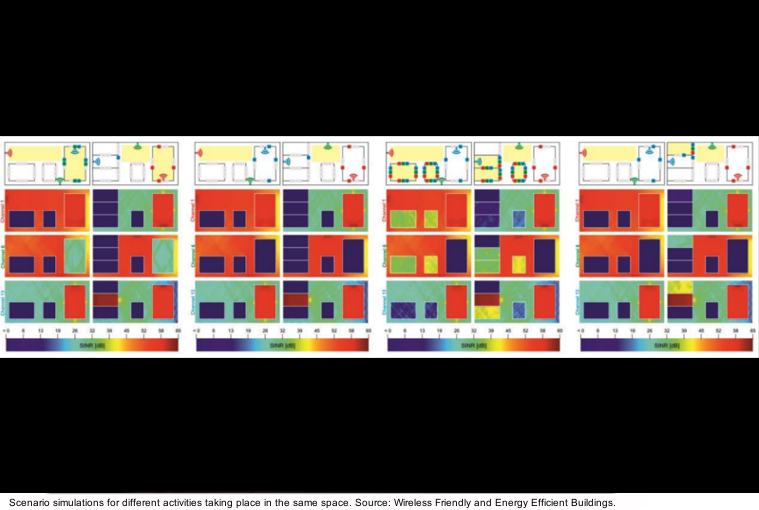 Put simply, these walls and access points control network capacity by switching between transmission and reflection modes and dedicating more bandwidth to certain access points when only parts of the building are used. Intelligent walls are dynamic elements of architecture, reconfigurable to EM propagation needs and scenarios. They are a new method of controlling coverage and interference inside an indoor scenario.

Put the House in the Airplane Mode

It takes time to establish effective ways of communication between communication engineers and architects. Still, a design that is informed by electromagnetic radiation is possible without the emerging technologies like FSS, by simply applying materials according to their reflection or transmission capabilities. Anything conducting has an influence on signal propagation. The effects of closing a door and human occupancy have a significant effect on signal coverage.

These properties were explored in several architectural projects, such as Mathieu Bujnowskyj‘s Space 404. Bujnowskyj proposed to construct mobile pavilions as small, portable spaces that counteract the current tendency for the “all-connected” and smart infrastructure. The main property of these units is to disconnect their users from any digital signal by means of a tent structure that can be easily deployed. 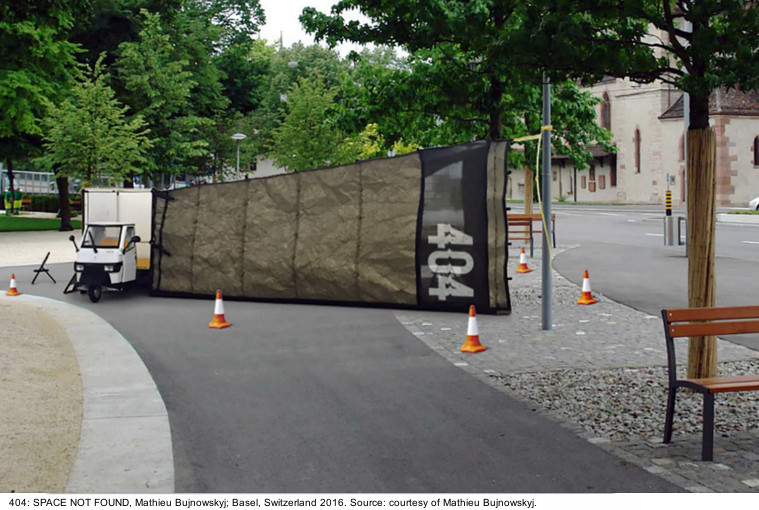 While I have discussed signal blocking already as an insufficiently refined language to address the electromagnetic landscape, Bujnowskyj’s pavilion is essentially a location-specific intervention. Its mobility is the key ingredient to foster thinking about shifting, changing needs for connectivity or privacy, shielding from weather or electromagnetic radiation.

Another interesting example is Space Caviar’s RAM house, a home prototype. The RAM (radar-absorbent material) house proposes an “Airplane Mode” for the home. The authors are searching for “a space of domesticity which isn’t permeable to observation through sentient appliances”. It creates a degree of privacy which is completely unachievable through traditional architecture today.

The fundamental principle is that of a reconfigurable grid, organized by movable shields which filter electromagnetic radiation in the interior. By sliding the shield in, the ritual of privacy is facilitated similar to switching off the smartphone. It is not a permanent Faraday cage but a space of selective autonomy from wireless communication. 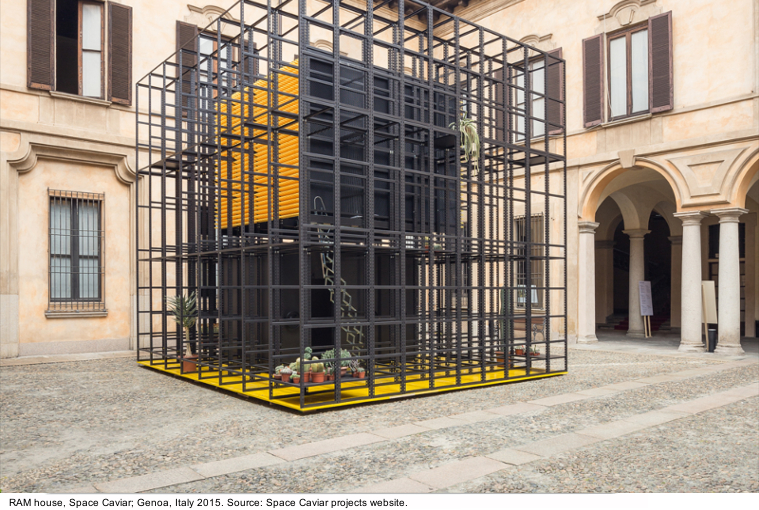 When we think about architectural renderings of electromagnetic radiation, we often imagine strange, wave-shaped installations and interventions, in which the intensity of radio signal is represented by light, sound, movement[4], etc. While working against the arrogance to the omnipresence of wireless communication and other radio signals around us, these works have created a new kind of aesthetic which still does not talk very clearly to a designer of buildings.

Interactive installations that react to the presence of wireless signals are a way to experience this presence, but they fall short of serving as a design guideline for full-spectrum architecture. There is a discrepancy between how these waves are treated as found phenomena to play with in art and design installations, and their presence as infrastructure to plan in the design process.

Such discrepancy is at the same time an opportunity to rethink the way we deal with infrastructures in design. Electromagnetic radiation is a measurable phenomenon, the presence of which we can capture and visualize with a number of tools. We should thus be able to go beyond discussing shelter from electromagnetic radiation, just as we think of architecture beyond caves. 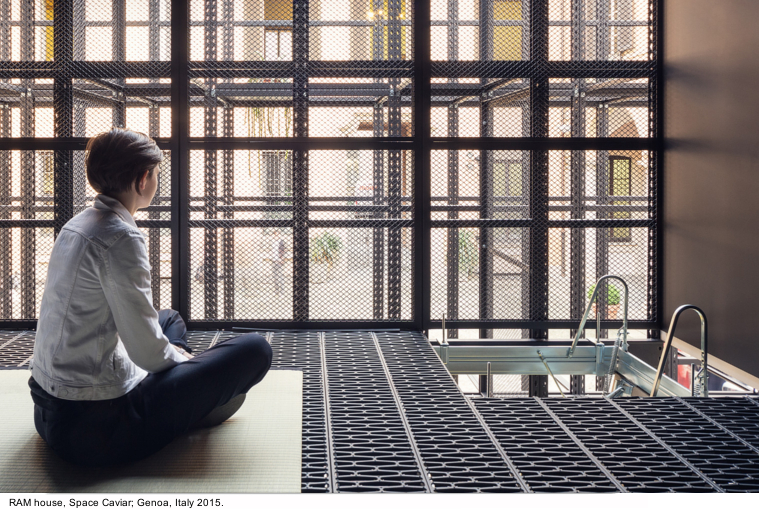 The presented examples, if rather unconventional, illustrate the way to take electromagnetic radiation in buildings seriously. We have seen extensive research done in terms of materials, metamaterials and possible use scenarios in terms of connectivity. We have also seen the use of indoor position tracking as a way to examine data traffic landscapes. These two fields, communication engineering and design need to exchange more about their problems, techniques and tools.

[1] – A Faraday cage is an enclosure made of conductive material (a mesh), which is able to block electromagnetic signals through the electric charges within the cage’s conducting material cancelling the external electrical field’s effect in the cage’s interior.

[2] – A metamaterial is a material engineered to have a property that derives not from base materials, but from their newly designed structures.

[4] – For example, see “The Atlas of Electromagnetic Space”, by Bestiario, http://spectrumatlas.org/