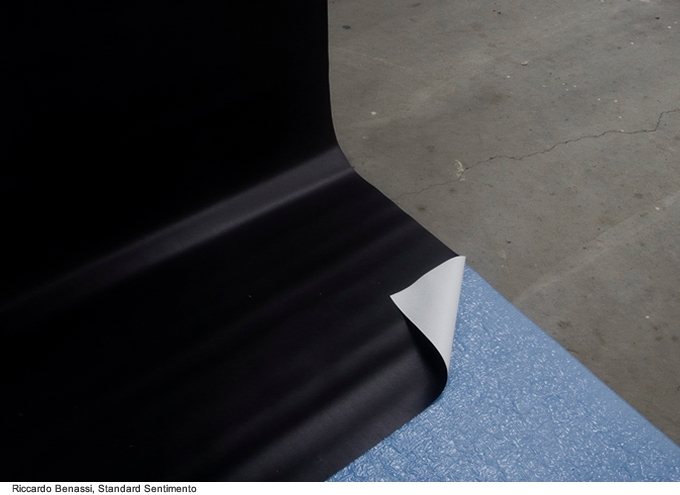 Riccardo Benassi is an artist who can be considered halfway between a musician, a performer, a writer and a designer of experiences. His works are always the result of an intensive exchange with another individual, be it a curator, another artist or the publisher of one of his numerous publications.

He places his works in interstitial spaces, as he often declares, and it does so, after having digested and assimilated an endless array of information. The result is always a synthesis of elements – colors, materials, sounds, written words – which confer to the work a calm composure, almost cryptic, but if reread and re-assimilated, it stimulates the brain to look for that missing piece that will reveal its full meaning. It’s interesting, because that little element is just suggested, but must be calmly searched in the mind of the beholder.

One of the most fascinating aspects of his work is related to the space/time relationship. Benassi was born on the banks of the river Po, like me. I understand what it means to wake up in the morning overwhelmed by fog and then back to bed still with fog. The colors, the faces, the fields of the Po Valley, are always blurred, and perhaps this steam sometimes enters the works, making it evanescent and undressing it of unnecessary details, showing only the outline. Benassi is always on the move: he lives in Berlin but once he told me that he never managed to spend more than two months in a row in that city. Maybe he has become one of those furniture pieces that make up his own work, jumping from mind to mind to suggest new experiences to those who want to take time to observe. 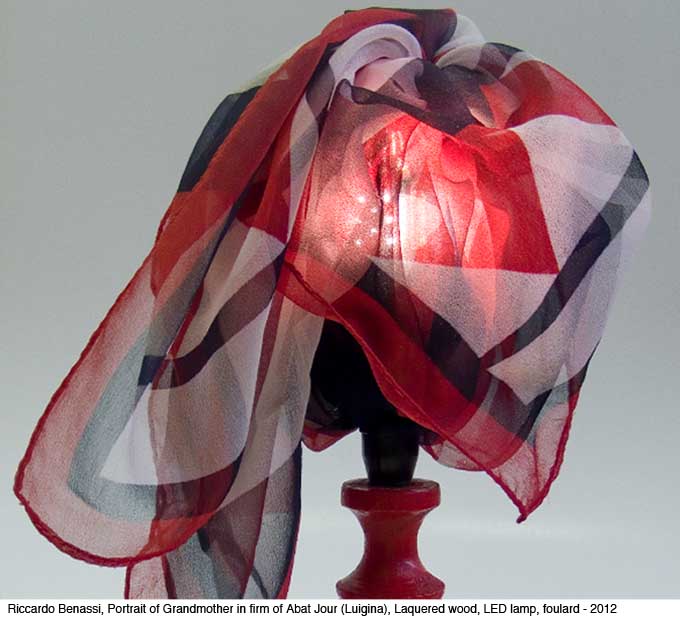 Alessandra Saviotti: Let’s start from your website. When opened, we are hit by a particular buzz, which becomes increasingly obsessive, consisting of a superposition of nearly all of your sound interventions. Why did you decide to “annoy” those who approach your work?

Riccardo Benassi: What? It happened to you too? I thought of a programming problem which only some users had (Windows and BlackBerry)… But if you confirm it happened with an Apple computer, then the partial error is actually total, the machine has made fun of me after I have tried for years to make fun of her. And now, what should I do? Should I fix it or leave it this way?

Alessandra Saviotti: I thought it could have been an error. But I think you should leave it this way (I am a Windows user). After having tried a couple of times to desperately find the off button, and not having found a solution, I closed the website and realized how much the machine was making fun of me. But also of you and of all of us. Then I opened it again, I listened to all of it and I found a sense with the last try. The work proposed a “nuisance”. Thin, but always bothering.

Riccardo Benassi: Ok, I’m heartened to know that you’re a Windows user, because the beauty of the partial error is that it allows the website to behave differently depending on the user it encounters, and then frees it from the need to meet a standard. Of course, probably it takes away a slice from public consultation, but small sacrifices must be made, you know. Compared to what you define as “nuisance”, maybe there is a connection, but it is totally unconscious. The idea is to create new situations, and the hassle is a side effect, it is the minimum effort required from the public to settle down and to deal with the unexpected. I am one of those who believe that without a minimum climb is impossible to enjoy the descent, and therefore that each peak is only half the journey. 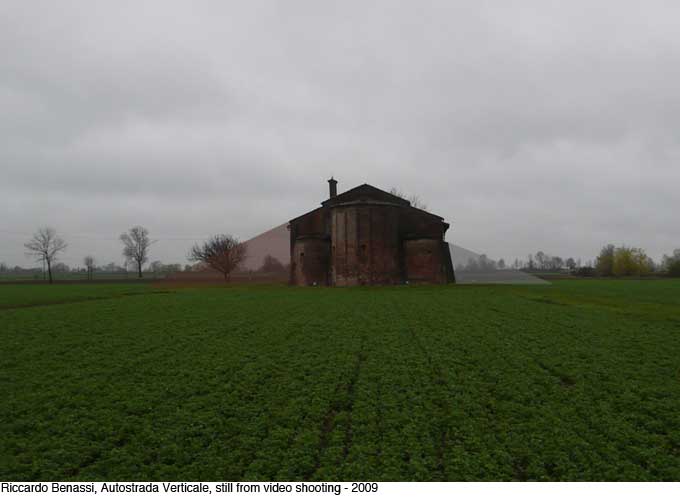 Alessandra Saviotti: Once you told me that the colors you chose, especially for the installations where you use felt – such as Collective Prearrangement, Variable Countdown (2010) or Autostrada Verticale (2009) just to mention a visual reference – are the colors that keep you company during your travels across the highway: green, gray and blue. I must admit that I have been impressed by your statement: considering an experience like a journey as a fusion of colors seemed to me so poetic but, at the same time, very hard and “contemporary”. It is like considering memories just as blurred spots of color. What do you think?

Riccardo Benassi: Maybe they are ideas of plausible colors – more than precise colors – which then I find in industrial products and recognize. These ideas have been camping for years in my subconscious, are the synthesis of highway landscapes in motion and endless plains where I grew up and where I witnessed the second marriage of agriculture: after the one with the mechanics, the one with chemistry. But I think it’s a chromatic reduction shared by anyone who grew up in those places, who has had an experience of nature, stemming from fog, asphalt, from social housing in reinforced concrete. The relocation of domination – by Capital – from nature’s to the machine is a way to override the desire, to sedate it with artifacts. When travelling on the highway, especially the two-dimensionality of what is seen out of the window offers a comforting version of reality, immobilized and not phenomenal, where it seems that everything is fine – everything in its right place and at ease. Almost as works of art in an exhibition space, where the solidarity, which exists between order and disorder, is incredibly obvious.

Alessandra Saviotti: Architecture, sound and written words are three elements often combined in your works. I am thinking ofStandard Sentimento (2011) or Quel che serve ad un pavimento per trasformarsi in pista da ballo (noi) (2011).What leads you to perceive these elements in relationship to one another?

Riccardo Benassi:Architecture, sound and written words are not pre-built units, they are areas of intervention: I tend to take for granted, for example, that a blank page is the equivalent of an indoor space, so as a written text is the annotation of sound, and therefore a musical score. I believe they represent – in themselves – what is already there in the space before my arrival. I study what is already there, for the simple fact of being able to then modify it for my own purposes – often on installations but also narrations – what might be called “drawbridges”. These are routed to the people who deal with my work, meeting them somewhere, even half way. Recently, I realized that more than drawbridges these are trampolines and so, if by chance you meet someone, you always do it in the air. 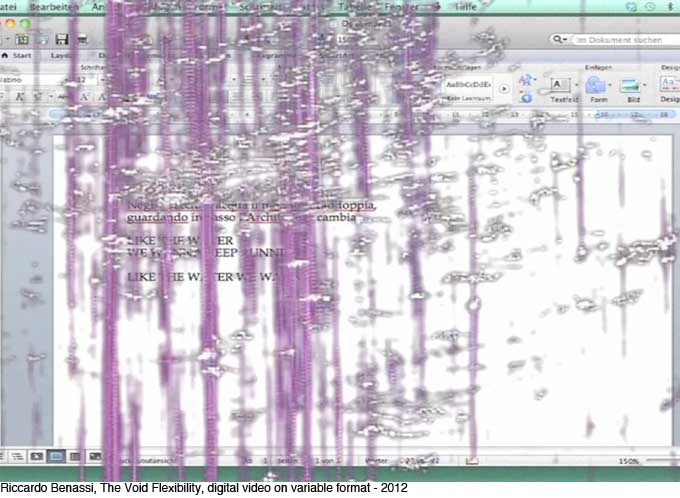 Alessandra Saviotti: Could you explain better how these meetings happen? And what do they lead to, for example?

Riccardo Benassi: For “meeting”, I mean the possibility that a work can – even for a moment – improve the life of the person who experiences it (after having improved the lives of the person/artist who created it). This improvement can lurk so much as a tear in a smile, and in all the shades in between.

Alessandra Saviotti:Lately you have committed yourself to many projects related to writing. And once again, I am amazed at how you have chosen a very thoughtful language. Today, no one stands for more than a few seconds in front of a work of art. How did you come to this choice?

Riccardo Benassi: I would say that when only the doer benefits from it, writing is reflective like any other media. A About the issue of time associated with it – you got the right point – I am writing to take time and give time. For example, it is said that time is money, but it is not true, time is worth much more. I happen to live important events, or fundamental moments, and I think that if they have been useful for me then they may possibly serve others, and so I speak about it. That said, however, I try to listen to my wishes and protect myself from the annihilation of daily life in the production of discourses.

Alessandra Saviotti: Silvia Bianchi has already interviewed you in 2008 mainly focusing on OLYVETTY, a project in collaboration with Claudio Rocchetti [i]. How has the project changed in these years?

Riccardo Benassi: To start with a cliché, I would say: after a reflecting pause, in which we have separated and dedicated ourselves to our research, now we set work on the evolution of the idea of OLYVETTY, and it is very exciting. Years ago, when we started, we thought that the only way to interact with a sound interface was breaking it live, destroying it on stage. There was a kind of dystopian nihilism in the idea that implied a great passion for machines and a refusal of the image of body obliteration as a function of the instrument. Today we noticed two things that have changed our perspective and have given us hope: on one hand, most of the body knowledge defies any attempt of formalization. On the other hand, we no longer need to cut anything in shreds and patches, because we ourselves are the ruins. OLYVETTY is in fact a test more than a method and, personally, I think that there is no worst ideology than consistency. 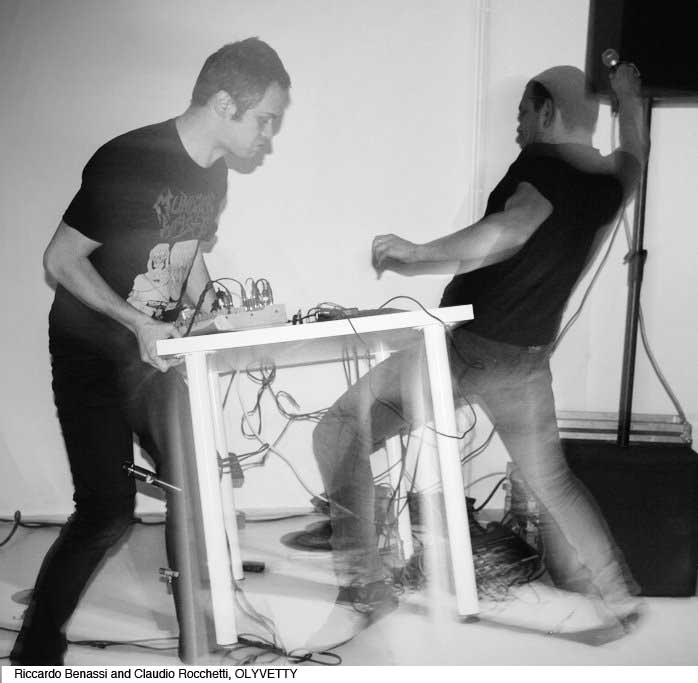 Alessandra Saviotti: What are you working on at the moment?

Riccardo Benassi: At the moment I am working on a new project which is going to be produced by the festival Gianni Peng/Live Arts Week by Xing in Bologna next year. I am also finishing an editorial project in collaboration with Alberto Salvadori published by Mousse Publishing: it will contain, together with two of my latest writings, texts by Gian Piero Frassinelli/Superstudio, Franco Berardi Bifo, Markus Miessen and a conversation I had with Liam Gillick. Another project, always editorial and close to publishing, is a new series of short texts called Doormats. I edit it together with Brandon LaBelle for his publishing house Errant Bodies Press, and the main topic is the request of presence offered by the present. If what I have just written doesn’t seem clear, or seems senseless, it’s just because you are a Windows or BlackBerry user.