With the total installation Seminarium, acclaimed Danish artist Jesper Just transforms Gammel Holtegaard into a tech-poetic hothouse for the bodies of plants and humans alike. Biology and technology fuse, virtually merging into a single organism living and breathing before our very eyes. In a series of brand-new works, Jesper Just brings his seductive filmic style and distinctive visual universe into dialogue with the Baroque grounds and gardens at the manor gallery.

Gammel Holtegaard proudly presents a new solo exhibition by Danish artist Jesper Just (b. 1974). Just is one of Denmark’s leading international art stars, famous for his ambitious, compelling film works with their hallmark perfected aesthetics. His film works are often shown in large, sculptural installations that involve the viewer as a participant. Similarly Seminarium reaches out into the exhibition space, making us witnesses to invisible, symbiotic interactions between plants, technology and the human body.

Seminarium is a total installation with six newly produced film works extending throughout the galleries at Gammel Holtegaard. The viewer is part of an intimate and sensual encounter with luminous, violet bodies and a floating woman, whose voice fills the exhibition like a commercial voice-over for a body-optimising product. ”Experience emotional wellness with clinically proven biofeedback technology,” the voice intones. ”Ready. Play. Feel…” 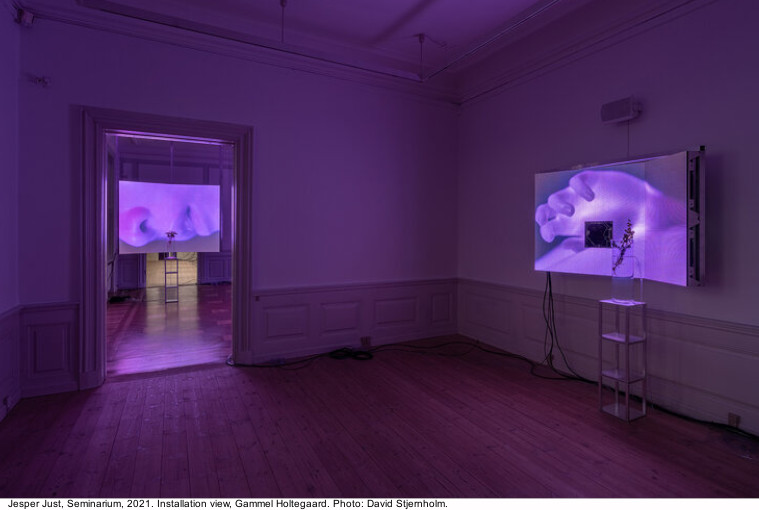 Seminarium addresses the perpetual human drive—past and present—to cultivate super-plants and super-bodies: to control nature and force it to assume specific shapes and properties.

The exhibition takes the history of the manor house as its starting point, a history that began in 1756, when royal architect Lauritz de Thurah designed and built Gammel Holtegaard. The Baroque gardens outside still stand as testimony to the human need to intervene in nature, forcing it to comply with a concept of universal symmetry.

Jesper Just’s total installation incorporates the ideas behind these cultivated surroundings in an elaborate, sculptural ecosystem of plants and video screens. A network of plastic tubing, cables and glass vases twist and turn through the galleries, creating a hydroponic cultivation system where plants grow in water and are fed by the light emitted by filmed bodies. From fragmented LED screens hacked to function as grow lights violet human bodies transmit precisely the right light waves the plants need to make photosynthesis possible. 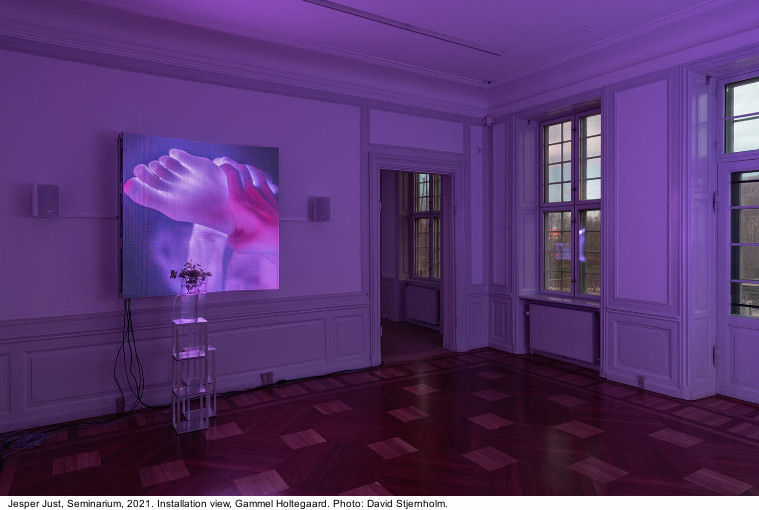 Film imagery, technology and organic processes form multiple mini-circuits within the installation. As the LED screens emit growth-enhancing light waves, the specific species of plant they feed can either be eaten or applied to the human body as a potential boost or cure in an exchange between plant forms and the human body.

Seminarium is the first time Jesper Just works with an Anthropocene perspective on nature. Using hard technology and soft poetry, the artist paints a science-fiction scenario in which nature, technology and the human meet in what the artist himself calls tech-poetics.