Negapedia: the battle behind the research.

Internet, that makes out of the collaborative utopia and sharing one of its highest purposes, shows also the exact counterpart: battles, challenges, polemics, contrasts. It is not the dark and mysterious deep web hosting this, nor a site built ad hoc to generate, incite, promote violence, but it is the web that we all know and frequent, the one with the cleanest face.

The great contrasts lurk in one of the projects, if not the project in absolute, more shared of the network: Wikipedia. Behind Wikipedia, there is a submerged world of battles, conflicts and continuous “knowledge” wars, of which the surface reveals only a few small ripples. These virtual battles are nothing but a reflection of today’s society, interests and positions.

In a nutshell, this is the general idea from which the project Negapedia Italia comes to life, the brother site of the previous American version, conceived and created by Massimo Marchiori, together with the students Enrico Bonetti Vieno and Matteo Botticchia. With this short article, we want to give a brief analysis and invite users to browse and browse into it. 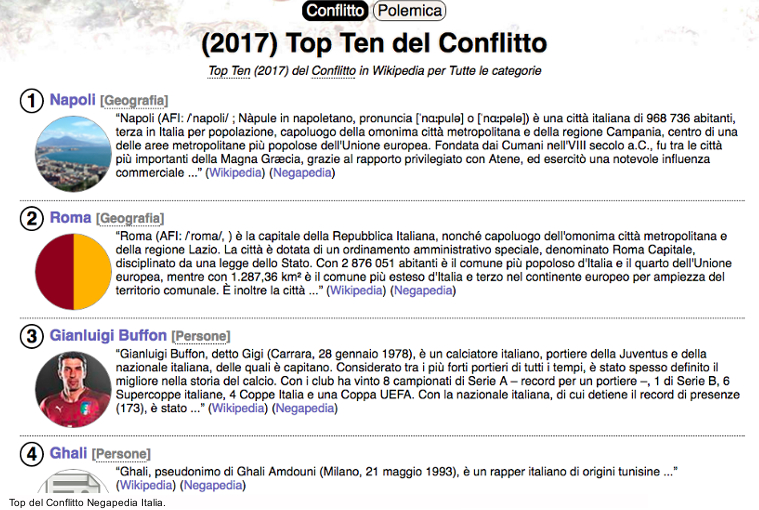 From collaboration to contrast.  Negapedia is a website that quantifies and measures the hidden contrasts behind every page of the most famous online encyclopedia in the world: Wikipedia. It is, as the subtitle says, its negative version, and, as such, it explores its hidden side, “where people struggle to shape information”. Marchiori, mathematician and computer scientist of the Department of Mathematics in the University of Padua, famous for having developed the algorithm used for Google, brings in his project an epic vision of today’s society where the clash, sublimated in the code of a website, is a daily routine.  This is a vision of the web and of the society underlying it, which unveils the conflict inherent in the human management of the public domain in order to banish on someone else to say its own exploiting the possibility of “making it public”. It is not a pessimistic view, but it is simply aimed at showing the two sides, white and black, like the tao, that stand out on the home page.

“Like every social interaction, the creation of articles in Wikipedia is subject to a balancing between “positive” and “negative” forces, where people add or delete information in reaction to different impulses. In fact, information is not just made of facts but also of needs, contrapositions, biases, interests. These aspects trigger epic battles in many parts of Wikipedia, battles that evolve over time and mirror our society, with its multitude of opinions and consequent clashes.”  Every word that is part of Wikipedia, every page to which users can contribute, becomes an open field, where to put, remove, add, correct often without the necessary skills, guided by an interested vision and stimulated by the free possibility to express it. Measuring these battles certainly highlights several interesting aspects of society, offering a cross-section without filters. 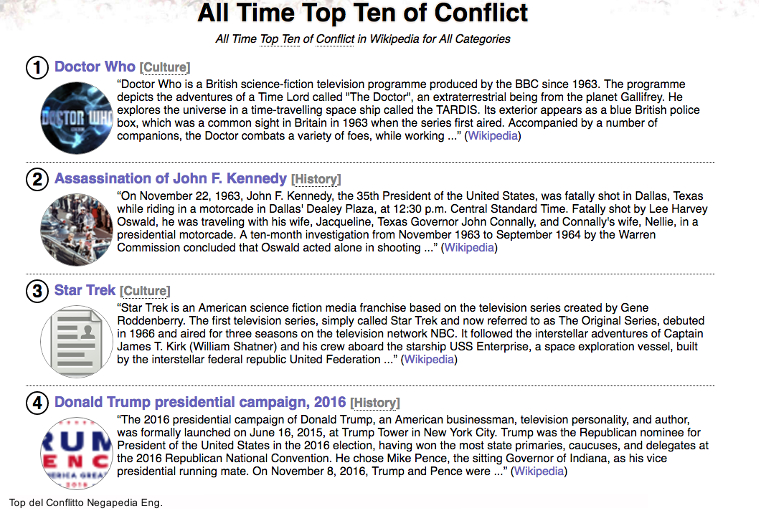 Negapedia structures its information through two fundamental parameters: conflict and controversy. As Massimo Marchiori explains: “The conflict reflects the “quantity” of battles, and is therefore symptomatic of how stable or not the content of a page is; the controversy, on the other hand, measures the attitude of the community behind every page, that is, its level of hostility “.  The conflict takes into account how many times a page has been brought back to the previous version, or a line has been deleted, giving a measure of the “informational battlefield”: a low degree of conflict indicates a stable page, a hight one an unstable page and a source of contrasts. The controversy instead measures the quality of this conflict, the level of bellicosity of users animating the page.

Marchiori continues: “Negapedia allows us to observe this mirror of our society at various levels, both by year and by categories of interest – culture, people, health, politics and so on – so as to give a complete overview on the drives that drive our society. The most relevant topics are easily observable through the top ten, and moreover every single page of Wikipedia can be seen in its negative version, showing its recent level of negativity, as well as the historical evolution, so as to grasp the changes that they succeeded with time in the drives that stir the world “.  Browsing in Negapedia means going to discover something more about today and the web, about society, its interests and priorities. For example, it is interesting to compare the top ten of the conflict in 2017 – i.e. the pages that have undergone more changes – of the Italian version – that has at the top places “Naples”, “Rome” and “Gianluigi Buffon”, followed by the “penalty”, “Juventus”, “Napoli Calcio” and “Ghali” –  and the American one, where above all stands “Donald Trump”, a sign of a greater sensitivity of the latter to the contingency of a specific historical event – if we want, this is how we can also interpret our third place of “Buffon”). 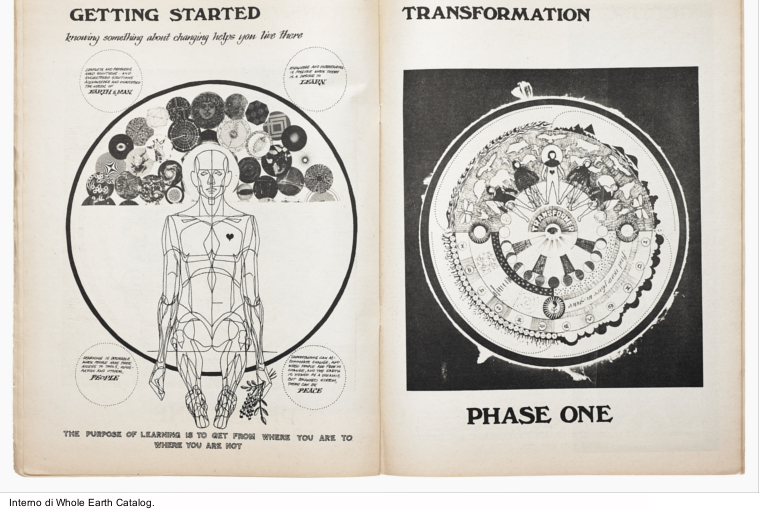 On the other hand, the top ten of the controversy is different: the “Vulcano”, “Kyoto Protocol” and “Troll”, indicating that the two meters can show decidedly different faces of society, quantitatively combative on generalist issues and instead focused qualitatively on scientific issues (“Vulcano”) or policies (“Kyoto”). Another interesting aspect is the Social Jump that shows how users connect their research without the rational guidance of an algorithm, through an “emotional”, random impulse.

“Access to tools” is a quote of Stewart Brand, the father of the Californian counterculture who in 1968 set up the “Whole Earth Catalog”, an editorial project that affected many young people of that generation. He was an inspiring guru for many people, hippies and not, who have animated today’s market.

The “Whole Earth Catalog” was a sort of huge catalog, for some (Steve Jobs) a sort of Google pocketbook, which aimed to provide all the knights of counterculture with the tools necessary to become independent from the society: “We are developing a world of intimate power: the power of the individual to educate himself and transform his environment” Brand said.

The story repeats itself: the “Do it by Yourself”, the aim to go against institutionalized systems and to provide the tools to do anything by yourself is a fascinating utopia that shines and will continue to shine, for the hippies that formed autonomous communities as for the citizens of the new millennium, writing all together their own history, culture, encyclopedia. 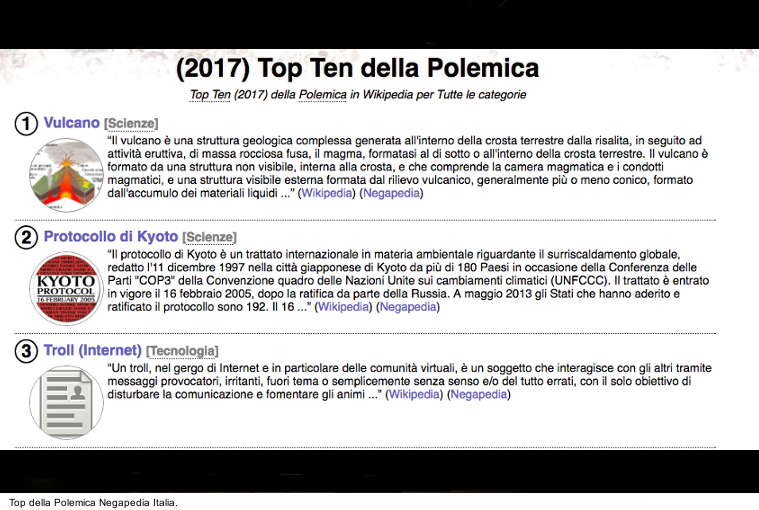 Many will turn up their noses, because at the end the “Whole Earth Catalog” was also the commercial gimmick of selling by mail thousands of accessories and tools, but black and white are parts of the history and of the desire of independence, so it’s nice today to have an instrument that can tell us about these two souls. However, seen from Negapedia, the page of Wikipedia is one of the most conflicting.