Do not get caught in the web – Interview with Geert Lovink

The web as a subject in continuous movement, difficult to “focus and shoot”. Nevertheless, it is a subject capturing all our attention, by its very nature and importance. It is a place with larger possibilities, where collective and singular intellects confront each other, where transactions are growing dramatically, changing nature and content.

A virtual place, totally real in some ways, provided that information, social relations, economy, but also politics, arts are living there, and – virtually now – any event of the human spirit, that needs to be reasoned, with in-depth, updated criticism.

Geert Lovink has been one of those that dedicated himself to this task with passion, facing the multi-facetted matter with an open and free spirit. The “antagonist” nature of many of his views, brought him to obtain a central role in criticism and debate on social media, as well as to provide the basis of cultures and practices alternative to the dominant ones. 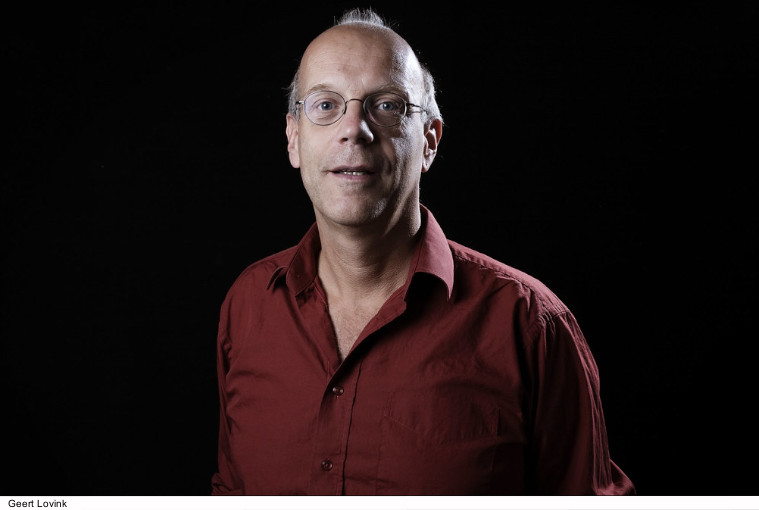 He developed his academic career between Nederland, where he was born, Switzerland and Australia. The most recent developments of his work saw him investigating issues such as the various “cultures” in internet, the social media “architectures”, the cryptocurrencies, the psychological effects of our lives between social media and digital tools, and central issues in this field such as artificial intelligence, the contradictory nature of the web (between centralized platforms and the decentralization inherent in networks), the constraints and inflexibilities inborn in the dominant models, to unveil some of the hidden mechanisms that bind us to a “new world order”, where inequalities are increasing, as well as isolation and social fragmentation.

Geert Lovink is founder and director of  “INC – Institute of Network Cultures”, in Amsterdam, investigating the nature and the developments of the cultures in the web with meetings, publications and, obviously, online dialogues, proposing furthermore alternative and critical scenarios to digital culture, active in design, research, and philosophical speculation. 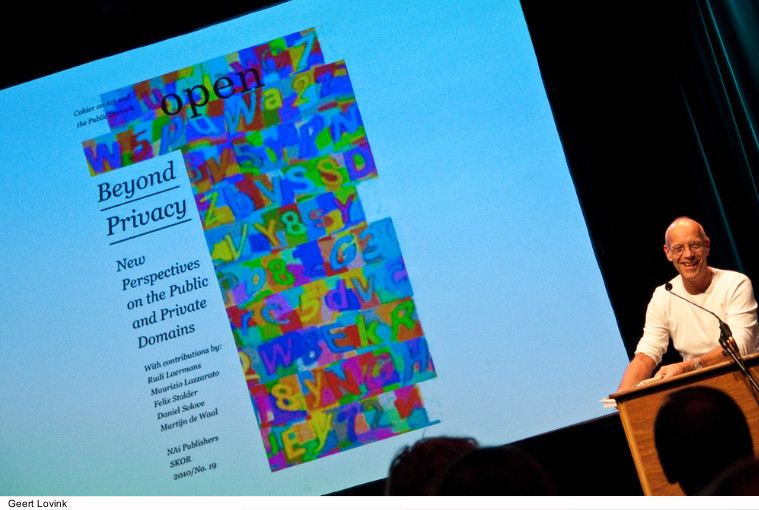 Marco Aruga: You underlined the difficulty of criticizing the digital society because the present is always changing. Are you defining a strategy to intellectually focus these difficult times?

Geert Lovink: The strategy happens only within a certain paradigm. This is a problem. We cannot say that a strategy will develop for ten, or twenty years, or something like that. I think that, if it would work, we would understand very well the “zeitgeist”, the contemporary moment.

I defined this as the post-Brexit/Trump/Cambridge Analytica moment. We are living in the “post-2016” world, defined by geopolitics, that is different from what it was even five or ten years ago. Within that framework, we can develop strategies, and possibly also a critic. Now, it can also be that things will change very fast: this is a problem, and we, unfortunately, will have to rethink it.

We can also say that we built very “long term” alternatives. That’s good, and they will probably last much longer: ten, twenty or thirty years, but they are necessarily much “smaller” or, if You like, also more “underground”, or “avant-garde” or conceptual, much in the same way I was influenced from conceptual art of the ‘70s and ‘80s. These are my reference points when it comes to “long term” thinking, but this thought is not always something you can apply to the short terms changes that are happening.

Marco Aruga: You agree about the fact that the internet is a mess. It is a mine for big companies to get and to use data. But we – common people – how can we educate ourselves to orientate better and to use better the web?

Geert Lovink: In the past, we felt really “trapped”, like: “there is no alternative”, “how can I communicate with my friends and family… I can only do that through Facebook”… This is still valid.

Funny enough, even the most radical artists, designers, and activists are precisely the ones that rely most on Facebook. There is irony in this, there’s a very strange situation happening there. You see that, for instance, among young people it is much more fluid, they are already really open to using also different things. For young people, there’s already a multitude of platforms and alternatives that are available, that vary from free software to search engines.

The only thing we can say is: yes, for bigger platforms there’s no alternative, and this a problem we need to take care of. 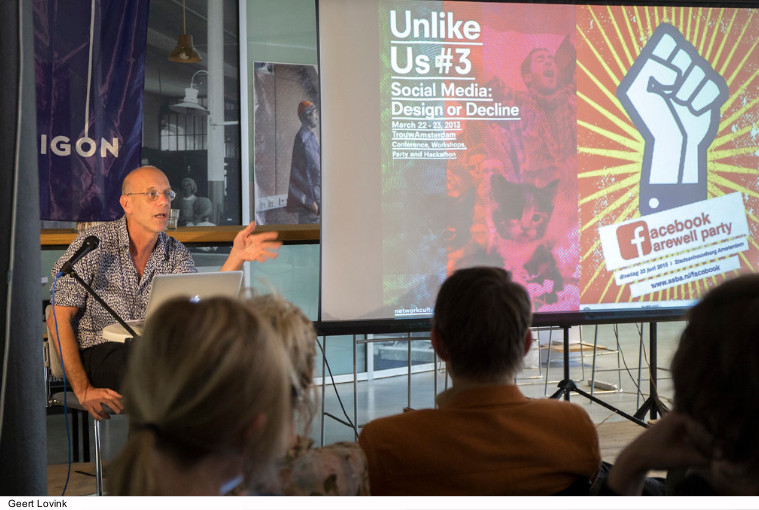 Marco Aruga: When we face big changes, a lot of fears come out. In front of digitalization and huge technological innovation, are there fears that can be considered justified?

We can discuss the “fake news”, and this is a very new, interesting approach because the “fake news” is challenging us. There are two possibilities. Either we say: “no, we are already living in the post-truth world, of the multiple points of view”… It is a post-modern perspective, like “there’s not only one truth”… But the same people, the same activists, and the same investigative journalists still want to “unveil” the “fake news”. Sometimes the same persons “embody” these positions, even in one sentence, or activity, which is very interesting.

We see this ambivalence we have, embodied deep inside us, and we need to further explore this, without just saying “ok, the “fake news” will be “filtered””. There is not a simple technological solution for this.

Marco Aruga: Big changes means also big opportunities. Which ones can you see in particular in the creative fields, for the artists?

Geert Lovink: Five or six years ago we discovered that, when it comes to art and artistic practice, we were living in the post-digital era, or even post-internet. This has been going on for some time, and — in a way — artists have developed a very rich hybrid language, to show that digital was part of their work, that they were using also physical elements, exhibitions, and so on … . Almost a “gesamtkunstwerk” approach, trying to bring together the immaterial and the material, the real and the virtual, the digital and the post-digital. We built an “arsenal” of possibilities to play with. 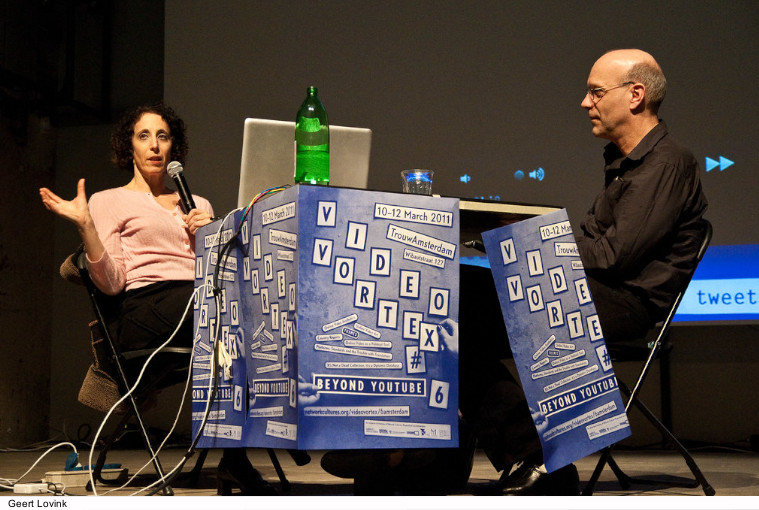 This has been five to ten years ago. Where are we now, coming to post-digital condition? That’s the real question. Unfortunately, when we look at the big festivals (like the Biennale, etc. etc.) we do not really find an answer there. One of the problems is that the “institutional” world, funny enough, is very much behind. The institutional world is catching up with this new reality, and in this context, we don‘t find real avantgarde. We know that many artists have phenomenal digital skills, but what are they doing? They cannot really fully explore their possibilities, because the world around them is not allowing that to happen.

Marco Aruga: New tools should give also new ways of expression. But we see a huge amount of resources spent in limiting freedom of expression, and freedom itself. How do you see these problems? How technology itself, and digitalization, could help in solving them?

There are many experiences you can have, even for young people. These are very “foundational” experiences. They really identify themselves deeply with that cyber-culture, in the same way in which we identified ourselves with the emerging cultures at the time, twenty-five years ago.

That “moment” is still there, but this not shared widely in society. What we see is a kind of a new “divide”, a new “digital divide”. The freedom is the most crucial thing here: the freedom you will express and you will experience is a kind of hidden, in a small group of people playing the game, or whatever, but it is not something that is shared in a broader community or society at large. 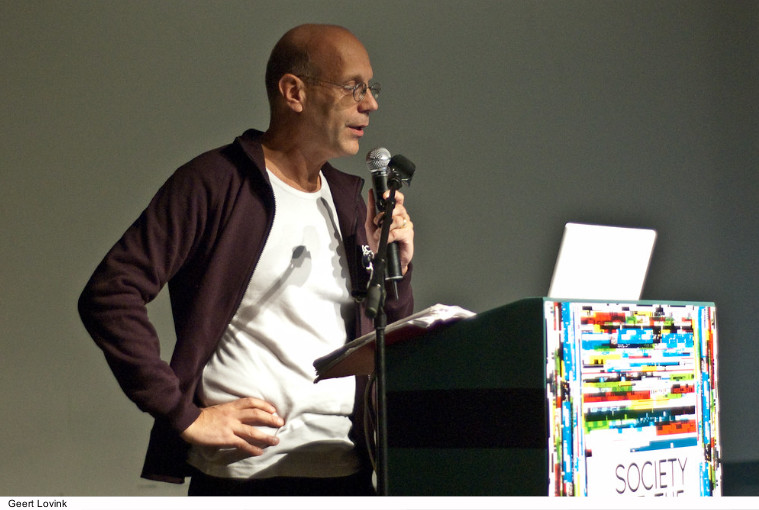 Marco Aruga: Since 2010 you’re not a Facebook citizen anymore. How did the “Facebook state” change, since then? And how the big power of huge tech companies is affecting and determining the world policies now?

Geert Lovink: As many people know, I left Facebook in 2010, in the first big campaign, with 50.000 other people at the time. Now almost a decade is gone. This was in protest against the privacy violations at the time. This has always been known for a long time, and the evidence is just staggering, when you find out what has happened, the number of scandals. Even on a daily basis, I try to keep up, but it is very very difficult. You can spend your whole life just reading up on the Facebook scandals so long, they are massive. The data breaches, also the systematic approach, the technological foundations.

What Facebook has done, of course, is that it has diversified a lot: it still tries to move away. Facebook is now a “hydra monster” with many faces, at least thinking about Facebook/Instagram/Whatsapp. We all know that the big debate now is about the integration of the three into one, where especially the identity question is very pertinent, should this all come together. This is of course also related to the “Lybra” question, it is not only an integration of these “identities” into one, but it is also a question of creating this economic-financial structure so that we can freely move around these platforms, but still using the same currency and payment system. This is the long term approach of the Facebook corporation.