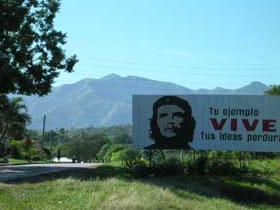 Buey Arriba is a rural community placed down a hill. There’s only a coach passing it by daily, main street crosses the village and coasts fields, every Sunday a small fair takes place some kilometres away from the village, near the banks of a little river. The village is on the Bayamo province, capital of the Granma state, one of the eastern regions of Cuba, at the core of Sierra Maestra, where Castro, Guevara and Cienfuegos planned their guerrilla actions against the dictatorship of Fulgencio Batista in 1957-59, which is now a huge tropical mountain park crossing the states of Guantanamo, Santiago and Granma.

Beyond expectations this tiny village is a centre of multi-media production, a training and social aggregation space. Top hill are the headquarters of Serrana Television, an independent network, which has been producing low-cost movies and documentaries for ten years to support (and with the support) of the local mountain and campesino communities.

On the hill I met the chief executive Isael Martinez and the video-maker Kenya Rodriguez on a platform suspended vertically over a river whose valley fades away in the distance among the mountains. This platform is the only alteration the “Serrana Television Collective”  as editors call themselves  made to the pre-existent building of the Forest Rangers. From 1993 on this structure has become the TV station studio: they use it for brainstorming, discussions, collective reflections and spare time.

The TV station history is simple: approximately ten years ago, in 1993, Daniel Diez Castrillo a TV producer coming from ICRT (The Cuban national broadcasting channel) decided to leave Havana and go East. It was during the Periodo Especial , the very tough economic crisis that followed the fall of the Soviet Union: as Van Van sang, those were years of starving and existential diseases caused by the extreme poverty  mainly at Havana: “Nadie quiere a nadie/ y se acabo el querer” (“love ends when nobody loves nobody” love ends in the community and cooperation sense is replaced by individualist misery). Diez chose to go East to experiment with the communities in Sierra Maestra: he wanted to make a collective form of cinema, to produce movies and documentaries narrating the history and identity of people living that area, to create a form of partaken communication far from the capital.

The TV station was originally supported by UNESCO, which provided some funding and technical support. Now it is officially involved in the national educational television but off-the-record it produces and self-supports itself without governmental interferences on its contents.

A little production studio is the office for 40 persons who were trained to be filmmakers and producers participating at documentary projects concerning the local communities: peasants who have got to trek for 30 kilometres a day of hiking trails to go to school or to go working outside Sierra Maestra park. Children going to school, mountain villages, the ever-present revolution history mainly in the East  as a post-card to be proud of or a common history to be aware of in a critical way, far from both the “capitalist” decadence of Havana and the narration of Cuban reality coming from the outside.

Community people learned to live with Serrana Television cameras  in front of and behind  which narrated in an almost sociological way anecdotes, habits and dreads of this area, which is far from everything but at the same time it is connected in a communicative network that changes this community into a part of a whole.

During the first years  explains Martinez  we produced videos through analogical camera; the members of the project transferred and edited videos to VHS. Then they move a television and a VHS player to the community house of the small Serrano village (the only building that had electric lights two hours a day and thus the centre of social relationships of the entire community) and then they show videos to children and campesinos , who identified themselves with the stories of their neighbourhoods lost in the tropical forest.

The process of the collective/producer of the TV station to gain the consent and its working base support is to focus on the active involvement of communities inhabitants in the production. Residents  and even the ones who live in far away geographical areas  have become editors, operators, directors of photography and filmmakers.

One of the main Serrana Television project is actually to train children on the use of audio-video technologies in a communicative way: this project is aimed at teaching children from local schools their every day life is very similar to the reality of children living, for instance, in Guatemala . Through the use of the Internet and a web cam children meet their coetaneous in Guatemala agricultural realities. Or they meet the realities of other countries by means of collective vision of the documentaries the Serrano collective films when invited  for example  to Cuban medical international missions in different countries of Latin America.