Notes on Realtime Tahrir. The Revolution Will Not Be Twitted 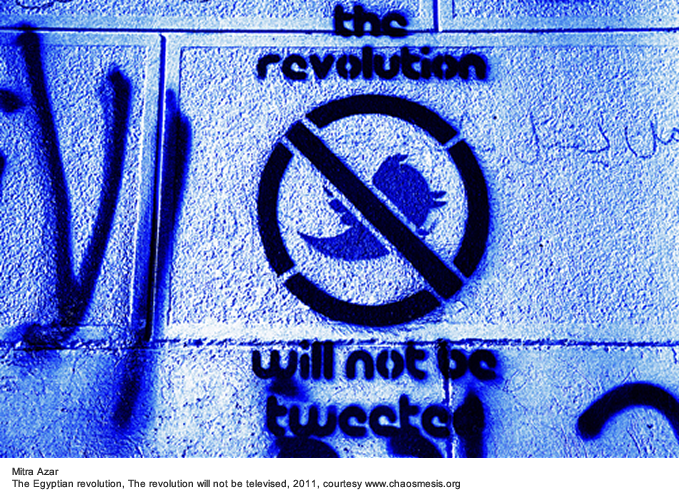 The light in Cairo has a grainy and layered quality to it, just like the mercilessly unswerving beige and grey nuances of its decaying buildings, along each side of its wide streets, between bridges, underpasses, railroads. Rays of sunshine, penetrating the thin vapor skin, bounce off the rusty air conditioners, spotting the stochastic and unrelentless turmoil of the vapors on the Square, intensifying the amber nuance of the afternoon light.

I walk up to Tahrir Square, trying to avoid the huge puddles purposely created by the young safety staff on the Maspiro side, in order to appease possible interventions by the police with CR and CF tear gases, that cause gagging, and attack the nervous system, thus generating temporary paralysis and/or tremors. Only a few weeks have gone by, since the counting of the last martyrs. 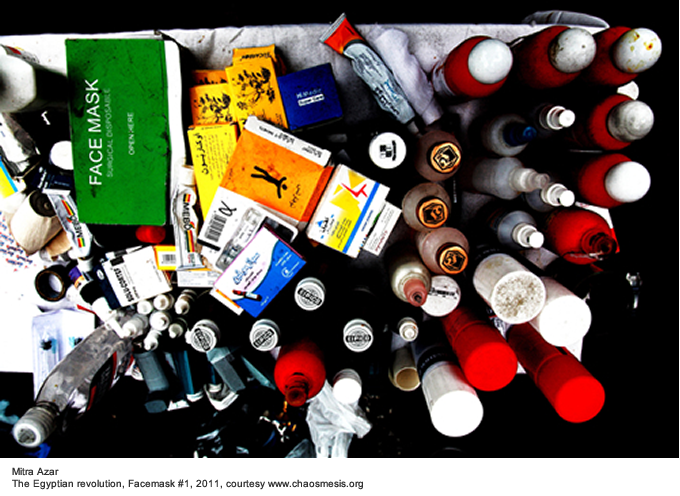 After two smiling youngsters perform a superficial control of my passport and backpack, another two raise the ropes enclosing the entrance, and they let me in, apologizing.

Tahrir Square is alive, organic; it smells, sweats, pushes, cries, shouts. On its sides, the roller shutters of closed shops are swallowed by boards and graffiti. Makeshift huts and ropes delimit spaces for the artists creating slogans and images, as well as for the first of the first-aid area I find here, where volunteers receive patients, while trying to reorganize a huge amount of medicines. I hear that little gangs from time to time enter the Square, trying to steal medical equipment and products; the Raìs sends them, people say.

Pylons make supports for temporary, improvised architectures, needed to organize life on the Square. At the same time, they are the main source of electricity, abstracted through surfacing cables of unscrewed metal, and connected to extension leads powering big tents, once the night falls. A balding man – a cigarette in his mouth, a cheap plastic USB antenna in his hand, and a battered laptop on his legs – explains to me that the companies around the Square have created access points for the rebels. Then, he shows me his Twitter account on his cell phone. 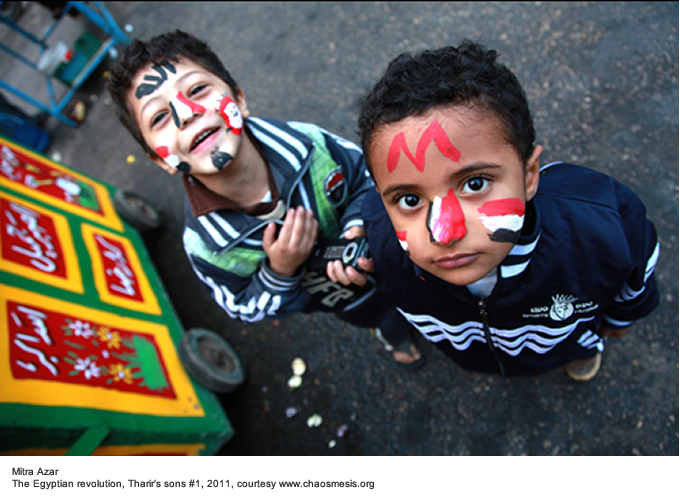 Between the sidewalk and the center of the Square, rickety iron carts serve ful – a metal bowl of warm beans with lemon, cumin, salt, pepper and chilly, salad and pickled vegetables on the side, on filthy planks of unfinished wood, for half a dollar.

More compact carts offer sweet potatoes from Alexandria, coming out of dented and steamy cylinders where wood and ember burn, exhausting from a cardboard tube, while others fill hard plastic dishes with couscous and sugar, behind steamy windows. Tripods and bricks are instead for salted tomatoes, protected with cellophane bags, on which the Muslim Brothers have glued their balancing icon – the scales of justice and freedom.

In the middle of the square – between the sidewalks and the real center where one of the many tent cities, made out of fabric, cardboard, plastic, ropes and carpets, rises up, sheltering the rebels from the chill of the night, groups of people squeeze each other in order to exchange ideas on the current political situation, pushing and shouting, kissing each other, in an endless stream of voices alternating and overlapping, without any fixed dialectic rule, and with an exhausting strength and violence and beauty. Everyone included: old people, men, women, children.

Some say the revolution will stay on the Square without going to vote, some believe that elections are a step forward, someone else shouts that SCAF (the Supreme Council of the Armed Forces, currently controlling the country) must go away. Some say sellers must leave the Square, they are selling drugs, and this is not a market. An old man says that the front lines of protest stuff themselves with drugs, triggering a reaction in the young people next to them. 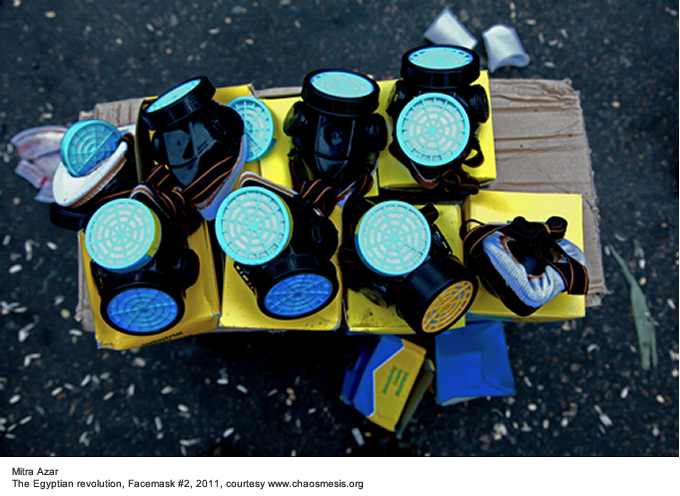 Not far from there, in front of the Omar Makram statue – mostly covered with posters and tagged with stencils, graffiti and stickers – a child in a tracksuit, blacker than the blackest coal, is sleeping crouched on a metal grid. While preparing my camera for shooting I am immediately surrounded. A long-bearded man asks to see my passport. He says that it is not possible to take pictures on the square.

These episodes will be occurring again, day after day, every time causing endless discussions regarding my legitimacy to take photos or shoot videos. Even when a kid carrying the Egyptian flag asks me to be photographed, someone stops me saying: “Why are you photographing him? He is not the revolution, he is here just for fun.” They say they are afraid that I’ll portray the negative side of the Square. They insist that the poor do not represent the Square. 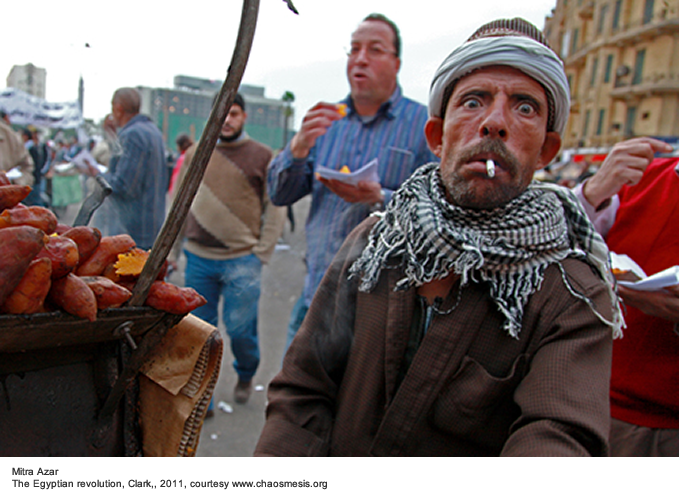 I begin to think about how important it is that the Square keeps staying a crossing place, not only as a space of steady and ongoing occupation, open to those who haven’t been here since the beginning, but who became interested a bit later. Open to those who paint their faces with the colours of the Egyptian flag, even if they would have done the same when Mubarak was leading the country. Open to the poor who are hungry and have no place to go; to motorcycles with a TV set, instead of a rear view mirror, ridden by a woman wearing a burka, a man and three children wearing sunglasses.

Open to Vespas with a subwoofer instead of the document compartment; open to cripples, to those with no teeth, to the deaf-mutes who can’t hear, but nevertheless jump into the fray of the discussion to imagine it – the revolution –, to see it in the relentlessly opening and closing of the mouths. Open to barefoot children running all over the place or sleeping under thick layers of blankets full of fleas.

This Tahrir is not what I read about on Twitter. 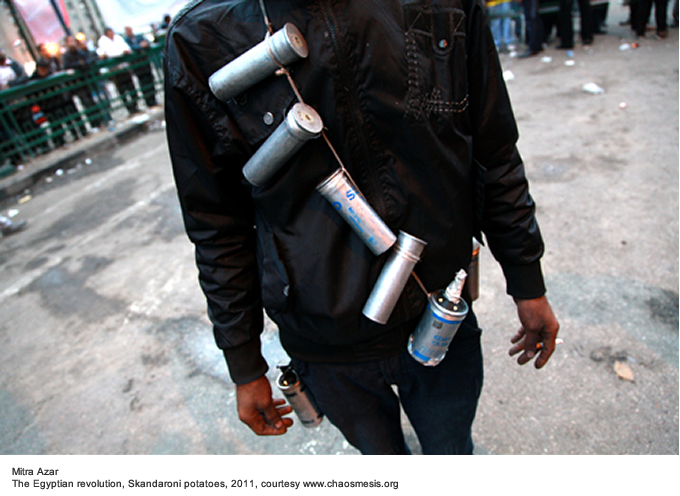 As it seems, some Western journalists used the pictures of Tahrir Square in a way that rebels did not appreciate. Or, maybe, that’s what state TV said, in order to turn rebels away from Western reporters, telling that on the Square there were more Europeans than Egyptians. The fact is that now it is difficult to take pictures in the square, especially of the poorest fringes of the occupants – the majority of the current Tahrir fauna – as well as of street vendors, old people around a fire.

I try to explain that fire is a powerful symbol for aggregation, in the same way that old people are a symbol for memory. Nothing to do. I feel like we are looking at different images. Censorship doesn’t seem to be linked merely to security reasons – that is, it is not to protect someone’s identity – but rather the result of the acquired awareness of the danger that images represent, for Tahrir occupants.

Images are weapons, and they actually are the only weapons available to the rebels. I feel like I have already witnessed such awareness – which is naïve and profound at the same time – even in the days of the Iranian Green Revolution, and more methodically among the cyber activists of the ongoing Syrian revolution. I think that this new perspective about images – digital, iconic, as simulacra – is the consequence of their increasingly political significance in the era of real-time politics. 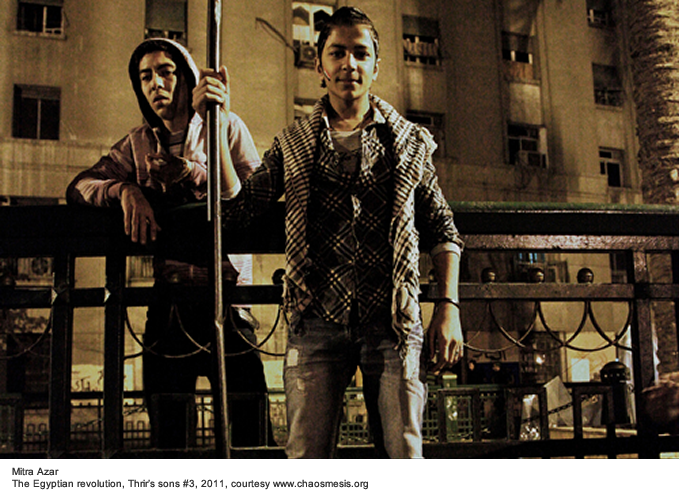 I find the existence of a visual censorship in the square rather annoying. On the other hand, the enforcement of this rule in an anarchical and never definitive way – anyone can accord or deny such right – opens up to unexpected positions. As a result, I am, from time to time, allowed to take pictures, after grueling negotiations with the bystanders.

Why can’t we take pictures of the miserables of this revolution, since they are one of the reasons for it and at the moment somehow the majority of the occupants of Tahrir square? When I move from Tahrir towards the occupation standing in front of the Prime Minister’s office, I find a completely different situation. People tell me that right here I can find the Tahrir of January 25, the one that triggered the revolution: guitars, drums, students, Twitter and FB generations. I’m puzzled because I have the impression that the world of students and intellectuals is distancing itself from that of the poor, placing itself physically in two different areas. 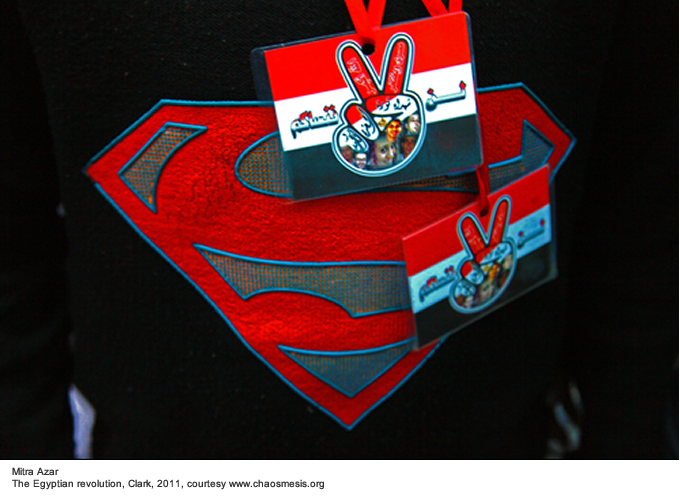 I take a look around: the walls surrounding the building are completely covered in tags, stencils, graffiti, even in the most stereotyped Western revolutionary rhetoric, such as “One solution… revolution”, “a.c.a.b.” (all cops are bastards). But one of them particularly strikes me: Twitter’s blue bird behind a backslashed circle as in a no symbol: “The revolution will not be twitted.”

Almost an appeal for a physical presence on the field, a statement of distrust and powerlessness towards one of the most popular tools of the so-called Arab Spring. 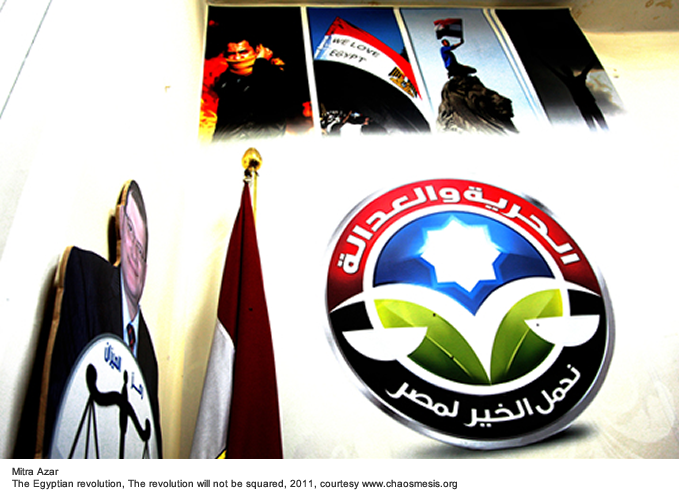 Yet, the feeling of Tahrir as an organic, physical-symbolical entity, almost independent from the individuals that form it, is what remains beyond scepticism, fears, inner tensions. The Square is indefinable: depending on whether it is day or night, it is filled with completely different people, from Muslim brothers to Christians, to the poor, students, intellectuals, workers, expatriates. Basically anyone can join in and take part in it, anyone can have their say, if the naïve or reductive interpretations of some of these dynamics – inevitably characterizing mass events such as this – can be transcended.

If, instead of focusing on girls occasionally being harassed, we would look at the stream of people immediately intervening to let them walk away. If, instead of focusing on the mercilessness of certain violent incidents (as in the case of a pickpocket caught stealing, and beaten to a pulp by an angry mob), we would look at people exhausted by the endless attacks of the police or the night gangs stirred up by the regime to create chaos and unrest.

On Mohammed Mahmoud Street, people still talk about the ‘eye snipers’: even the army leaves no way out to vision, thus, not being able to aim at cell phones’ cameras, they shoot straight in the eye. In the meantime, the surviving eyes of the crowd fix the wall of concrete blocks stacked one up the other, separating the protesters from the troops protecting the Ministry of Internal Affairs.

The day after, I read on Twitter that in front of some of the polling places, party officers are distributing sandwiches and Pepsi. At night, a Dick Tracy-look-alike magician, at the entrance of the Square, is entertaining a bunch of fat guys with ping pong balls which he spits out of his mouth and then extract out of the eyes and noses of his audience, and which frequently drop to the ground, slipping through the crowd, hitting dented cars sporting an arabesque, instead of the steering wheel. 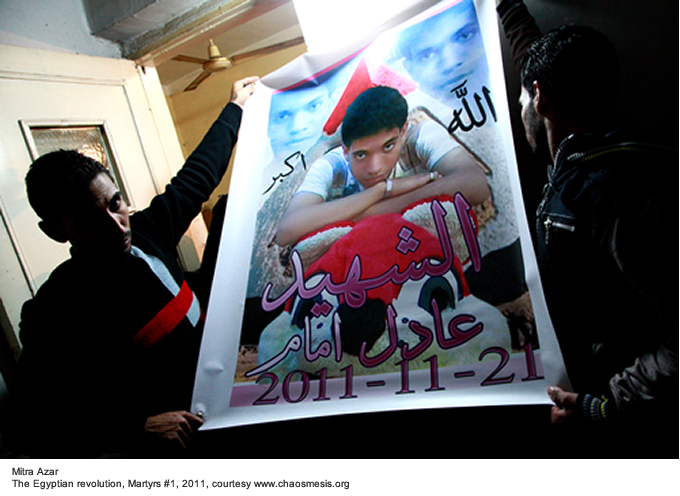 The Muslim brotherhood is going to win, everybody knows it. In the meantime, The Sad Panda makes a balloon shaped like a Sad Panda to drag along among the kids and their pink cotton candy. At night, at the end of election day, there is talk of the kidnapping of an activist. As the news of his release is being twitted, his followers, puzzled, wonder why he is not twitting yet…

Here are some virtual hint on the Egyptian revolution: 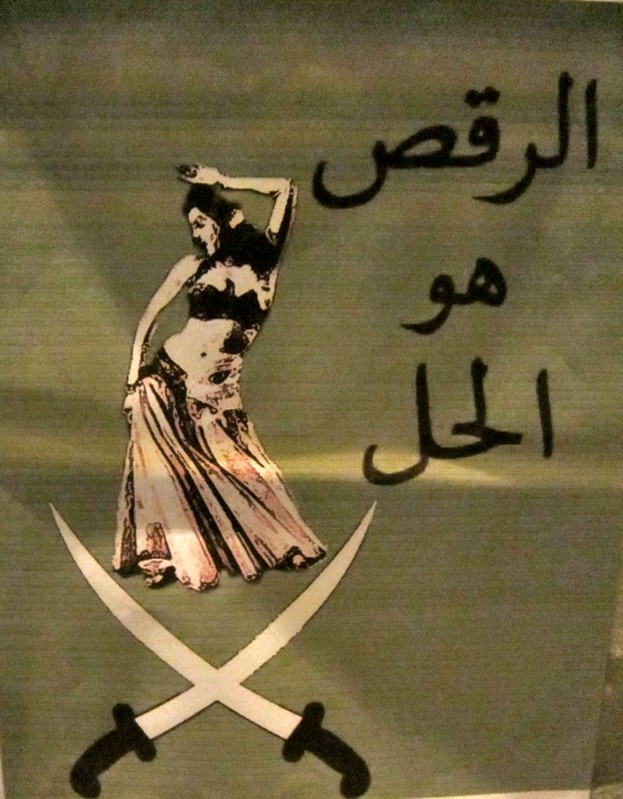