Once Is Not Enough 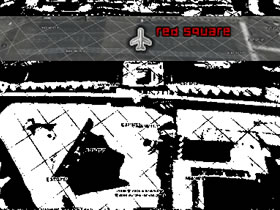 In 2007, Eva and Franco Mattes (aka 0100101110101101.ORG) created Sinthetic Performances, a series of “live” actions, which were led in Second Life with their avatars, making use of some classical and historical performances of contemporary art.

To be precise, they performed again Chris Burden’s “Shoot” (1971), in which the US-artist had wanted to be shot in an arm in a public space in California; “Seedbed” (1972), in which Vito Acconci masturbated in the space below a staircase of an art gallery in New York; “Imponderabilia” (1975), a Bolognese event where the visitors of an exhibition had to enter through a very narrow space, which was almost completely obstructed by Marina Abramovic and Ulay’s naked bodies; “Tapp und Tastkino”, performed many times between 1968 and 1971 by Valie Export and Peter Weibel, in which the visitor could touch the artist’s breasts, who was hidden by a box that was shaped like a sort of closed theatre; finally, the famous “7000 oaks”, with which, during the “Documenta 7” exhibition in Kassel in 1982, Joseph Beuys encouraged the public to plant 7000 oaks to create a wood that could remain, in time, a symbol of this exhibition and of the social potentialities of art.

I have already mentioned the “re-enactment”, that is, the repetition, the restaging or the recreation of artistic performances or historical events of a more or less recent past, in the article with the title “Chi ha paura di Janez Jana” in the March issue 32 of “Digimag”, apropos of the action ” Mount Triglav on Mount Triglav ” of the Slovenian artists. If it is worth talking more in detail about this topic, it is not only because these three artists, who today are called Janez Jana, are organising the exhibition “RE: akt! Reconstruction, re-enactment, re-reporting, overseen by Domenico Quaranta, which is opening at the National Museum of Contemporary Art in Bucharest in January 2009 and which is then moving to Ljubljana and to Rijeka (Croatia). The fact is that, if we examine things with a bit of perspective, we will realize that the re-enactment is a widespread phenomenon and that it is able to make us discover some interesting things concerning contemporary art and its interaction with digital culture.

Therefore, let’s begin with a little history. Yes, because Eva and Franco Mattes or Janez Jana did not start from scratch: their merit is to have made use again of some practices that were already operating and, through the use of synthetic environments such as Second Life but not only, to have started a deeper reflection on these practices. The idea of performing ancient historical events again is not new: in Italy, the Palio, the “Carroccio” ( medieval ceremonial cart bearing the city standard) in Legnano (Northern Italy) and many other similar costume parades; in Great Britain and in the USA, the so-called “pageants”, faithful and sometimes meticulously manic representations of the battles of their respective civil wars in the seventeenth and eighteenth century, are only the first examples that come to mind. However, at the origins of the documentary film, already with Robert J. Flaherty, we can see how the director put, together with shooting from life, some simulated reconstructions of the events he wanted to document (e.g. the hunting or fishing of the Inuit in “Nannok of the North”).

In this field, a real turning point was marked by Peter Watkins, a brilliant and too often forgotten English director, a supporter of a programmatic contamination between history and fiction. From the Sixties onwards, Watkins has always made reconstructions of ancient historical events (“Culloden”, 1964; the monumental ” La Commune-Paris “, 1871, 2000), based on action scenes but also on interventions of the actors who, with intentional anachronism, commented on the events as if they were speaking nowadays; whereas, in films like “The War Game” (1965), “The Gladiators” (1969), or “Punishment Park” (1970), he created strange hypothetical situations, some fiction films that were presented as if they were documentaries. Everything with remarks that lucidly and pitilessly aimed at finding the shameful and hypocritical manipulations of the political and economic powers.

Since the end of the Nineties, people have started to practise the re-enactment also in the field of visual arts. In 1999, French Pierre Huyghe created the two-channel video-installation “The Third Memory”. It is the re-enactment of the famous robbery at Chase Manhattan Bank in Brooklyn on 22 nd August 1972, from which Sidney Lumet, three years later, drew inspiration also for his classic film “Dog Day Afternoon”, where the protagonist was Al Pacino. Huyghe used old John Woytowiczs, the perpetrator of the robbery (organised to finance his friend’s operation to change sex), now grown fat and lazy after several years in prison, but completely at ease (so it seems) in his role as the “director” of the re-enactment of the events, of the positions and of the dynamics of that afternoon, which was supposed to have much influence on his following life. The comparison between this re-enactment (on a screen) and the original shooting of the robbery mixed with scenes from Lumet’s film (on the other screen) does not aim at restoring a presumed “truth”, but at showing how much our perception of the facts has been influenced by fiction and the media.

Woytowiczs, in the film of 1999, cannot do nothing but imitate, although he plays a so “personal” event, Al Pacino, and not as the protagonist in “Dog Day Afternoon”, but as the Godfather, a role that is much more suitable for his physical aspect and for his part in the fiction of 1999.

However, the artist that, more than any other person, has explored possibilities and limits of the re-enactment in this new decade of the century, is maybe English Rod Dickinson. His manic precision of going back to the scene of the events by which he was struck and impressed is excellent. But this does not mean that Dickinson is itching for philology, on the contrary: what characterises his work is his ability to extract the elements of a certain event that are more pertinent in relation to the new reading that can be made even after a few decades.

Somehow, his works seem to achieve what Benjamin said, already in the Thirties of last century, apropos of the “dialectic” feature of some images, in which what matters is not the time of their production, but the time of their “new reading”, that is, the time during which they gain what the thinker from Berlin called “now time” (Jetztzeit): the ability to concentrate in themselves all the meaning of an age. So Dickinson “repeated” one of the most shocking experiments of social psychology, the famous “Milgram experiment” of 1960 (The Milgram Re-enactment, 2002), in which the American psychologist from Yale revealed how a lot of people have so deeply introjected the principle of authority that are ready to inflict electric discharges to other human beings, if they are asked this by “authority” figures during an academic experiment.

Two years later, Dickinson made people live again, at the ICA in London, the massacre of the Davidian cult of David Koresh by the FBI in Waco, Texas, in 1993 (“Nocturn: The Waco Re-enactment, 2004): in his “reconstruction”, in a stadium, the tragedy is divided into its elements (the reciprocal position of the spectators that “play” the victims and the attackers, the deafening and piercing soundtrack in which the FBI intended to overcome the Davidians’ resistance), even to point out, as in the previous “The Milgram Re-enactment”, a person-society conflict that is apparently fundamental for the artist. However, exactly this analytic ability brings Dickinson , on other occasions, to present some re-enactments of events that have never happened, which are created with so much accuracy that they hide, or make very difficult to discover, their falsity.

There is, then, “The Air Loom”, presented at the Piet Zwart Institute in Rotterdam in 2005, a refined reproduction of a machine that is able to control the Londoners’ (and above all the Prime Minister’s) minds, in 1810; or the “Greenwich Degree Zero” installation, planned with novelist Tom MacCarthy and created in 2006, in which the very detailed reconstruction of a failed anarchic attack against the Observatory in London in 1894 serves to start again a reflection on the role of the media and of technology in the construction of experience and of public memory.

Even from a so short and incomplete review, it is clear that the phenomenon of the re-enactment is linked to the issue of “technical reproducibility” of the work of art (or, if you prefer, to its media feature), and to the reflections that have been opened on this topic from the essay “The Work of Art in the Age of its Technical Reproducibility” (1936) by Walter Benjamin. It is one of the last consequences of the issue of “open work”, of the depreciation of an “original”, of the relational feature of the artistic event and of the awareness of the social and ethical responsibility of each artistic action. However, the re-enactment is not so much the expression of a neo-avant-garde experimentalism, like many “open works” from the Sixties and the Seventies of last century; it is the expression of a crisis of the history and of the tension of the common citizen that wants to be part of it in a more complete way.

As the German scholar from Berlin , Jennifer Allen, says, in the re-enactment the public becomes a witness, for whom “the original event becomes historical and takes on a temporal dimension and asserts its statute of history appearing as a fair event, with a finite length. In other words, it is the re-enactment that makes the event an origin, giving it a definition and an identity that maybe it did not have”. In this aspiration of the re-enactment to turn a chaotic past, a shapeless coherence, into a fair and definite experience, which only with repetition and a new reading gains a possible sense, history does not have a normative and closed feature: on the contrary, it appears, as it was already for Benjamin, as a field of possibilities, in which not only the future, but also the past is constantly rewritten.

However, the re-enactment (and here it has a pertinence and an affinity with digital culture, also when it does not explicitly use digital means) shows also a strongly linguistic, or better, meta-linguistic feature. In translating historical, cultural, artistic events from a context to another, from a medium to another (re-enactments are almost always also “re-mediations” as Bolter and Gruisin meant), this particular form of expression brings the language to a sort of zero degree, it strongly underlines its characteristic of communicative potentiality: in short, the re-enactment is a kind of “performative statement”, in which the fact of stating something, the ability of language to put in order and express relational actions is more important than the content.