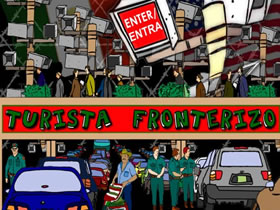 InSite 05 is the 5th edition of a show, developped since 1992 between San Diego (California) and Tijuana (Mexico). This project was thought to be set in and for these two cities, that from the end of August to November analyze the idea of Border and consider, throught artists and activists, Border as a mental and ideological concept.

Border betwwen Usa and Mexico is a entity with many facets: both a wall and a noone’s land in which everything was destroyed to allow better military- controlls over latinos who try to reach illegaly the American Eldorado. The Border is also the story of who tried with bad luck passing over the wall (or swim around it) without passing the customs (“con el coyote no hay aduana”, with coyote there’s no customs, sang almost 10 years ago Manu Chao). Or, luckily, he passed and now is working as a scullery-maid in a L.A. diner, wishing he won’t face police anymore.

The border between San Diego and Tijuana embodies itself the idea of difference, represented by 2 different cities with different languages, that is floating into that flow of human beings that trespass it every day. These 2 town have no border, it is impossible to define if their citizen belong to a city rather tha to the other: american freelancers living in the cheaper Mexico, dealers, legal or not, going in and out tocheck their business. And also radical students (and gringos) and workers.

All these characters define and flow into this atipic project. Its creators still prefer calling it Network, in which a huge number of cultural shakers, group of artistic and communicativ action, artists (some of them also from the Biennale of Venice or the Documenta in Kassel), act outside, right into the cities (the backbone of InSite, this year organized by Osvaldo Sàanchez), meetings, show in museum and galleries, lectures that involved powerful institution like the Visual Arts of the University of San Diego or the UNAM, Universidad autonoma de Mexico.

The Web site of InSite05 is, obviuosly, bilingual and it was thought to be the place to collect all the activities, which reach their best just in the moment they are placed one next to the other: fragments of a mosaic, they describe a specific reality but have sense only all together.

From these mosaic it is possible to understand that the so called urban post post context ( post industrial, post modern, post ideological), are going to be destroyed, that life in the cities is based on moving and on exchange, that Downtown couldn’t exist without Suburbs, that the paradigma of citizenship is going to fail said Osvaldo Sànchez  as the idea of border. Presenting art in a transnational land (San Diego and Tijuana are separated by less than 20km, a continuum of houses and roads in which it is hard to find a beginning and a end) means pointing out the coherence of the political and social system, that prefer difference rather than condivision and stillness rather than fluency.

For those who are reaching InSite 05, it is to notice Tijuana Calling-Llamando Tijuana, online project by Marc Tribe with works of Fran Ilich, Ricardo Miranda Zuniga, Ricardo Dominguez and Coco Fusco, Angel Nevarez and Alex Rivera. The most interesting thing about the online show is that every project is the result of a sociological investigation. Every work is the story of one of the thousands different reality of this peculiar land.

Turista Fronterizo, corealized by Ricardo Dominguez and Coco Fusco, is a great interactiv snakes and ladders . You can choose to be a freak girl of San Francisco, studying antropology andwanting to know the problems of the latinos, or to be a an atipic workers of Tijuana who want to find a better job, and following them crossing the border.

LowDrone, is the flying machine, with camera, by Angel Nevarez and Alex Rivera which tries to pass the border.

Corridos by Anne Marie Schleiner and Luis Hernadez is a 3d videogame, download and open source, that allow to pass the border using one of the tunnel used by narco dealers between Tijuana and San Isidro.

Dentimundo, dentistas en la frontera/ dentists on the Border Mexico/Usa, by Ricardo Miranda Zuniga Kurt with Olmstead & Brooke Singer, a trip into the dentists office of Tijuana that, as we learn from the karaoke in which the lyrics are pointed by a jumping teeth- studied in Unam in Mexico City and work near the border “Between Whore, drug sellers and mezcal” to cure the gringos who can’t afford medical insurance in thier country.