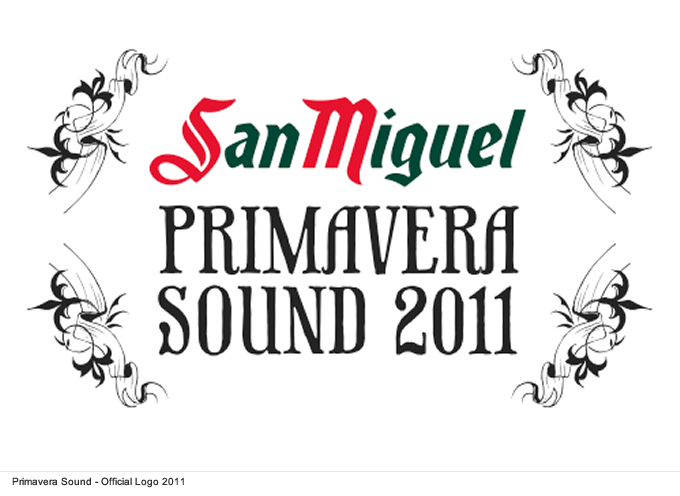 For more than 10 years the long summer of festivals begins in Barcelona with one of the most awaited events of the season. To confirm the excellent level of last edition, the organizers of the 2011 edition aimed high: more concerts, new city locations, more stages and, if possible, more people, or better publics – since this year the most indie among the European festivals gave a lot of space to the British and American electronic scene.

Even if it seems impossible to combine such a big number of so different bands on the same event, the Primavera Sound 2011 “back to the present” operation (http://www.primaverasound.com) managed to hit the bull’s eye. Three days – from May 26th to May 28th – of historic pop, rock and post-punk icons of the eighties and the nineties that performed on stage with new artists, offering more electronic and contaminated music than the post-dance, dubstep and hip hop wave.

The festival started at the Poble Espanyol, the place that hosted the festival’s first four editions, with the dream-like performance of the Canadians Caribou one of the most awaited band (the queue was so long and unexpected that only a few people were able to reach the stage and see their show – fortunately they played the following night at the ATP). The Mercury Rev Desert’s Songs live closed the festival. 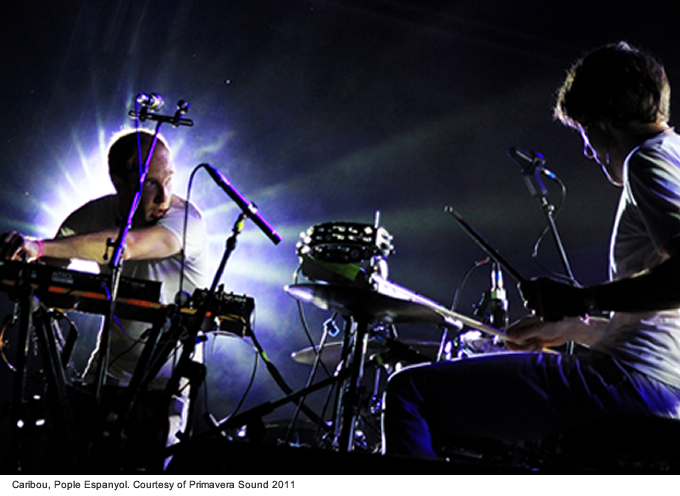 The “real” festival started on May 26th at the Parc del Fòrum: a huge space in front of the sea in one of the new areas that symbolizes the growing of city, where 7 stages were set together for a total area of 70.000 m². This year everything was about big numbers. At the 11th Primavera Sound festival edition came more than 140.000 people, with a 221 artists line up, and two weeks of events, workshops and screenings.

Compared to the 2010 edition there were two innovations: Primavera alla Ciudad with Sound als Bars and Primavera al Carrer, events that combined the same main location and the underground of different places of the city center; and the renewed PrimaveraPro, a meeting dedicated to people that worked for the festival with the aim to create a network between agencies, labels, festival and specialized press.

Including its locations, everything at the Pro (which was at its second edition) was close to the cultural spirit of Primavera and therefore extremely enjoyable. The events of the Day took place at the ME Hotel to go on during the night at the PrimaveraPro Adidas Originals. It was mainly focused on the interaction between three great music markets (the North American, the European and the South American).

This year, besides showcases and debates, the DayPro welcomed the first edition of the International Observatory of Music (IMO) – an organization that researches and examines the music sector in different local contexts and aims to find, analyze and stimulate new dynamics outside the mainstream market. 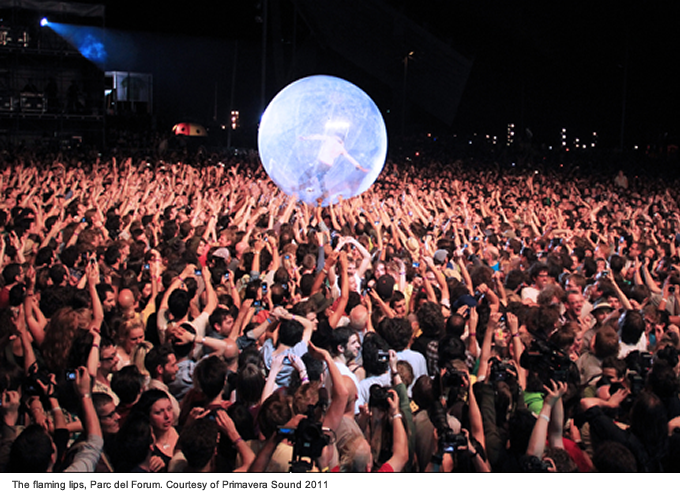 In addition to the dense line-up of concerts, the festival offered an event in collaboration with Cine Beefeater In-Edit.

The Parc de Fòrum’s cinema hosted the screenings of High on hope (Piers Sanderson, UK, 2009), Don’t look back (D.A. Pennebaker, USA, 1967), Soul train: the hippest trip in America (J. Kevin Swain & Amy Goldberg, USA, 2009), Nina Simone, love sorceress…forever (René Letzgus, FR, 2008), An Island (Vincent Moon, DK, 2010) and Upside Down: the story of Creation Records (Danny O’Connor, UK, 2010). It was like a sort of journey through the history of music documentary, that unfortunately did not draw the public attention that it deserved, probably because it was put in the shade by the festival thick core agenda.

During the first day/night at Llevant, Ray Ban and San Miguel there was a nostalgic “back in the days”, in some cases not too successful. At the same time at Pitchforl and ATP there was the Emeralds, Blank Dogs and Gold Panda show.

The best lives of the first day were something in between hot and not too rich hype (Salem, Of Montreal) and the adherence to a well consolidated cultural root. Seefeel, absent last year, after the acclaimed live in Paris for Warp20, were back after fifteen years with their last and homonymous album, made by sounds that put together the shoegaze substrate that consecrated them in the Nineties and more rough post-dub influences. 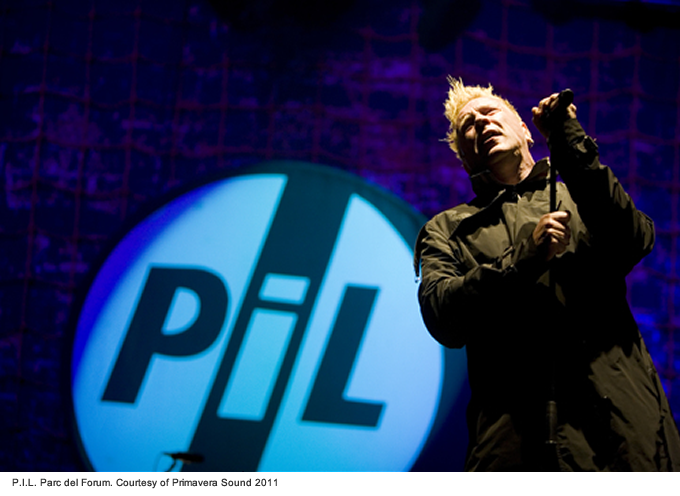 The night went on with a feeling of nostalgia and some great confirmations: after their big reunion in 2009, the concert of P.I.L, first stop of their long-awaited tour, moved the fear of an unemotional commemoration aside. Since their debut in 1978, post-punk started to grow and unfortunately ended up dissolving into different music forms. However, the band of John Lyndon and the prodigious Lu Edmonds performed, especially thanks to Edmonds, a live with new sonorities and great emotional peaks – This is not a love song.

Almost at the same time of Grinderman and Walkmen’s exhibitions was the Glenn Branca Ensamble, the project of six musicians (a reduction of the experimental and intense live for 40 and 100 guitars) started by the father of no-wave, an avante-garde master from New York who performed at the Auditorium a contemporary composition of harmonic noise, far from the use of drone meant as a noise opposed to symphonic classicism.

On the wave of sentimentalism, we were getting on with Suicide’s live, definitely one of the most evident influence in the music that we loved and keep loving but that was not too satisfying at the Primavera (perhaps we had too high expectations!).

At the Pitchfork stage was the time for Gold Panda’s concert, a clear break from the strong and comforting atmosphere of guitars and synths, but full of melodic suggestions and exhilarating beats. The Ghostly International’s mysterious musician from Essex was able to create a rarefied IDM universe, a dreamy and liberating alienation that opened to the abstract hip hop of the Baths (Anticon). 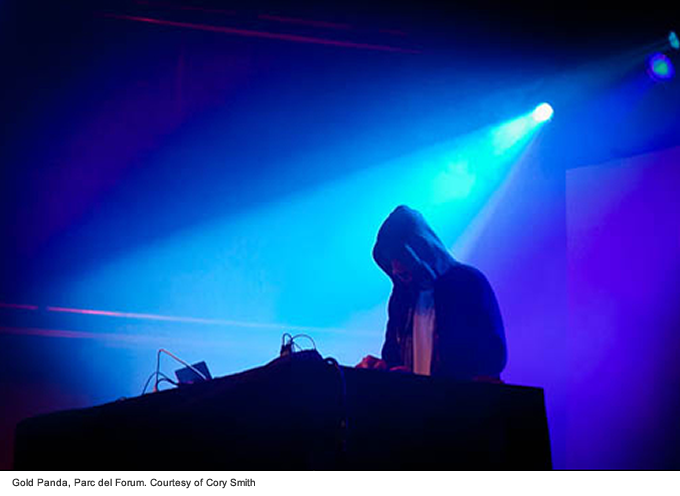 At the San Miguel main stage the Flaming Lips performed, in retrospect, the most psychedelic show of the festival (dancers-cheerleaders, colored confetti, laser shows with Wayne Coyne entering the scene by walking on the public in an aerostatic balloon) and created an atmosphere far from their last Dark Side of the Moon album, but undoubtedly spectacular.

The second day of the festival was an even more extreme dichotomy: thirty-six years after their milestone new wave Modern Dance, the Pere Ubu performed The Annotated Modern Dance, finally putting an end to the long descendent parabola that brought the Dada genius David Thomas to live unhappy circumstances in the Nineties. The Pere Ubu came back with a new formation to literally re-play their masterpiece from 1978.

The rhythmic part is stronger, the bigger updates overflow into the arrangements (which are less minimal and stunned) and into Thomas’ lost shrill voice. The singer, song after song, moved the audience by performing a record and a bunch of singles that marked the end of the seventies. Lighting with extraordinary aphorisms the writing path of the band in its happiest period, Thomas managed to transform a grotesque and post-punk game into a body litany.

While Low, Shellac e Arto Lindsay performed their own classics, Twin Shadow and Ford & Lopatin cleared the ground to Kode9 who brought all over Europe the Burial’s set, with some technical hitches promptly ignored by a cohesive and satisfied public: with the absence of the mysterious “king of dubstep”, we were still satisfied with a dj set.

The Pulp’s concert stood up for its number of spectators: more than 40.000 people came to see the band from Sheffield, leaded by the fascinating Jarvis Cooker. It seems that, ten years after the group split up, anthems like Common People (impossible not to sing and jump to honor our youth), Babies and Disco2000 are still evergreens for many brit pop fans. 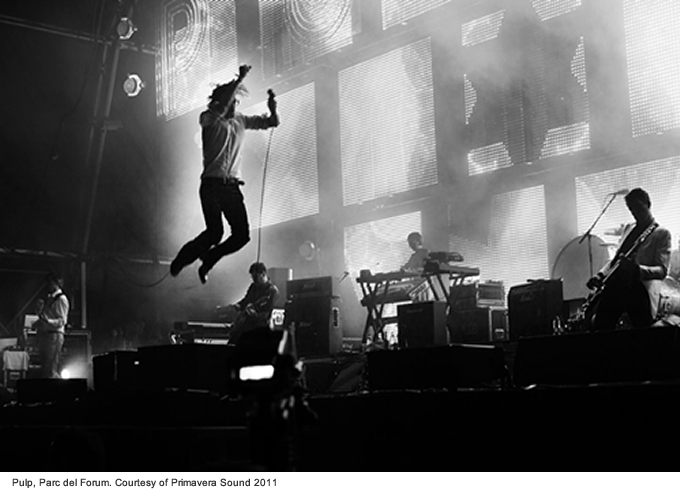 While waiting for the Battles, Jamie XX performed its remix anthology, from the most commercial Rolling in the Deep (for Adele), You got the Love (Florence and the Machine) to the collaboration with Nosaj Thing (Fog), until the post-dubstep productions and the beautiful We are new here. In the album he remade the masterpiece I’m new here, last work of the musician and poet Gil Scott-Heron (The Revolution Will Not Be Televised), a main figure of the Afro-American literary and music culture from the end of the sixties to our days.

A lot of people were waiting for a Gloss Drop’s preview, last work of Battles released on June 6th, and All star band, by Ian Williams, John Stanier and Tyondai Braxton did not disappoint the audience. Thanks to a man-sized double screen device, on which appeared Matias Aguayo, Gary Numan, Yamantaka Eye and Kazu Makino, they almost recreated a virtual interaction that, at 4 in the morning, was able to deceive even the clearest perception. It was worth to ignore our physical tiredness for a sound explosion that confirmed the high level of the previous Mirrored.

The right mood to end such intense day of listening was the space odyssey in Lindstrom Nordic key, that closed the Friday night at Pitchfork stage with the hit Where You go I go.

On Saturday, the last night of the festival, performances ranged from Einstürzende Neubauten, Swans, Pissed Jeans, Kurt Vile & The Violators and the most ethereal PJ Harvey version, Animal Collective, Gang Gang Dance and Darkstar. If with Battles we could talk about sound explosion, in this Primavera Sound edition Swan’s concert was a powerful and abrasive hurricane of sound. Fourteen years after the Soundtrack For The Blind, Michael Gira declared “This is not a return. It’s not a stupid nostalgic act. It’s not a repetition of the past”. And there is nothing more contemporary and immersive than Swan’s industrial noise. 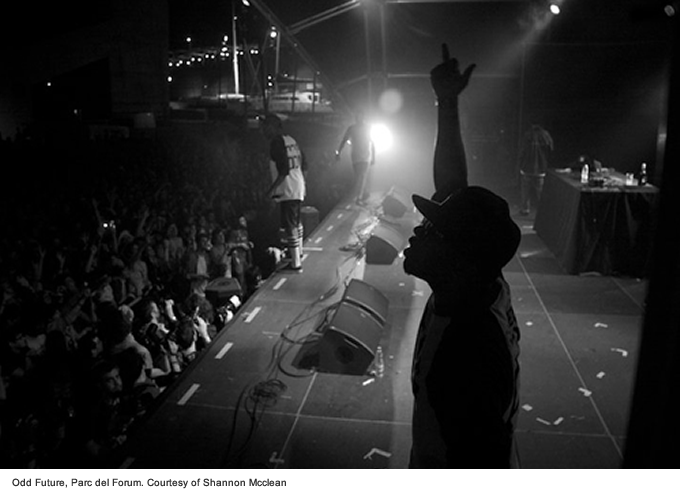 The distorted world music of the Gang Gang Dance changed the atmosphere completely; by being scenographic and amusing, they prepared the Pitchfork audience to the craziest concert of the festival. After an unforgettable break with James Blake e Mattew Dear, the Odd Future (OFWGKTA) came on stage with their horrorcore, lo-fi beat for soundtracks like Sandwitches, Splatter and Turnt Down with which Tyler the Creator, Frank Ocean and friends provoked a memorable collective stage invasion, the perfect conclusion for the Catalan three-days festival.

While Pitchfork was taken hostage by the people, Dj Shadow, with his last and awaited performance conceived for a round device, and Darkstar, with his obscure dubstep, performed at the other locations. Hyperdub, with Kode9 and Space Ape closed the festival.

Over all, the 2011 edition proved that the Primavera Sound Festival is one of the best European Festivals (together with the ATP). One month later, Jamie Smith’s performance remains the symbol of a good sense of nostalgia. Creator of The XX, Smith is an enfant prodige. On Friday night he played his remix I’ll take care of you by Gil Scott-Heron just while in New York the Godfather was dying at the age of 62.