Colorito. An Interactive Renaissance Of Coulour 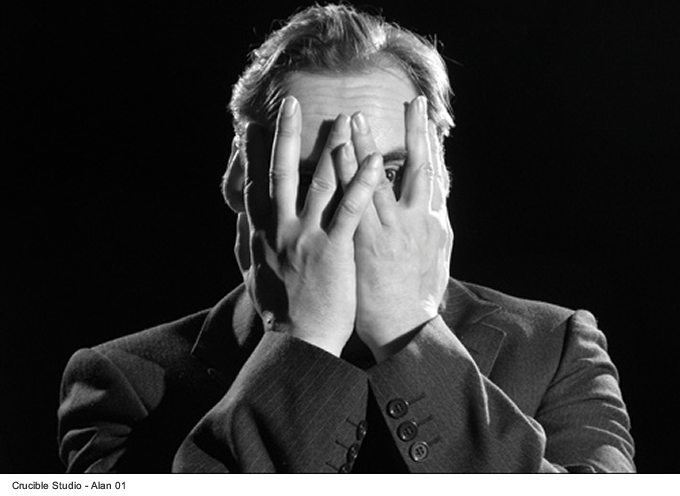 All at once, in the irregular Italian digital scenario, an interesting exhibition has appeared. It just ended on the 11th November 2010 in an unsuspectable location, Palazzo Medici Riccardi in Florence. Its title is Colorito: an interactive renaissance of colour, curated by Luca Farulli (Accademia delle Belle Arti, Venice), Andruid Kerne (Interface Ecology Lab/Texas A&M University) and Frank Nack (ISLA/University of Amsterdam) who proposed a mix of traditional names of digital art and young artists, linked by their interest for colour.

This exhibition was organized for the first time in Italy the last 25-29th October 2010, during the ACM Multimedia 2010 international conference (the worldwide premier multimedia conference organized by the Association for Computing Machinery). The event was coordinated by Professor Alberto del Bimbo, University of Florence, and Professor Shih Fu Chang, Columbia University, New York.

ALICE GOES THROUGH THE LOOKING GLASS

Monika Fleischmann and Wolfgang Strauss, historical new media art authors (have been creating virtual and interactive reality projects since the ‘80s, co-founders of Art & Com) displayed a work realized in the ‘90s, Liquid Views-Narcissus Mirror (also exhibited in Italy in 2000 at Ars Lab exhibition), with updated configuration and software.

A monitor simulates the surface of a body of water; the viewers (Narcissus) see their own reflected image. When they touch the screen, they can distort their mirror image. Everything happens in real time and really effectively. It highlights some key elements of digital art: interactivity of the viewers, their participation in the art work, which is open and modifiable. Viewers take part in the idea of virtual reality as “Alice’s mirror”, and as an doorway on the surface of the image. 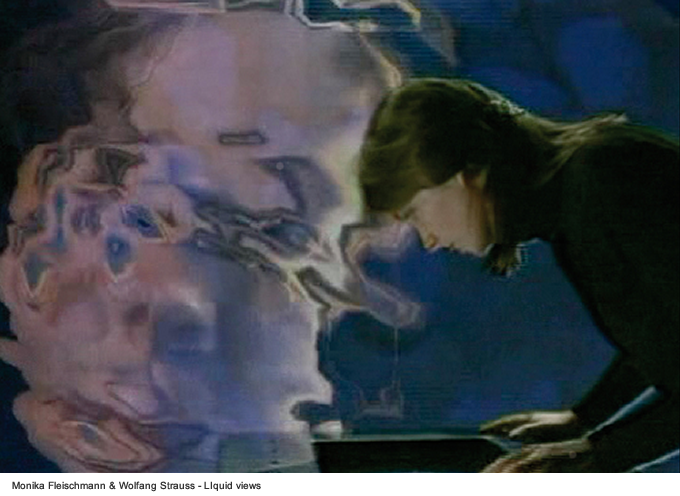 To immerse oneself “through the mirror” still has a great meaning in digital languages, while the 3D immersion is still a promise; creative experimentations, to assume the idea of immersion and virtual double in new media art are still the most convincing.

Today more than ever before, “Liquid Views-Narcissus Mirror” represents a meaningful metaphor making reference to the increasingly narcissistic (not only communicative) value of media. Such narcissism started invading not only the field of television, but also the new media. The concerning point is the substitution of the early consciousness of self-management with the intrusiveness of social networks (like Facebook) where communication becomes “reflection”, self-representation an maybe, in the future, control.

Franz Fischnaller has always been focusing on the application of digital languages to communication/exploration of the museum and city, and has proposed a wide-range research. This rightly ambitious project is part of the research of a visual “doorway”, of an analysis/research intending to enquire (with digital media) the expressive structures of the painting.

The question is about the mechanics of pictorial creation, and its scientific precedent is represented by new via-“scanning” analysis techniques of classical paintings whose colour superimpositions and chronology (and even the finest pictorial treatments) can be defined. Inside the mystery (the perceptive structure?) of the art works, digital media can enquire not only to communicate the ultimate sense of aesthetic perception (which is impossible), but mainly to broaden empirical or correct knowledge of image configuration processes in new ways. Such processes catch the attention of users as well as insiders.

A concrete immersion, an exploration of the image creation substitutes to the immersive entrance of scanning. Beyond aesthetic development, the pedagogic effects of such research are already visible, because the doorway in the art work opens new interesting interpretation. 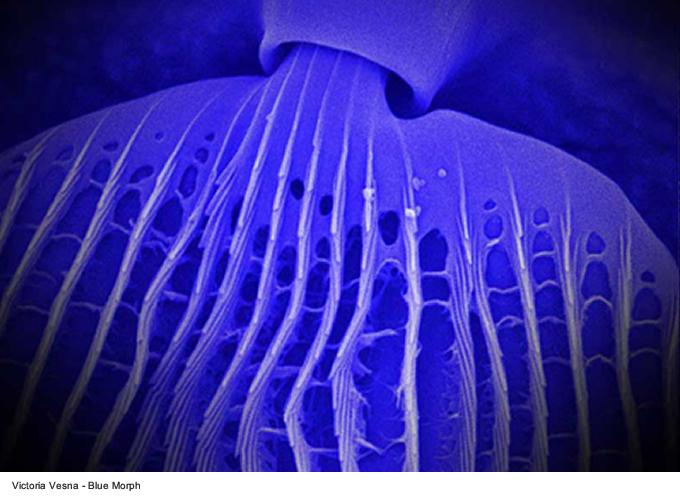 Victoria Vesna (in collaboration with Jim Gimzewski) presented one of her most known works, the nano-art project Blue Morph, that tries to reproduce and make the user perceive what “being a butterfly” means. The Blue Morph butterfly’s life is short life (2 or 3 weeks) and is always put in artificial containers at the stage of caterpillar.

The installation mimics the transformation, fragmentation and fall of butterfly’s beautiful wings whose typical colour is determined by their nanostructure, while we can hear eight pumps of hearts activating the little organism thanks to their pumps that remain constant during the transformation of a (relatively) short life.

Sounds and signs of such a powerful and relatively short experience are passed on to the user through earphones. The user is inside a structure resembling the caterpillar at the moment of transformation, while a blue light flashes inviting the user to identify with the animal and the perception of nature. The sensation of an Avatar/butterfly represents one of the goals of such project, an experience of psychological/cultural “double”, of human/animal identification.

They go back to Bianco-Valente astronomic ideas, who traveled several points of the planet for their project. They have obtained a different idea of space and time through the projection of images of nature, woods, landscapes that, with a sound loop in background, makes reference to different spots and perspectives of the planet. 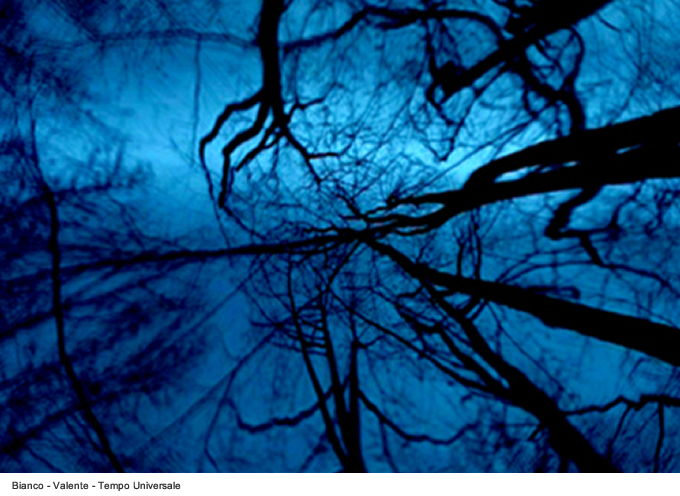 The meeting point between different iconographies and iconologies was the subject developed by the Japanese artist Tamiko Theil. In The travels of Mariko Horo, she imagines a double voyage between two distant cultures finally meeting. It is an interactive/navigable installation crossing spaces between Western Christian and Eastern Buddhist cultures.

Christ and Buddha mix up and Venetian nobles of the XVIII century have oriental faces under the wigs of the time. It is a sort of “voyage in the images” and on the images, with an extremely fascinating strength. A voyage in the images raising the problem of new hybridizations and syncretism resulting from the meeting of different cultures whose aesthetic and cultural effects are difficult to define.

After all, iconographic exchanges between different religions already started in the past with the influences and exchanges between Christianism and Buddhism, and with the bright and hyper-real colours of their cultures. That’s how the exchange becomes chromatic.

Black and red are the colours of the installation conceived by the Finnish Crucible Studio (Jaakko Pesonen & Teemu Korpilahti) that engages the audience in a dialogue with Alan Turing, one of the fathers of computers and computer-science, an heroic World War II code-breaker tragically died in 1954.

Using a coded language, the audience can interact through answers and questions with a fictional Turing. Codes were Turing’s psychological and cultural background and he is represented through them. 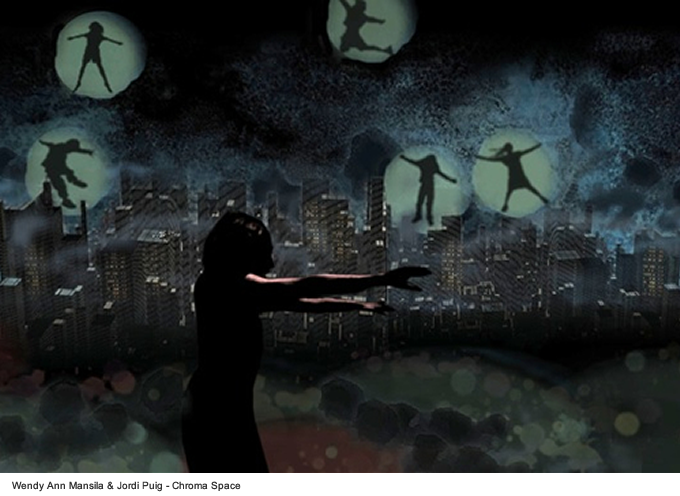 The choice to let “speak” historical witnesses and personalities is a periodic event in the field of digital art, and the solutions go back to the electronic individual, the robot era, more simply, to store “everything” using new software. To store consciousness, memory, to place the brain in a “shelf” you can always look at is increasingly attractive element of digital philosophy. This kind of memory tends to be the “mise en abyme” of our mental processes.

The memory record is the continuation of biological body. A record becoming more and more complex and difficult to configure.

THE COLOUR IN QUESTION

In Chroma Space, Wendy Ann Mansilla and Jordi Puig investigated psychological effects of colour. The body interfaces with the chromatic transformations of a black-and-white landscape. An example of applied arts (maybe), the way it happens for the art works created by Leah Buechley who worked on the possibility to change the environment.

In all the works exhibited, colour as “colour paint” has a key role. In Hayley Hung and Christian Jacquemin’s installation, one of the greatest informal colourists, Mark Rothko, has been reproduced. Such reproduction has been minimally changed inside an interactive system picking up the audience’s reactions and transforming them in chromatic variations.

Many times colour in digital pieces has been weighted from an aesthetical point of view, but it has always been a marginal element because digital colour has been the industrial colour of software so far. It has been used taking into consideration its kitsch and pop values and its “typically” digital features. 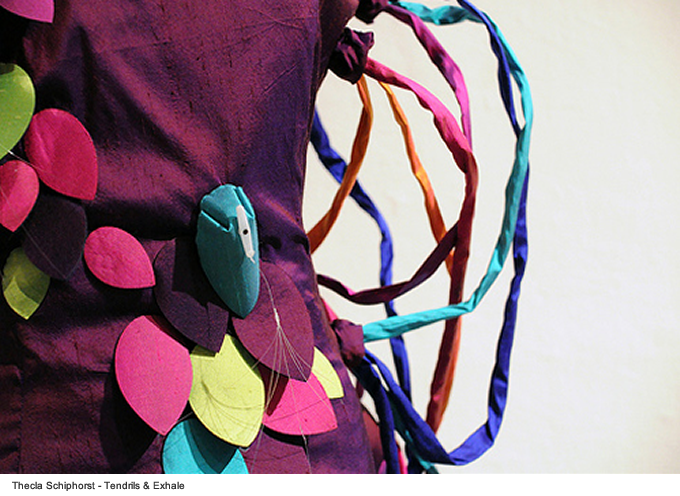 Colour represents a deep break between new media art and contemporary art – also the impossible colours used by MuraKami in his works become more tolerable than videogames “non colours”. The first strong point of the exhibition is the perspective on colour that it proposes; the second strong point is the reassertion of the interactive, immersive research, and the operative eccentricity of digital world.

The omission of a complete section (linked to complex devices) of digital philosophy from the book “New Media Art”, published by Taschen and written by Mark Tribel in 2006, is surprising. Such choice is based on old software obsolescence as well as their deficiency to support expressive needs of the art works exhibited. On one hand we have to find the way to include new media art in contemporary art context (as it is presently happening), on the other hand we have to claim its most heretical aspects and most unbridled whims occurring in the moment of technological turmoil we are living in.