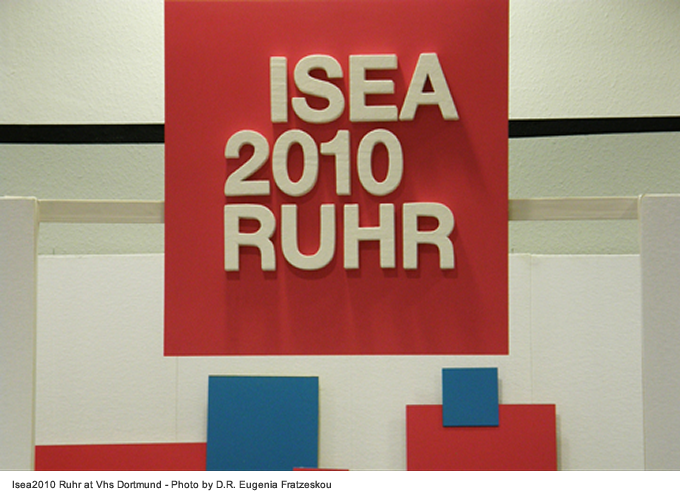 ISEA is the world’s most important international festival for digital and electronic art. It has been organised under the auspices of ISEA International and taken place at prestigious institutions across the globe since 1988. This time, ISEA moves to Germany for the first time, forming part of the projects of RUHR 2010 European Capital of Culture. The festival takes place at various venues in three cities of the Ruhr metropolitan area, enabling a creative exchange with the local art scene and industry: Dortmund (where the Hartware MedienKunstVerein, one of the most important media art addresses in Germany, has been located since 1996), Essen, and Duisburg [Figs. 2-3].

ISEA2010 RUHR presents current developments and debates in contemporary art and digital culture worldwide. The ISEA Conference has been complemented by a series of exhibitions (Exhibition ISEA 2010 RUHR, TRUST, Heavy Matter, Arctic Perspective and many others), the “E-Culture Fair” (a trade fair for the innovative cultural use of new technologies in cooperation with Dutch and Belgian partners), excursions to museums etc., concerts, club music, a weekend with performances, workshops and art projects in public space . 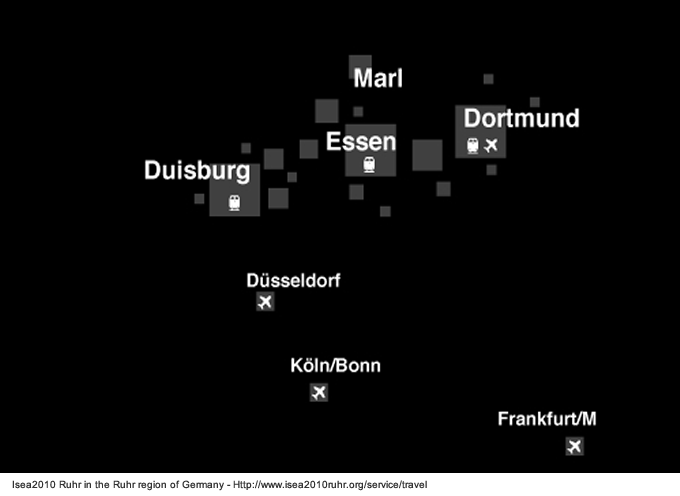 The artists engage with experimentation on new interfaces between art, science and technology, climate change, deconstruction of identity, new design strategies etc. The Conference Proceedings and the relevant exhibition catalogues published by ISEA offer a comprehensive high-quality documentation and commentary on ISEA2010 RUHR .

From 20th to 29th August 2010, the international academic conference has brought together 230 speakers, including artists, academic researchers, scientists and other professionals from 40 countries e.g. many European countries, Brazil, Japan, North America, the UK and others. To achieve the highest standards, all conference contributions have been selected from over thousand proposals through a peer-reviewing process. The ISEA International Reviewing Committee includes 88 experts of 29 different nationalities from various media art related fields.

Apart from the presentation panels, the ISEA Conference has also included a keynote program with Brian Massumi, Peter Weibel, Roy Ascott, Margaret Morse, Harald Welzer with Marko Peljhan, David d’Heilly with Fernando Garcia Dory, round-tables and workshops that have been realised with the cooperating institutions. Judith Funke has been the Project Manager for the Conference and one of the ISEA2010 RUHR Conference Proceedings editors.

At the ISEA Conference, crucial issues of the current debates in electronic art and media philosophy have been discussed. The themes have varied from aesthetic discourses to questions of art and engineering. The focal points of the Conference have been ‘Sounds’ and ‘Ecologies’. Among others, there have been panels on art and media in Latin America, on new art theory, on preservation of historical media art, on the phenomenon of materialisation and dematerialisation, on the role of the user in digital art, on the emerging notions of spatial layering & hybrid realities, on the latest developments in code art etc. 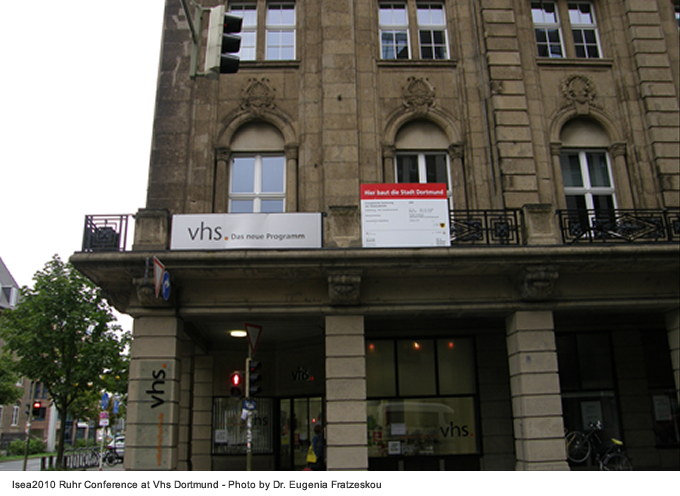 Unfolding Space is the presentation I delivered as part of the Algorithmic Topology panel, one of the 51 panels of the ISEA Conference. The panel has been moderated by Timothy Druckrey (Director of the Graduate Photographic & Electronic Media program at MICA, curator, writer & editor) and has taken place on 27th August 2010 at VolksHochSchule Dortmund.

The first part of my presentation has offered a discussion on how what can be described as the shift from Modernism to “informationalism“ has necessitated new spatial research strategies for advancing contemporary site-specific art and architecture. As resulting from the advancement of information technology, Einstein’s theory of relativity and quantum physics that have brought radical changes in cosmology, science, art, design and philosophy, the notion of space has significantly changed.

There is no void and neutral space as such, but data flows in dynamic interaction with each other, the environment, matter and users. Multiple relativistic spaces with various types of geometry, emerge . As space itself is neither uniform nor inert, the notion, morphology and functionality of the conventional boundary of built architecture are radically challenged. This condition has inspired contemporary artists’ and architects’ interest in visualising and creatively engaging with the invisible and unknown co-ordinates of reality and perception, through revealing various fields of interaction between the environment, matter, technology and users.

n the second part of the presentation, the manifestation of inter-spatiality is proposed for enabling the advancement of digital site-specific art and drawing through a creative in-depth investigation of the relationship between the digital and the physical spaces of architecture. A conventional type of Modernist built architecture can be perceived as a materialised 3D fragment of a grid. An exploration of the paradoxical ‘in-between’ spaces that emerge between the various orders of place and space, can be realised through inventing inter-passages (instead of inter-faces) between those orders. In particular, it is possible to visualise the ‘residual’ spaces that occur between the superimposed and interacting algorithmic, geometrical, topological and structural grids of architecture. 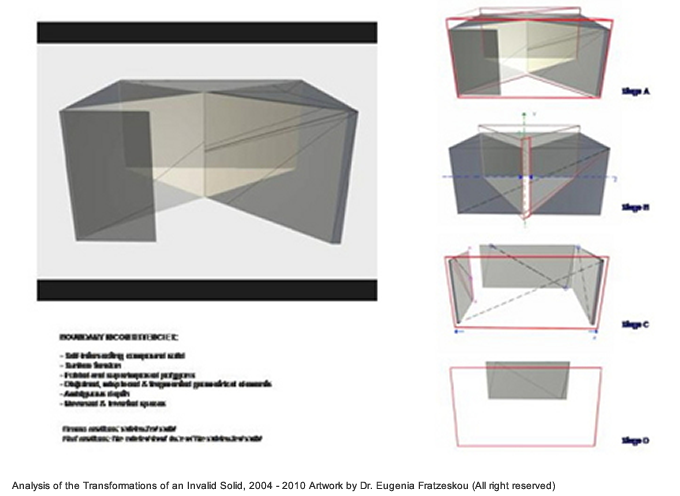 As deriving from the algorithmic matrix of VR, the arithmetic order of the grid is flawed, challenging thus, the traditional definition and status of the architectural boundary. Several precarious interplays occur between complexity and abstraction, while modelling architectural space. The heterogeneous ‘residual’ spaces that emerge and contain various types of unknown and unregulated geometry and spatial orders, are left open-ended.

The manifestation of inter-spatiality could not have been achieved without the in-depth practical and theoretical investigation of digital visualisation systems – which has included their philosophical and mathematical foundations . In this way it has been possible to develop new types of site-specific drawing within semi-immersive room-sized virtual environments.

The hidden dimensions of architectural space that remain unregulated, elusive and un-built are revealed. Unknown and ambiguous types of space appear, as we pass through various spatial orders and geometrical paradoxes. The manifestation of inter-spatiality enables a new philosophical understanding, experience, and perception of space, that inspires new types of spatial research and practice in art, architecture and the related disciplines. 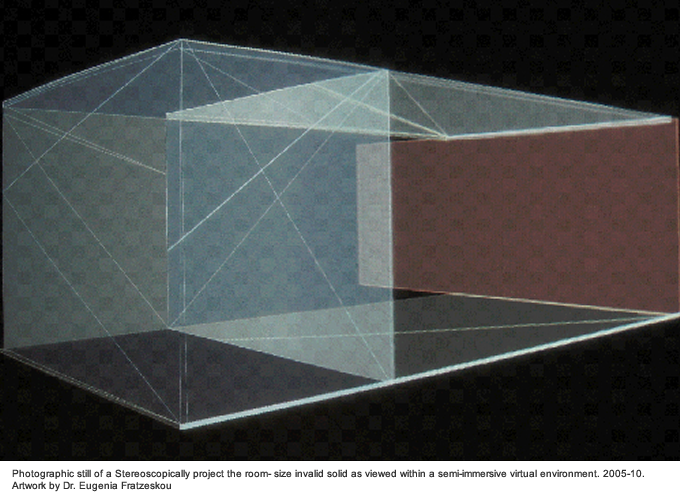 The Algorithmic Topology panel has included another three presentations that discussed new inspiring advancements, proposed new directions and demonstrated high standards and potential in this area of academic research, professional practice and theory.

Gabriel Menotti (PhD Candidate, Media & Communications departments of PUC-SP & Goldsmiths University, independent media curator and producer) has presented his paper Computation as Dynamic Topography. The Coordination of Algorithms, Apparatuses and Architectures in the Production of Digital Images. Menotti proposes a spatial paradigm for the evaluation of computational processes in the engendering of technical images. Not only graphical interfaces but also programming languages with their protocols, add layers of abstraction and metaphor, diffusing thus an understanding of computing and code as a physical and spatial extension. Nevertheless, as Menotti explains, “computation has more to do with architecture than with writing”

The project Betaville has been presented by Martin Koplin (Managing Director of the M2C Institute for Applied Mediatechnology & Culture, Bremen & Scientist in Residence of the Brooklyn Experimental Media Centre, NYU), Prof. Carl Skelton (Founding Director of BxmC & Integrated Digital Media of NYU Polytechnic Inst.) & Prof. Helmut Eirund (Scientific Director of the M2C Institute for Applied Mediatechnology & Culture, Bremen). Betaville is a new open-source multiplayer environment for fictionalizing the city of the future as art, and promoting real civil participation in urban planning. The inspiration for and growth of Betaville has been based on a key shift in understanding urban space. As the authors explain “the radical plasticity of any urban environment is now a creative opportunity, rather than a constant threat”. Betaville operates through a “mobile-stationary AR environment for smart cities”.

Dr. Lone Koefoed Hansen (Asst. Prof. Aarhus University, Denmark) has presented her paper Practicing Generic (City). Reconfiguring Life through Digital Media. According to Flanagan, most locative media artworks neglect the particularities of spaces, while for Koolhaas, we face a global Generic City. Through analysing the artist Esther Polak‘s NomadicMILK (2008), the author discusses “how locative media can reconfigure (the experience of) a location from generic to particular and vice versa, even if only temporarily. The aim is to identify the possible reconfiguring practices of locative media. 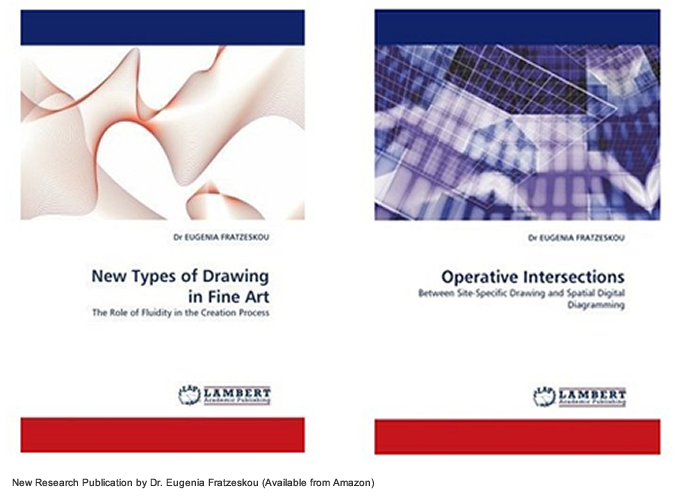 ISEA2010 RUHR has been a highly successful, exciting and well-attended event. The ISEA 2010 Team, the International Advisory Board, the Jury, the cooperating institutions and all those involved in the realisation of all aspects of this year’s festival and publications have achieved an excellent program and organisation. Congratulations are also extended to all the participants, as they have presented the highest standards of collaboration and have offered significant insights with regards to contemporary research, practice and theory. Their contributions will be shaping the future of Media arts and philosophy as well as the related fields. This is why ISEA2010 RUHR has been the world’s most important international electronic arts festival.