I Am Open Cv. The Augmented Art Of Jeremy Bailey 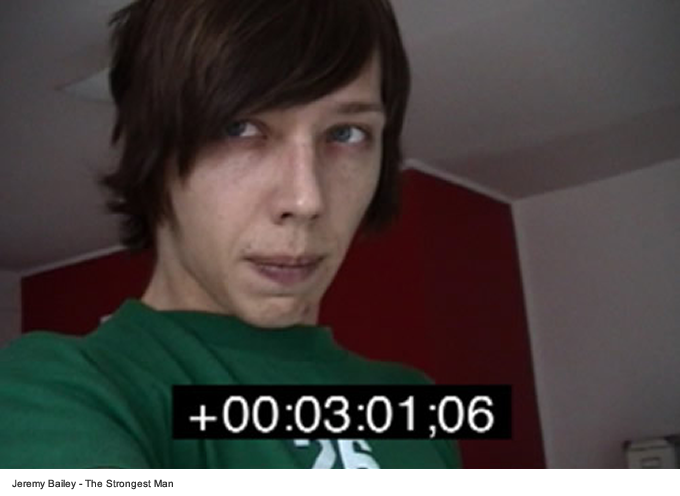 A native of Toronto, “funny man” Jeremy Bailey is a visual artist working primarily in electronic media who has been described by Filmmaker magazine as “a one-man revolution on the way we use video, computers and our bodies to create art” and as “often confidently self-deprecating in offering hilarious parodies of new media vocabularies” (Marisa Olson, Rhizome). His work has been featured internationally in numerous exhibitions and festivals, and he received his MFA in Art Media Studies from Syracuse University in 2006. Currently his work can be viewed, rented and acquired through the independent on-line label Vtape.

Being a Toronto native, his work is well grounded in a McLuhanian philosophy of media technologies as extensions of our sensorial and communicative functions, and this is particularly evident in his latest works dealing with computer vision and augmented technology. Ad example in his project Public Sculpture (2010) he develops a software enabling him to interact with fictional geometrical objects that function as an ironic critique of the “augmented reality aesthetic” so pervasive on the contemporary entertainment and gaming market. His commentaries are as heroical as firmly based on a radical vision of the dystopias of our modern media-scapes.

His work is often presented as interactive or participatory performances: his WarMail (2008) show, commissioned by HTTP Gallery in London, is a collaborative performance led by himself that use the audience’s “latent song and dance potential to write and send an email to his mother while simultaneously directing a so called space war campaign”, while in SOS (2008) he produces a live performance and a series of short videos made for the Canadian television show King Kaboom, offering “an user’s guide to a new “visual operating system” invented by artists”. 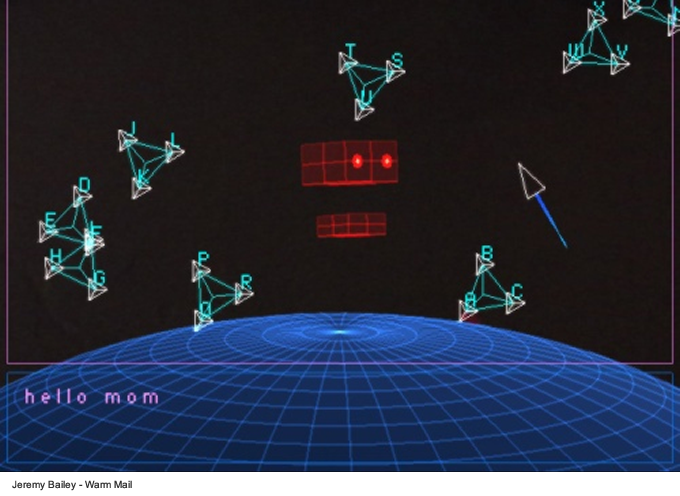 The most interesting aspect of his works is the way he uses a sort of “Youtube” language bto directly address the public, in a mix-mash of video art, technical demonstration and 0.2 illusionism.

As I missed the opportunity to assist his show at the group exhibition Video Collide in Real 3D Space at Five Thirty Three Gallery in Los Angeles this past March, I asked him for an interview to get an idea of his prolific work. What came out of our discussion ranged from ’70s performance art, augmented reality, Karl Marx and demo culture, among other things.

Mattia Casalegno: In 8.7 MB (2002), one of your first pieces, you “attempt to explain the process of extreme computer video compression on [your] image while simultaneously acknowledging the multitude of other devices that interfere with one’s identity”. What the heck does this mean?

Jeremy Bailey:QYes, that is very early work. I did it while I was still in undergraduate school. It was fundamental to a thesis I was just developing and which I fully explored in graduate school. This thesis is a sort of update to the 1970s term “Performance for the Camera,” in which the artist acknowledges that the camera itself is mediating the performer’s identity. It’s really just a hyper-awareness of context.

In the same way that a lecture about peace would be received differently in front of the Brandenburg gates, a monologue about my feelings is different when it is compressed by a mathematical algorithm and uploaded to the internet. When I made that work, putting videos online was a new idea, in fact digital video was a new idea! There was some anxiety about this, that the work would be different if it was viewed on a small screen, or a computer screen, or in a living room, instead of a gallery. From this point forward I decided that all of my work would be made with the assumption that it would be seen in a way that compromised itself.

What’s funny to me about the people that had anxiety about this at the time, is that video art was born with this assumption, everything about early video art has this assumption built right into the work. So ya, compromise, disappointment, anxiety, fear, uncontrollable intent, reader privilege, confusion, complexity?hese all become central themes for me after I made this work. 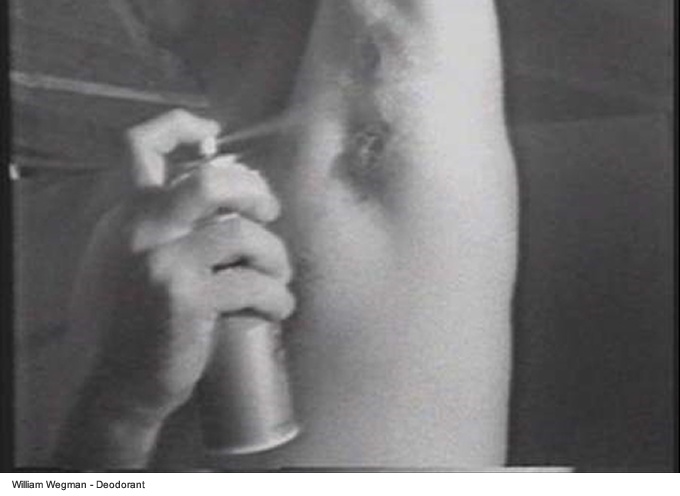 Mattia Casalegno:PThinking about the “Performance for Camera” of the ’70s reminds me of the William Wegman video Deodorant (1972), in which he spends a ridiculous amount of time, while applying his deoderant, explaining why he likes it, ending up with an enormously white armpit at the end of the video. This sort of anti-spot was also a critique of the role of TV in a mass-mediated environment. How has this “hyper awareness of context” changed in the era of Youtube and social networking? What kind of new compromises do you have to face?

Jeremy Bailey: That’s one of my favorite videos ever! I believe YouTube is basically 1970s performance video as popular culture. It’s a response to the same mass-media environment; you have all the same factors present: accessible technology, repressed narcissism, and a community of supporters. The difference is that this interaction is happening inside a computer and across the Internet instead of a local art scene. If I had to identify a compromise it would be that videos created in the era of YouTube are mediated heavily by software interfaces that influence the type of content being created. Any video on YouTube essentially can be viewed as a video about YouTube.

Mattia Casalegno: And with a visual language resembling the first body performance of the ’70s, in Strongest Man (2003), you try to hold a camera at arms length for as much time as you can

Jeremy Bailey: This is an early example of me trying to make obvious the mechanics of a narcissistic circuit between the recording device and the performer. This work was veryspecifically made in reference to an 1970s performance for the camera aesthetic. There’s an essay by Rosalind Krauss that I often refer to from the ’70s, called The Aesthetics of Narcissism, that describes this circuit really well.

I was really interested at this time in disabling my white male identity/ego. The camera itself, the thing necessary for me to show you how strong I am, how much of a man I am, is the very thing that disables that identity. The little joke here is, of course, that in the 1970s this type of camera would have been huge and heavy and impossible to hold up but when this video was made cameras were quite small (someone told me once that such a video exists from that era, but I have never seen it).

Ultimately, this piece is the first key to understanding the way I feel about technology, which is this thing that augments bodies and identities while simultaneously disabling them. There’s a great analogy in Karl Marx’s Das Capital that distinguishes between a tool and machine. To paraphrase loosely it says something to the effect that “a tool is something that you use and a machine is something that uses you.” I am very interested in this line between tool and machine. It’s really a question of who is in control, and in art, control is a pretty big topic of conversation. 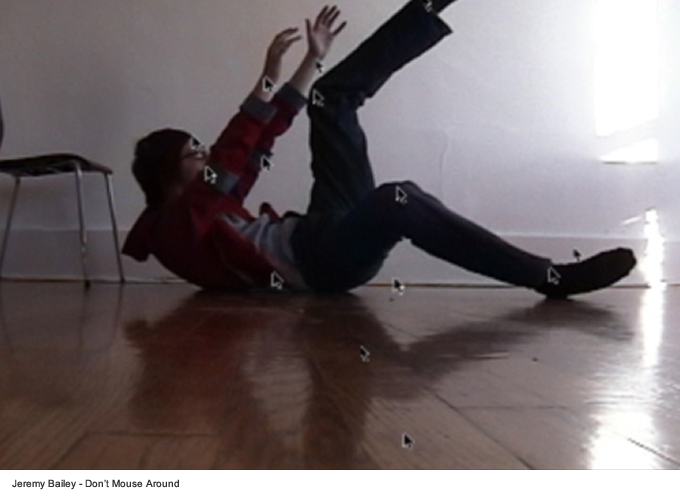 Mattia Casalegno:You often use a demo aesthetic as a medium itself for demoing your own works. For example, on your website almost every piece has a detailed technical and conceptual explanation that can be experienced as the work of art in itself. How do you think this approach can add meaning to, or influence, your work?

Jeremy Bailey: Yes! like I said above, because of this reference to computer artists and demo culture, and this aspect of showing off the machine (the software) as this sort of divine creation, an externalization of the artist’s body, it is these very demos or sketches that most intrigue me. The technical aspect of the work is a stand-in for my body, for my identity. I am not Jeremy Bailey, I am OpenGL. I am not Jeremy Bailey, I am Open CV. I am an API for the software that uses me.

Mattia Casalegno: But at the same time you are the subject and main actor of the video. In a way you’re used by the software, but at the end there is always someone in front of a camera explaining how to do something. I think demo culture is as much about knowledge and sharing as the power that knowledge exerts on individuals. And ultimately this is an issue of how this power is related to consumerism and the production of desire. The other day, I stumbled on this YouTube video by Michelle Phan, a teenager who made a demo about how to apply make-up à la Lady GaGa in the Poker Face video. This demo now has almost 20.000.000 hits.

Later, I found out that Michelle Phan is a spokesperson for a big thai cosmetics company and the demo functions as a viral marketing tool. I think that, in a completely different context, your demos share the same language and methodologies of this viral tools. Do you see some analogies, and how do these relate to the idea of “externalization of the artist’s body” that you mentioned?

Jeremy Bailey: Yes of course, we’ve long since entered an era where branding and advertising have intermingled with personal identity. This “brand of me” culture implores us to promote ourselves as products, like a new chocolate bar or version of Photoshop, we’ve all become PR agents for ourselves. I can’t remember the last time I used Facebook or twitter in a sincerely personal way. Instead, these are tools that have transformed my social life into a network I can leverage to increase the popularity of my brand. My own work has addressed this satirically for a while: I feel new media art is particularly guilty of creating artwork and contexts that are easily supported and sponsored by brands but that doesn’t consider how this entanglement actually effects the work. 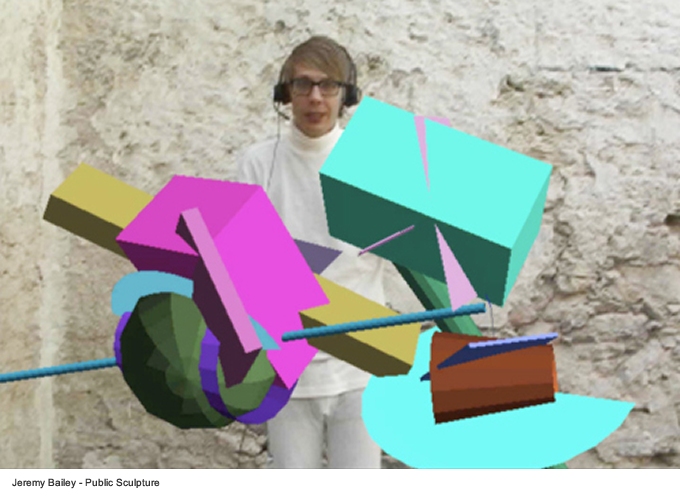 Mattia Casalegno: The idea of technology as an “extension” of the body-but also as something that inhibit the sensorial-come very much from the Toronto school, McLuhan and then DeKerckhove. I can see this approach aestheticized in your augmented reality works, such as your Public Sculpture project (2009) and your Gundam Suite proposal. What is your interest in working with augmented reality technologies?

Jeremy Bailey: Absolutely, for me this tension between liberation and restriction (tool and machine) is essential. As interfaces become more and more physical, I think it’s really interesting to consider how we might change our behavior to adapt to the needs of software. Ultimately for me, augmented reality is the most literal way of describing this tension. All of my work attempts to sandwich the body between the interface and reality. This experience is always clumsy and requires me to compromise myself on behalf of the interface. I think it’s not only interesting to consider how we physically adapt to these circumstances, but how we might also cognitively or even morally adapt to them.

Augmented reality when applied to the body is this amazing place where the aesthetics and evolution intersect, and the authors of this new soft biology are a handful of engineers and computer programmers as flawed as the users controlled by their interfaces 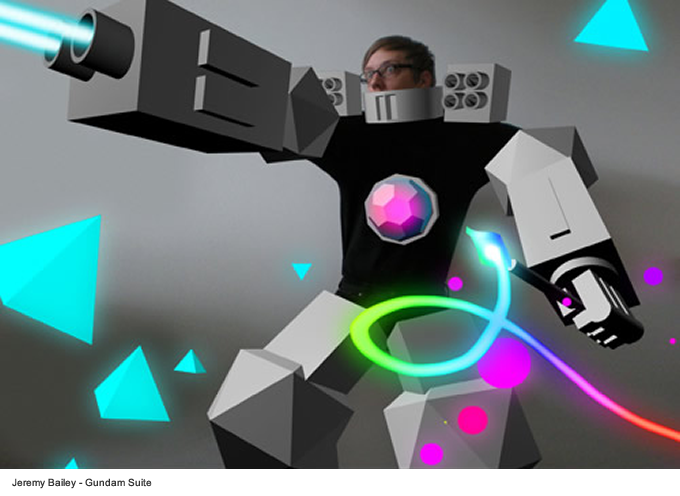 Mattia Casalegno: “Augmented reality” now is the buzz-word of the media, entertainment and gaming industries: do you have any idea about the directions this “soft biology” will take regarding to those markets?