The Silences Of Biosphere. Neo Baroque And Aware Intimacy 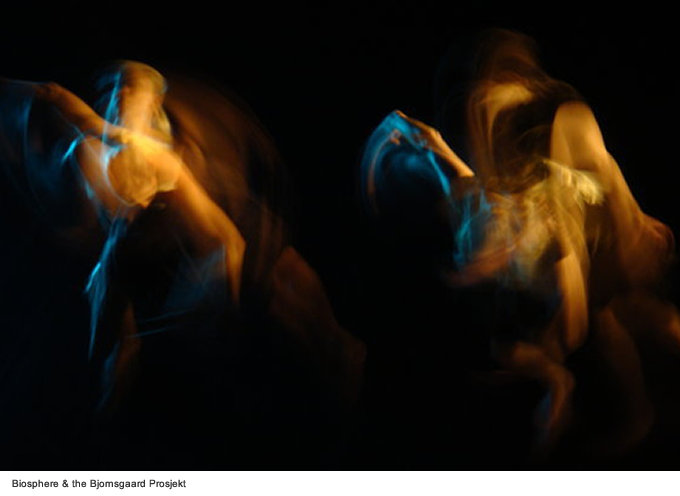 Geir Jenssen, also known as Biosphere, is one of the most important figures in the field of contemporary electronic composition. Norwegian origins, from Tromsø, a town immersed in icy silence, 500 miles away from the Arctic Circle. Atypical personality, friendly and quiet, he always prefers to communicate through sound, like the sound of his records, of the many installations he designed in the last years, even of the performances.

Thisnom de plum was born twenty years ago from fascination to the Biosphere 2 Space Station Project, a gigantic glass dome in the Arizona desert within which whole families have lived for years, to test the possibility of building a self sufficient and alternative ecosystem to the terrestrial one, in the outer space. Therefore Biosphere was dedicated to build an arctic sound universe, characterized by the combination of the manipulation of concrete materials, dancefloor rhythms and a kind of cold ambient (Substrate, 1990, is the work that resumes this last aspect).

In the recent work Dropsonde (2006), Biosphere offers sidereal techno and ambient atmospheres, pulsating frequencies and wrapping basses . The same atmosphere of Patashnik, 1994 record and Jenssen’s second work, probably his most successful one. The distressing and rarefied environment, the suffocating basses and that cold and concrete sound which makes Biosphere’s work so recognizable, expresses at its best in this work. More generally, the landscape intent of these sound compositions is never completely concealed behind the electronics: landscapes covered in snow, mutating ices, wind, and mist, the breath of the world, those that are the most silent sounds of the Earth pulse, found in Jensenn’s work a lucid sound transcoding.

Furthermore, in Patashnik, as well as in the previous Microgravity, the space dedicated to rhythmics (almost absent in most organic work like Substrata) is still very large. The disc is in fact, as his entire first production, is closer to the territory of minimal-techno rather than narrowly ambient, creating a sort of Ambient Techno. A speeh device oxymoron, able to define this autarchic, unique and expressive figure. 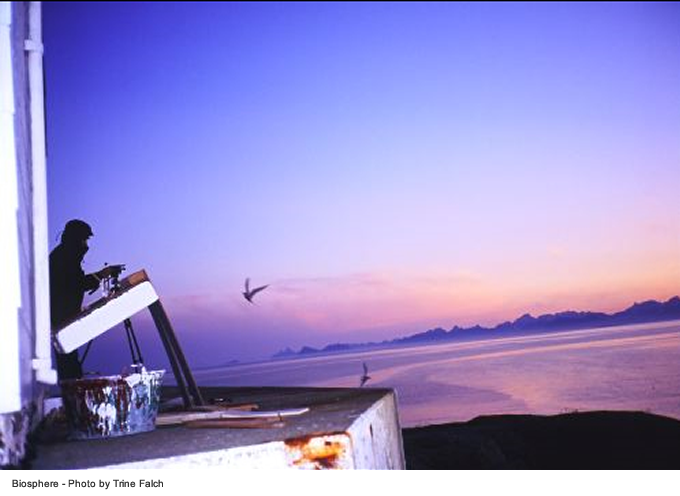 It was right during the presentation of a dance and sound performance, that we met him surrounded by other silences, the woods and the deep valleys of S. Angelo dei Lombardi in Irpinia. There, he was commissioned by the Sentieri Barocchi project (focused on the electronic way revisitation of the baroque aesthetics, with important artists such as Murcof and Philip Jack), to re-intepret the work of a leading exponent of Baroque music as Claudio Monteverdi. Together with the Norwegian dance company called Bjornsgaard Prosjekt, the artist offers a very personal version, of great attention and impressive sound deepness, of the Poppea coronation, the 1642 Cremonese musician masterpiece. During the breaks from his silences, Geir Jenssen distils thoughts that are everything but banal…

Pasquale Napoliano: Let’s start from the present: since you got involved with the category of baroque, what do you think are the affinities between your production, your sensitivity and this stormy culture?

Biosphere: The love of Monteverdi, a pure great experimenter.

Pasquale Napoliano:More in general, without having to disturb Deleuze, Leibniz’s interpreter, among the identificative categories of the Baroque aesthetics you have fragments, the fold, the ruin. Beyond the single case, don’t you believe that there is a deep connection between Baroque and electronic aesthetics on this behalf?

Biosphere: Absolutely, I work a lot on the fragment. Even when I am in the studio, I think it is the unit of language which then develops the rest. Even in the approach to Monteverdi, I worked on the fragment, I would say even on the fragmented nature of the creative process: I worked on sound tissue sampling and processing an enormous amount of material taken from all releases, on vinyl and tape, of “Poppea” that I found on e-bay and other e-commerce sites, and that I bought from consumers around the world, especially Italian. These old records, many of them damaged by time, have provided sound materials of great interest, such as glitch, skratch, krakle, on which I built the weaving of sound performance.

Pasquale Napoliano: For this performance you don’t use neither the laptop, nor any other type of digital equipment. Is this just a functional decision or is this a sharp expressive decision?

Biosphere: I would say that is partly both. Given the complexity of the set, most of the sounds are run by the sound engineer, while I’m handling them live via analog sequencer and sinth. There were really too many sounds for me to manage them through a computer screen. But, more generally, I’m really sick of screens and mouse. I think it’s overly schematic approach, and for this reason I am trying in all ways to get rid of this canon: I prefer working with knobs, with hands on the handlebars. 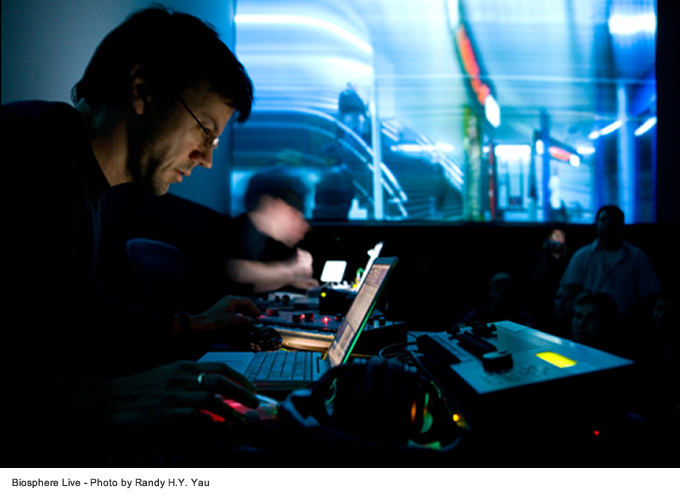 Pasquale Napoliano: Where did you come up with the idea of associating sound to the body movement?

Biosphere: The choice of working with Bjørnsgaard Prosjekt dancers, was based on mutual respect and knowledge of their work. It was my idea.

Pasquale Napoliano: About the collaborations: you have often shared your creative time with other musicians, just like you have often accompanied the work of visual artists and film makers with your sound. How do you manange this kind of sharing?

Biosphere: Again, I start from the fragment. It’s the case of works produced with artists like Pete Namlook and Higher Intelligence Agency. But mainly I’m thinking to the disc with Deathprod, released in 1998 for Rune Grammophone. I would speak about a creativity that proceeds in stages. We bounce sound ideas by mail, until we arrive at a product that satisfies all parties. Creativity in a tele-presence… 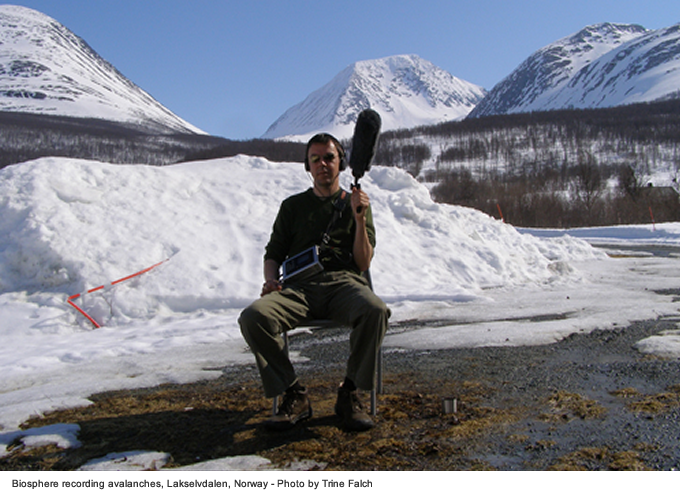 Pasquale Napoliano: In addition to recording productions, you have been working on space from many years now, as a sound-artist. Do you have a specific interest towards the spatialization of sound?

Biosphere: I’m definitely fascinated by the potentiality of sound distribution systems, like the soundtrack designed for an installation commissioned by Recombinant Media Lab in San Francisco, where I could use 500 sound speakers immersed in a room. It was particularly fascinating to see how it was possible to spatialize the sound, giving it curves, direction, acceleration and deceleration. In that case, sound was associated with many video displays, taken from inside a moving train. The sensation of movement was just fantastic, hyper-realistic.

But, in general, I’m interested in mainly the discovery of places, creating sound stories on a territory. It ‘s the case of the installation I’m most proud of: a sound space inside the caves of Bodo, Norway. Because these caves are famous for their prehistoric engravings, I decided to play these characters. Photographing and then mapping them, trying to create a strong link between sign and sound flow.

However, I especially like making CDs that will play in a normal home stereo, or even better through headphones. Not everyone has the opportunity to have home-expensive and bulky equipment for professional reproduction of sound, like 5.1 (which, I think, still has some interesting potential that I would be curious to try). So, frankly speaking, I found definitely overestimated the importance given to the aspect of sound reproduction. I want to make music that everyone can hear. 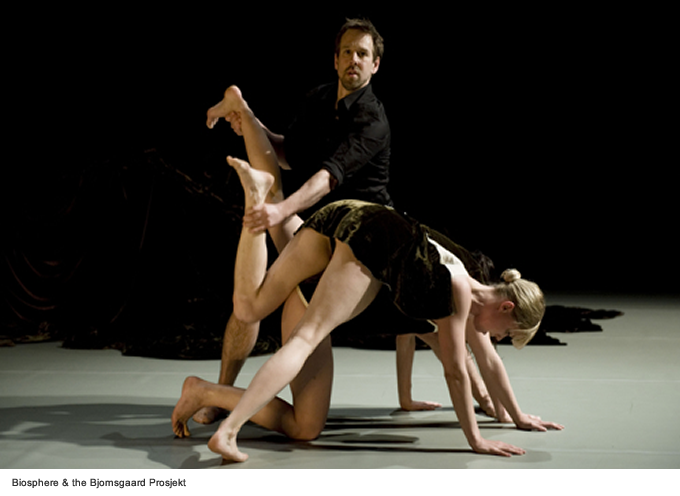 Pasquale Napoliano: A political position, definitly anti-elitist. Speaking of this point of view, what is your training, how did you face electronic music. In short, how did you become Biosphere?

Biosphere: I was born as a self-made man, as a geek. I also had no musical training in a strict sense. Rather my training is more the one of the radio dj or the record shop assistant [he smiles]. I have not had a classical musical training, like learning to read and write musical notes on the staff…. even if recently I had to make me, starting from scratch. It was in January, I wrote for the London Contemporary Orchestra, following a commission by this prestigious musical institution. I have thus transcribed from the sequencer to the staff, one of the most interesting experiences in my career.