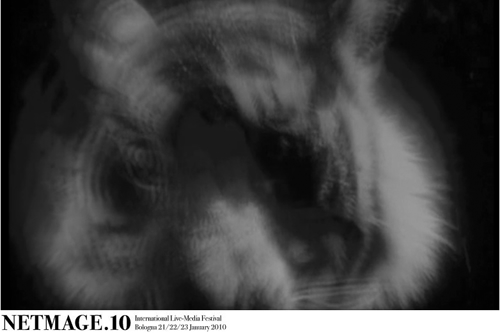 The latest edition, the tenth, of the International Festival Netmage took place some weeks ago. This edition investigated rarefied and dreamlike territories, through the choice of a deconstructive approach to music and video.

The key-image is that of transformation, of change, the element is the wake, which shows us the passage of an event without becoming temporal, but rather physical. The image of the festival, created by the Spanish Carlos Casas, is a trace of an inner journey revealed for the first time to the public, the presentation of the work in progress realised by the artist during the preparation of his latest film on the elephants’ graveyard, a sacred place which is, at the same time, an impalpable border between India and Nepal, a rarefied space. We had the chance to interview Casas on the second day of the Festival.

Carlos Casas is a filmmaker and a visual artist; his work is a crossover between documentary films, film and visual and sound arts. His last three films have been awarded prizes in prestigious international festivals such as the ones in Turin, Madrid, Buenos Aires and Mexico City. Some of his videos have been presented at collective exhibitions.

After the experience at Fabrica, , in 2001 he began a trilogy of works called The Enf Trilogy which is dedicated to the most extreme conditions of our planet, focusing on Patagonia, the Aral Sea and Siberia. Carlos Casas, who among other things is at the head of the Von Archives label together with the artist Nico Vascellari, is particularly interested in field recording and sound archives.

We ask Carlos how his interest in the elephants’ graveyards came about (the Cemetery, his latest work, was exhibited in the form of archives and history notes for the film, this year at Netmage, which also produced it). He tells us that he has always felt really curious about this place-no place.

He gives ground to it telling us that not long ago, having already started collecting material and having planned the realisation of a documentary film on this subject, he found out that such interest had roots much older than he actually thought. He had always been very attracted by the American films about the jungle and, in particular, by the final scene of Tarzan in which the protagonist and Jane are guided by an old dying elephant to this sacred and hidden place which is the graveyard of the elephants.

Classical documentary films like Grass (1925), Chang: A Drama of the Wilderness (1927) and King Kong (1933), the film adaptations of Lost World and exotic movies dating back to the 30’s, 40’s, 50’s, the golden age of adventure films, were fundamental for Casas, in his training as well as in his research.

Just as the literature of Kipling, Sanders, Milton, and Burroughs, where he sought isotopes and ideas. This part of the analysis found a place in which to express itself within Netmage 2010 with the installation Cemetery in which chunks of the classical films were reproduced by the layering of images with an overlap of the film which was broadcast on the same TV from the beginning to the end and vice versa in an unveiling of recurring symbols.

The first part of the research work by Casas also includes an iconographic section, ranging from the study of the narrative inside the cemetery, to the study of Buddhist and Hindu iconography, and their collision in the reading of death and reincarnation, in researching a mystical and ritual framework of the ceremony.

This part of the work, which contains the guidelines, the inspirations and the map for the creation of the film is the one collected in the festival program of Bologna which has been transformed into a true book of notes, released and open to the various interpretations of the audience. This thanks the choice of leaving images coming from analogical and digital photographic archives without captions and presenting them in non-linear order.

The artist explains that the archive could not be complete without the construction of a sound encyclopaedia, which could be used to guide the preparation of this road movie. Research has been done and recordings have been collected. They were joined together in the preparatory phase of the film.

Casas is very passionate about banks of sounds, field recording, symphonic collections and requiem. For Netmage, hollow spaces between one room and the other had been transformed by the artist in ethereal sound environments, places where it was possible to get in touch with the archives. He cites works by Piere Henry, Francisco Lopez, Chris Watson as key-stones to him and his production. He tells us that Watson is working with him and will implement the recording fields for the creation of The Cemetery.

The last part of the production envisages work in loco and so at this stage the author will move to India in order to observe and record, in order to map the territory searching for hidden elements of contact between man and sacred animals. In other words, for the essence of his work. He hopes Chris Watson, who worked with him on the previous trilogy, will accompany him also in this hard experience, in this journey.

The author is also working with the scholar Katy Paine, who heads the Elephant listening project at Cornell University. She has studied the communication code between elephants for years. In particular the vibrations produced by them during their death-dances. He explains that Ariel Guzik is working with him on the research on sound and that she is trying to build an instrument able to reproduce this sound, as he had worked on the sounds produced by whales while realising Hunters since the beginning of time (Siberia), the documentary on the life of whale fishermen from the Bering Sea.

Casas tells us that at first the idea of unveiling his work worried him. He felt he could almost seem boring to those who would have had to deal with all that material which does not have a definite shape. It was basically the first time for him to share his research. It also was the first time for Netmage to present the work of an artist in the form of data files, notes, audio-visual experiments, and research prior to a film in a very pure form.

Casas revealed to us that it was really exciting to show his work in progress and that now that he has opened his store he has actually figured out how the film can be continued. We are fascinated and enraptured by the magic of the jungle emanated by those sounds, by the chance to see the images that inspired him, as if we were opening a travel diary. We feel allowed to rummage in an enchanted casket, it seems we can understand how to work on the realisation of a documentary and that we can find our way in it.