Plots In The Net: Boone Oakley And Web Storytellers 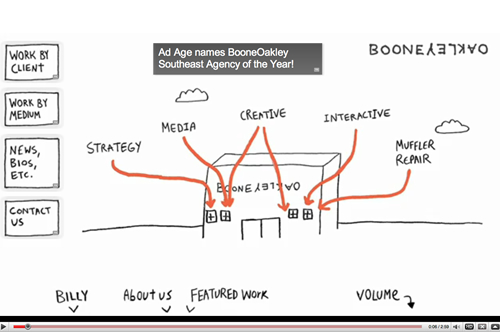 Then came video. And then came YouTube, a giant website acquired by another even more gigantic website. And there was someone who thought that a website can also be only a little story to be told after all, and that this story could give up with web pages and be listened better in a little theatre already filled with people, rahter than in a huge but desert square.

That someone is called Boone Oakley, a US advertising agency that made a revolution on the net some months ago. In fact they transformed YouTube, one of the most famous and populated sites in the world, into a real medium. From space to medium, from forum to creative grammar: the well-known platform UGC gave life to the agency’s website, giving also the possibility to substitute the web pages with vdeos linked with one another to reproduce a traditional surfing experience.

The story of this website, some kind of hyper-video mainly created with the comments function on YouTube, has already gone around our planet. Bill Allen, Interactive Director of the agency, reports it from his point of view, by answering to four questions about the Internet and surroundings.

Giulia Simi: Would you like to tell us how the project was born?

Boone Oakley: Initially we were working on some ideas for upgrading our site. It was going to be a pretty creative (yet typical) agency site. We got an excited email from one of our junior creative teams that they had an idea and wanted to talk about it ASAP. The idea was initially to put everything in one video and use the scrubber to navigate. That quickly evolved into breaking the video up into many small videos and using the annotations feature in YouTube for navigation as well as including some guide in the scrubber. We had the story of Billy pretty much figured out from the start, we just tweaked that part a little and added other parts to the rest of the site. The story and the technology turned out to be good amplifiers of each other. The annotations added some novelty and buzz but the story itself was what most people ultimately responded to.

Giulia Simi: Telling a story. It looks like it was your early driving force. Maybe because there’s no more communication without narration? And why did you priviledge YouTube to tell your story?

Boone Oakley: Narrative is what we do, it’s what a lot of great advertising has grown out of, telling a story, creating connections and relevancy. I think a lot of ad agencies struggle with interactive because they try to create widgets and gadgets and there’s a steep learning curve to creating those types of experiences. Start with what you know and grow from there. Narrative is a good entryway to the interactive realm. YouTube is full of stories and creativity. It seemed like a natural place to be.

Giulia Simi: Your work has expanded the boundaries of YouTube, and has transformed it into something more than a platform where it is possible to upload and watch videos. Do you think that YouTube has become a real medium? And what do you think of other very popular sites, as Twitter or Facebook? Can it be that the Internet has generated some products that have later developed some autonomous languages and have someway become the new media?

Boone Oakley: YouTube is doing a good job of adding features to make it more relevant and dynamic. The annotations, timeline linking, and analytics they’ve added are really superb tools, albeit simple but very, very useful. I like that a lot of the sites in the social network space are finding ways to work with each other rather than trying to set up walls where you can’t move between them. The ones that try and set up closed ecosystems are probably the ones who will have trouble surviving. Per usual some of the best uses of these spaces are pioneered by amateurs with amazing amounts of creativity and time on their hands. The MadMen fan based twitter accounts are a perfect example.

Giulia Simi: It happens that more and more often ideas which can subvert the visual and conceptual codes come from advertising rather than from art. Could we think that this is an effect of our mixing culture that makes every label obsolete? However, according to you, is it really possible to make art with advertising?

Boone Oakley:I was one of those types that migrated from the FINE art realm into the world of advertising so I have a lot of thoughts about that. But simply put, I think they are growths off the same family tree of creativity. Yes, a lot of what we do is dictated by a client, but we’re also hired by clients because they want that unique creative vision. Not terribly different from the old artist / patron model. The independent fine artist in museums are afforded the luxury of being more obscure with their meanings but they are trying to make something compelling just the same as we are.