In The Beginning Was Cybernetics. Relation Between Science & Artists 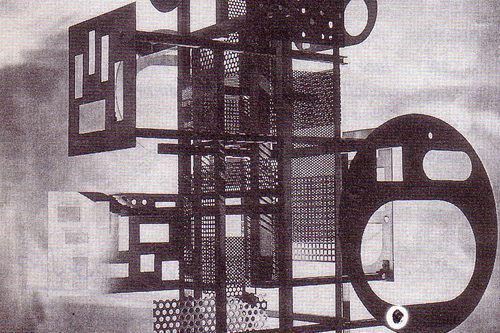 What relationship is there between digital art and cybernetic science? Surely more than one can imagine. The concept of the system, the research of process patterns, the importance of interconnections and the relationship between system and environment (be it a machine or living organism), the centrality of information, the phenomenon of retroaction and self-management, the importance of code, are the terms of cybernetic research, but it could also be said that this is true for the research of any artist who works with new technologies.

But let’s proceed in order, beginning with the scientist. In the beginning there was Norbert Wiener: that figure of a man that, whoever reads his biography would agree, can only be defined as an “authentic genius”. At 18 months he learnt the alphabet, at 3 years old he learnt to read, at 5 he had fun making declarations in Greek and Latin. At 15 he got a degree in mathematics at the University of Tufts and at 19 he was the youngest student at the University of Harvard to gain a Doctorate in Philosophy.

During his post-graduate he frequented big names in the maths and logic fields: Bertrand Russel, David Hilbert, Godfrey Harold Hardy, among the protagonists of that great underground movement that in little time would make the foundations of maths and all the correlated sciences tremble.

We’re talking about those first 30 years of the past century where everything happened at once, in a few years, through figures such as Einstein, Bohr, Heisenberg, Gödel, and we would find ourselves faced with a situation of this kind: a space-time continuum like that of the 4th dimension (Einstein), an ambiguous and unsolvable duality of matter (Bohr), an incurable uncertainty of the observed object (Heisenberg) and the impossibility of showing the coherence of any axiomatic apparel (Gödel). In other words in the eyes of a young Wiener, who is known to have not had good eyesight, but this is irrelevant, presented a frame of the state of science in terms of new research, theories, difficulties, conflicts, paradoxes and anything else that is complex. And what began to be heard, as well as the telluric noise that would bring on the “fundamental crisis”, was the need for a real knowledge restoration, just like the research for new methods and new instruments. 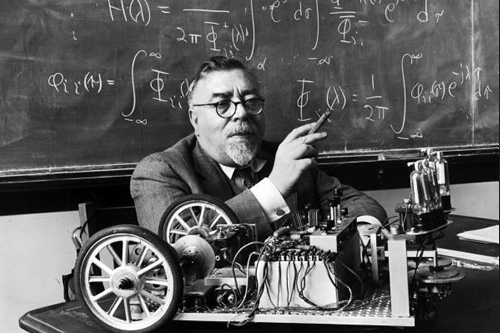 Wiener would be among the first scientists to take the challenge that accompanied the new science: Cybernetics. To call it science, using the singular term, is not so exact, as we are faced with a research project that at the time was usually interdisciplinary: the birth of cybernetics is around 1947, the year in which the fortuitous encounters held at the Macy foundation began: the Macy conferences, that saw the participation of scientists from different backgrounds.

The cybernetic project wanted to retrace the mechanisms for communication and common control of machines and animals, through an interdisciplinary approach that involved maths as well as biology, engineering, and social sciences. The title of the first meeting, just to have an immediate understanding of the themes of the cybernetic debate, was officially: Feedback Mechanisms and Circular Causal Systems in Biological and Social Systems

The interdisciplinary practice, imposed as a plan and premise in cybernetic research, was one of the first examples of a horizontal approach that we know was very successful. As was the objective that these scientists proposed: the conviction of the existence of a “process pattern” that was common to living organisms and machines, retraced through uniform research guaranteed by the use of a “synthetic” and “compartmental” method.

The possibility of reuniting the “philosophical mechanisms” as well as the criteria for the functioning of “complex autonomies” in a new theory was practiced thanks to the identification of a common phenomenon: the “phenomenon of retroaction” (feedback) and “circular causality”.

The novelty in this sense, from the point of view of a general movement in facing determined problems scientifically, was overwhelming: a fundamental mutation of the way of considering the “machine”, no longer seen in a Cartesian way like a mound of wheels and pistons, but like an “open system”, available for communication with its external environment; the practice of a new systematic approach centred first of all on the concept of “system”, which found its consolidation and its success through the General Theory of Systems by Bertalanffy published in 1968; the attention for the concept of information and communication processes, intended as essential elements to understand the “behaviour” of the system, its relationships with the environment, the relationship between the system and its parts, independently from the nature of the system, be it artificial or biological; the concept of the Net; the relationship between neural networks and binary logics; the interdisciplinary dialogue. 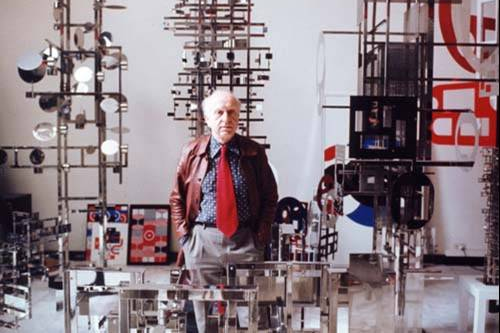 Photo courtesy by The Centre of Attention

The amalgamation of these interests and the specificity of their methods, the use of machines, the relationship made between machines and living organisms, the research that brought on the invention of the first information elaborator will be the strength of that which is, or will, by cybernetics. A discipline that Heidegger, after the announcement of the undisputed centrality of the “technique”, would define as a science capable of taking the place of philosophy. This is because of the capacity for cybernetic science to take on the task of joining and unifying the different scientific environments, the organic fields and the inorganic fields. As opposed to philosophy, as Heidegger said, the unity of these thematic fields of knowledge, when having reached cybernetics, will no longer be a unity of fundamentals but a rigorously technical unity.

Norbert Wiener will complete the meaning, the objectives, the research on new science, in his essay “Cybernetics: or Control and Communication in the Animal and the Machine” in 1948. The fascination and the direct influence of cybernetic science on artists and the artistic movements that developed mostly during the 50’s and 60’s will be very strong, passing through kinetic and programmed art, resulting in the determination of digital art. The influence of technique was not weaker, just like that of industrial robotization, but also new scientific discoveries, on avant-guard art, but this is a well-known fact.

The connections between art and cybernetics are not debated about, because the deep investigation of certain cybernetic assumptions, its research, its intersections with other fields and disciplines, can result in being indispensable in order to understand the meaning, the specificity, the state of digital art and the connection that is increasingly strong between artistic and scientific practice as well as the shared exploration of new technologies. The centrality of reflection on technique, the intersection of knowledge and genres, the abandonment of the duality between subject-object and the mimesis that favours the consideration of realities such as “structure”, “process patterns”, “strength systems”, are expressions that we can find in the abstract experiences of Bauhaus and Constructivism.

More than others, and an example in this sense, is the experience of Naum Gabo who believes that the “line is valid as a direction of static forces and their rhythms in objects”, the artist does not see the “things” but the relationship between the parts and the witnesses of this are his complex and thin sculptures, that do not represent objects but directions of forces, rhythms of relationships, a real submissive structure. 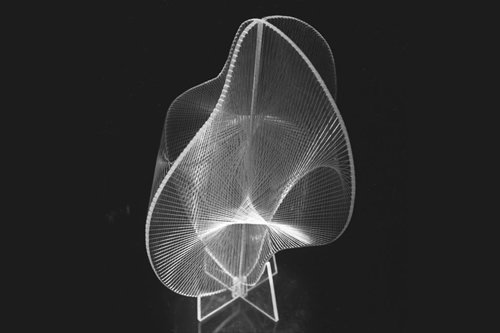 As well as Gabo, and following on with this discussion, Itten’s experience will be important for the affirmation of the importance of interdisciplinary practices, such as Tower of Fire (1919), to make an example, like he himself said would have represented the synthesis of “new constructions of the future, which will be all in one form: architecture, sculpture and painting”.

Beautiful, futuristic, feminine, we like to remember the photomontages of the Bauhaus artist Irene Hoffman that preannounce the melting pot, social relationships, the interactions between current affairs and history in the complex world of information. And certainly talking about intersections we cannot forget the experience of Hungarian Moholy-Nagy. But the more direct connections between cybernetics and artistic practice, as is easily imaginable, are determined inside the research of those artists, who were revolutionary and ahead of their time, and worked with “new technologies”, opening the way toward digital and interactive art.

A unique case at the time, and absolutely ahead of its time compared to converging research between art and technology, was Nicolas Schöffer, who declared to be referencing the cybernetic theories of Norbert Wiener when planning his work. In particular, the cybernetic concepts of systems and retroaction suggested the idea of an artistic process to Schöffer in terms of an organised system based on phenomena of circular causality and retroactive rings. It was not a coincidence that Schöffer was considered the father of cybernetic art and CYSP 1 (1956) was the first cybernetic work in the history of art.

CYSP 1 (1956) is a sculpture, in line with Schöffer’s interests, and connects light, sound and movement. The work is even bestowed with an electronic brain and a “proto software”, developed by Philips, and is presented as a dynamic sculpture in constant mutation thanks to an engine that animates the structural parts, the electric photocells and microphones that modify its state bit by bit through different lights and sounds, selected through external environmental surveys.

CYSP 1, being in line with cybernetic ideas, is an open system, capable of detecting information from the environment and mutating, as it is capable of modifying the external environment through a synaesthetic response (lights and sounds) of new information that had been detected, following a cybernetic mechanism of circular causality of retroactive rings. 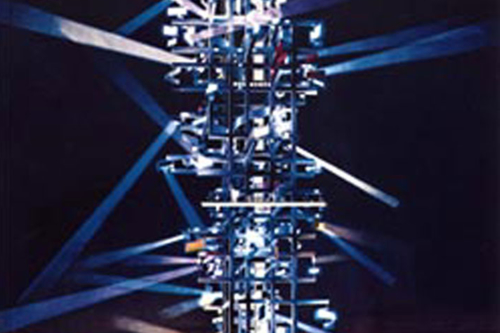 Even more complex is the work that Schöffer made in 1955 for the for the Public Work Fair at the Saint Cloud Park, along the river Seine: Spatiodynamique et Cybernétique et Sonore. The dynamic-cybernetic and sound space of 1955, with very sophisticated devices for the time (Homostat, sensors, tape recorder, electric motors), and looks like a 50m iron tower, similar to telephone receivers, made up of different levels and coloured rectangular plaques. Thanks to environmental detection devices (capable of detecting wind, humidity, light, sound, voices), the structure is capable of mutating with the environment and selecting the emission of cycles of different sounds, which were created for this occasion by Pierre Henry, a concrete music composer.

Henry recorded on a multi-track tape recorder (one of the first that existed and was produced by Philips, a company that often sponsored Schöffer’s work), recording a sound composition obtained through hitting metal plates of the tower together in 12 sound cycles that through the detection moved differently, combining differently and obtaining different melodies each time. The sculpture was sensitive to the external environment (light, humidity, sounds, people’s voices) and so gained an interactive soul, capable of receiving and giving information and mutating itself and the environment in relation to the data that had been detected and acquired.

It was the first installation capable of generating sounds in real time and the first to have sensors, devices for distance interaction. And Schöffer was one of the first cybernetic artists. It was only 1955.