Teatro A Corte 09. Art Without Borders 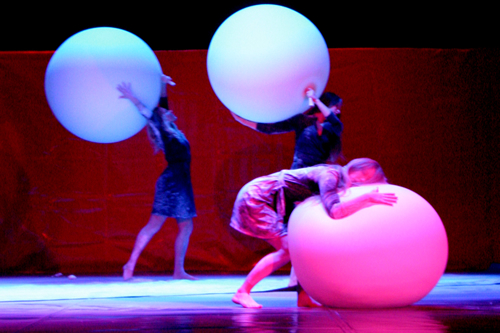 Summer time, Festival time. In this period of the year in Italy we witness an increasing and rising of close encounters with the theatre world. They can be more or less historical but these encounters are always meaningful and relevant. A new and modern Festival, which invested a lot in the contemporary art is the extraordinary “Teatro A Corte” (Court Theatre), this year at its third edition. This festival is well known and qualified from all points of view and has always put the integration of arts and the enhancement of territory in the center of its activity.

Directed by Beppe Navello, it is the Festival par excellence, where the best of the European scene – with international shows and various ways of expression – meet in Turin and in seven Savoy residences (Residenze Sabaude) in Piemont from the 10th to the 26th of July 2009. Exactly the relationship between the contemporary theatre and the Savoy residences is the heart of the festival, since it transforms the simple attending to a theatral representation into a unique and unrepeatable experience, fruit of the encounter between artists, architectures and public in a really unusual atmosphere. The Festival was created in fact with the aim of opening a window on the European culture overcoming the borders between arts and presenting theatre, dance, contemporary circus, equestrian, physical and buskers’ theatre, installations, figure theatre, vertical dance and above all in situ performances, with projects planned and realized expressly for the festival and in harmony with the spaces and places hosting them.

Among the 6 in situ creations, the absolute first one which best represents the European spirir of the Court Theatre is Flux, an equestrian theatre signed by the French Théâtre du Centaure. Also the contemporary circus troupe 9.81 comes from France and it creates Coléomur, a show which weaves vertical dance with live music and videoprojections in a moving work of art, moving on the red thread of the relationship between man, space and architectures. The Dutch Judith Nab uses new technologies in her environment installation titled All the people I didn’t. It is a pathway for 40 spectators immersed in an atmosphere between reality and immagination, through videos, sounds and images reflected on a big mirror creating a visual theatre without actors or script.

The French choreographer Daniel Larrieu produced Marche, danses de verdure, an unusual “choregraphic experience of the landscape”, in which he leads the public to the rediscovery of the relationship with nature. Cooking is instead the strong point of La bonne voie / Le banquet committed to the famous transalpine group Ilotopie, whose password is “shortening the distances” between artists and public. Last but not least the comeback of Jérôme Thomas, one of the most original exponent of the French nouveau cirque, refined inventor of juggleries and manipulation of objects, who created Untitled #1, a short performance in the hall of the Museo d’Arte Contemporanea (Contemporary Arts Museum) in Rivoli, which hosts also Olafur Eliasson‘s installation The sun has no money.

Two German groups will have the honour of opening and closing the Festival “Teatro a Corte 2009”. The figure theatre of the well-known group Familie Flöz has been committed with the initial show Hotel Paradiso, a fascinating noir adventure. The closing event has been instead committed to one of the most cheered German group of buskers, Pan.optikum, presenting a show of great impact titled “Il Corso” featuring 25 trublers, musicians and actors among fireworks and stage machineries that will transform the open space in a huge stage. The word “theatre” is the protagonist in 4 national premières with Anna Galiena who dedicates her show titled Cavour vs resto del mondo precisely to Camillo Cavour, Lucilla Giagnoni’s project Big Bang, and the Austrian authoress and dramatist Elfriede Jelinek’s show directed by Lorenzo Fontana and interpreted by Roberta Cortese titled Sport. Una pièce – II studio.

Finally, since Teatro a Corte has become, among others, producer of the project Nuove

Sensibilità, created to enhance and support young artists, it established for this year edition a special section hosting the six winner shows and a recommended one. The first national première will be Maguy Marin‘s choreographies with Worstward Ho, featuring on the stage Françoise Leick and Samuel Beckett’s scripts as well as Tatiana Baganova‘s ones with Post Engagement. Diptych. Part I and II. A great impact is given by Anima, the work made in UK signed by the company Tmesis Theatre. Melanie Munt is coming instead from Belgium with two national premières, Petit Pulse and Itinèraire as well as Compagnie Furiosas directed by Carmen Blanco Principal, Thierry Salmon’s assistant, with Slipping.

Twenty-four among clowns, trumplers, jugglers and musicians will be the protagonists of the first national première of Trasmudas, circo transumante mediterraneo, (Italian transhumant circus).

It is a show of contemporary circus presented by Progetti Carpe Diem e Festival di Montevecchio. Young talents from the nouveau cirque will be the protagonists of the first national première with two schools in comparison: the Italian school “Scuola di Cirko Vertigo” in No place and the French school Chapitel Aleïkoum in Sortout le cadre. Katharsis is a piece of vocal theatre played by Laboratorio Permanente di Ricerca sull’Arte dell’Attore (permanent laboratory of research on the art of acting).

Onda teatro will instead present the performance SMS Short Mobile Sequences . There will be also two performances linked to music and cinema: the Spanish David Moreno performing in Floten tecles and MusicARTeatro in Shortrip – a multimedial concert which reproduces the soundtracks of some classic dumb cinemas. I have recently got in contact with the Director Beppe Navello who despite his many organizational appointments, managed with patience and accuracy to spare me some time to answer some of my questions regarding the Festival and its collateral events.

Massimo Schiavoni: Could you please tell me something about the relationship between Teatro a Corte and the main European Festivals and the theatral scenarios in Italy and above all in Piemont?

Beppe Navello: Teatro a Corte is the natural evolution of a more restrained event that I have been directing for 9 years in Turin, i.e. the festival Teatro Europeo (European theatre) which gave birth to an international look and a net of collaborations that are nowadays widely developed starting from Teatro di Gap (thanks to this theatre we realized interesting coproductions). Also with the Festival delle Colline Torinesi we have started this year an important coproduction, which involves a local association called Associazione 15febbraio. Last year during Teatro a Corte we organized a meeting, “L’Europa nella rete” (Europe in the net) inviting the European festivals and the associations to come to Turin, in order to create a “net”. We spent two busy days with operators and journalists focussing on the structures of In SITU and LIEUX PUBLICS and on the festivals Les Hivernales in Avignone, the London Mime Festival, the Tanec Praha, Les Brigittines di Bruxelles and the Agence Wallonie Bruxelles.

We will repeat the positive experience of that meeting this year too, with two intense meetings full of guests: on the 25th of July there will be a focus titled “il Piemonte dei festival” (Piemont of festivals) during which many of the cultural and festival organization of Turin and Piemont will meet and tell about their own experiences of international cooperation and action on the territory. On the 26th of July the focus will be instead “l’Europa dei festival” (Europe of festivals) and the attention will concentrate especially on European groups which create “in situ” or “site specific” productions. It is also one of the main features of Teatro a Corte, which gathers many artists in order to create works of art ad hoc for the places and architectures of Savoy residences.

Massimo Schiavoni: I would like to dwell exactly on the relation between artists and the local people, architectures and site specific productions among pathways and “steering” which are well presented in Judith Nab’s and Daniel Larrieu’s works. Do you think the public should be in any way newly involved through a direct contact or more or less evident interaction?

Beppe Navello: “In situ” or “site specific” creations are the vibrant heart of Teatro a Corte which creates unique and unrepeateble relations between spaces and architectures in the Savoy residences in Turin and the activity of international artists working in close contact with the heritage where our festival takes place. The result is the real difference which makes Teatro a Corte almost unique because people can share the emotion of magic nights in august places belonging to the past which are open to the public and host events telling their story in an exceptional way.

Is therefore the interweaving of different kinds of art and their relation with the territory, following the English model of total theatre, the key and objective perspective needed for the renewal and restructuring of many Italian festivals in this artistic sector?

We have been following a vocation cultivated for years and born with the festival Teatro Europeo. We have been following passion and instict and since the beginning we have been fascinated by the overcoming of the borders between arts. One of our slogans is in fact “without borders”. We like bringing to our public the best of the European scene, in all its forms, from theatre to dance and physical theatre, from the nouveau to the equestrian circus from figure theatre to pantomime, from fireworks to bulkers’ shows.

We travel during the year following the programs of festivals and theatre all over Europe in order to host great artists who however are not always known by our Italian public. During these travels we established interesting relationships with many structures. Surely we found many affinities with the prestigious and historic festival Mime Festival in London, which expresses an idea of show well summarized by the English critics in the concept of Total Theatre, overcoming the borders between arts to include everything in a single expressive framework.

Massimo Schiavoni: Teatro a Corte 2009 has come this year to its third edition. What are the expectations and ambitions of this event which is so polyhedric but at the same time compatible with every kind of public going from physical theatre to street art, from performances to installations?

Beppe Navello: Teatro a Corte was founded thanks to the agreements between State and Region which allowed us to raise our experience and establish this important festival that unify the valorization of the architectural and historical heritage of Savoy residences in Piemont with the art of live theatre at international level. However the agreement will last only three years and this is exactly the third edition. Given the success of the festival from the point of view both of public and press we hope that it could continue in the future as a model of an European idea of culture, which has been always appreciated by spectators.