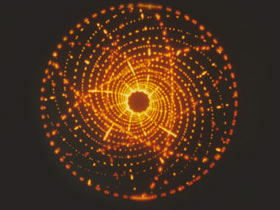 The idea that music and moving images were somehow connected dates back to Newton . But it is especially starting from the 1900s, and with experimental cinema, video and digital arts in the latest decades, that Visual Music (that is rendering music through images, mainly abstract ones), has developed considerably.

The decidedly temporal dimension of music and video, seems to naturally tie these two media, and makes for endless experiments and combinations, from pure abstractism to more figurative patterns. The 2009 Visual Music Marathon, which took place in the Visual Arts Theatre in New York , presented a panorama of 64 videos selected among more than 300 works from 33 countries, together with historical videos, and two groups managed by Larry Cuba of the Iota Center and Bruce Wands of the School of Visual Arts di New York .

The history of practices linked to the synesthesia between music and video, was explored through seminal works by Hans Richter, Mary Ellen Bute, Oskar Fischinger, Norman McLaren, Hy Hirsh, Robert Breer, John Whitney e Len Lye. Many of these artists begun with pictorial experiences (Richter e Fischinger, in the first decades of 1900, but also Robert Breer in the 1950s), incorporated new media (Mary Ellen Bute with photography and mixed media, or Norman McLaren with drawings on film), or experimented with new technologies (John Whitney, considered the father of computer graphics), in order to create video products whose main point was symbiosis with music.

Visual Music, a Gesamtkunstwerk (a total work of art, as offered to the world by Richard Wagner almost 3 centuries ago) that unites visual arts and music, had existed for 3 centuries in many different forms. Isaac Newton, in his book Opticks from 1704, observed that the proportions between the light waves of the spectrum and the different lengths of strings necessary to produce specific notes, were similar. This created an interest in a new technique called music of colors, and later Bainbridge Bishop e Alexander Wallace Rimington, 2 inventors from the 1800s, created the organ in color.

In the 20th century, Thomas Wildred conducted a research on light as a form of art through the “Lumia”, compositions of light and color, made of lenses, prisms and gel changing slowly through time, also taking them to the scene in concerts in 1924/25. Among the pioneers, we cannot forget Oskar Fischinger, who included the physical act of painting, and John e James Whitney, who brought visual music in the computer age.

Since quality software is becoming as accessible as brushes and colors, bohemians and more expert artists are considered in the same way as professional animators, entering this way the arena of visual music. Progresses and accessibility of audiovisual technology, and the increase of communication means on the Net, are rapidly expanding this domain, leaving lots of freedom to the creative organization of a contemporary exposition like Visual Music Marathon.

The visual music field also comprises of movies, dance, traditional arts and animation. Many established artists of this sector, expose their works not only in museums, but also in dance clubs, and their works are also used in pop music videos and videogames. To better understand, experiment and evaluate this quickly rising technique, we have to look ant visual music through the magnifying glass of theory, history and terminology of already established subjects like music (of all genres), traditional arts, dance and movies.

The festival of contemporary videos particularly focused on the most recent, experimental, non-narrative and abstract works, where one of the fundamental elements is surely the digital factor, the use of software to “tie in” visual experiences to music. But it is not the only one: visual music, like video-arts in general, merges expressive modes of the other media, like the already mentioned painting, but also dance, animation, and of course film.

So, in a full immersion which lasted a day, the huge and overwhelming variety of visual music was analyzed through the most varied works, where especially computer graphics renders with images, colors and shapes the rhythms, melodies, harmonies, movements and improvisation of music

Simon Gulet with his delicate synthetic flourishes, Scott Pagano with his mathematical abstractisms, Dennis Miller and his vibrant membranes of colors, Robert Seidel with his expressionist naturalism, are only some of the artists who explored Visual Music in a personal way during this festival, who traced an experimental path, blending natural shapes and algorithms, tradition of the past and tension for what has not yet been expressed.