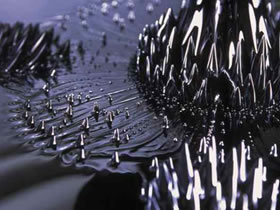 “Machines and Souls”, an extremely well chosen title for an exhibition that is really worth visiting.

Housed by the National Museum “Centro de Arte Reina Sofía” in Madrid till 13 October 2008, the great “Máquinas y Almas” exhibition investigates the points of intersection in which science and art have met during their respective routes in the last decade. By exploring the relationship between art and the other spaces of generation of knowledge and by showing how the one can be put into the service of the other in the search for beauty, the exhibition in Madrid reveals how imagination and creativity manage, after all, to shorten (or even eliminate) the distance between the digital sector and emotion.

Behind the scenes of this event, there are Montxo Algora and José Luis de Vicente, both commissioners who are linked to ArtFutura and interested in the development of the new art in the international field.

In the rich website that is devoted to the exhibition, Albert Einstein is quoted: “The fairest thing we can experience is the mysterious. It is the fundamental emotion which stands at the cradle of true art and true science” . And, in fact, some of the presented works seem to cross over into magic, playing with the conceptual possibilities, given by that hybrid territory where all of the technological disciplines and the necessity to re-interpret a world in a rapid aesthetic and social transformation, to reproduce life and intelligence, to redefine identity, intimacy, property and collaboration converge.

In the room A1 in the Sabatini building, the spectators that already know the history of media can quickly pass, just for the respect for the organisation. As a matter of fact, there are works that are now “old” (such as the very “draft” 3D model of Pierre Huyghe’s “One Million Kingdoms” of 2001 or the instrument of data visualization “On Translation: Social Networks” by Antoni Muntadas of 2006), projects that are more interesting in the course of their development than in an exhibition (like the documentary archive on zexe.net, by Antoni Abad), too naïve works (like Vuk Cosic’s animated paintings), others that are too (or even exclusively) scientific (like Natalie Jeremijenko and Ángel Borrego’s “UrbanSpaceStation”) and others that are almost annoying (such as Harun Farocki’s “Deep Play”, which starts from an interesting concept, but applies it by using no less than a football match).

However, you should not discourage. “Ampliación” on the first floor has in store very pleasant surprises. When you enter, you are welcomed by a hypnotic video, whose protagonist is a metallic liquid. Behind the thin wall, there are, in the flesh, the beautiful ferrofluid sculptures by Sachiko Kodama, animated by magnets and algorithms. It is a dance of drops and translucent protrusions, that develop, rotate, melt, dissolve, brave gravity, react in the presence of spectators, who can modify them with their voice. Simply beautiful.

And this is just the beginning. Going on, spectators are bewitched by the magic light effects by British artist Paul Friedlander: “The Enigma of Light, Spinors, Wave Function” and “Abstract Cosmology” (this original work was specially created for “Máquinas y Almas”). He is an artist and scientist, who graduated in physics and mathematics, and makes light a mouldable substance, managing to do that very well. If the world were dominated by more creative than commercial necessities, in all of the living-rooms, in place of the old hearth, instead of a television there would be a work like his. No photographs, no descriptions, no videos can tell the beauty of these kinetic sculptures, which are composed also by sounds and aleatory projections.

The route continues with an installation by talented Madrilenian Daniel Canogar. All his work is focused on the alteration to the traditional photo size and it aims at overwhelming the public with a series of images to change their identity in the space of the show. Here “Palimpsesto” is presented; it is a wall of bulbs that are illuminated by a projected light, reproducing the spectator’s silhouette.

Emotions continue with three “interactive mirrors” by Israeli industrial designer (interviewed by Marco Mancuso for May 2006 issue 14 of “Digimag”  http://www.digicult.it/digimag/article.asp?id=353) Daniel Rozin: “Circles Mirror”, “Weave Mirror” and “Trash Mirror”. They are kinetic sculptures that modify in the presence of the spectator, thanks to video cameras, different kinds of engines and materials, including rubbish. Complex apparatuses ending in clean, simple, elegant and amusing interfaces.

In an exhibition that is so interested in the technosocial realities of contemporaneity, a work that based its contents on the Web 2.0 could not but be there. And here is the “Listening Post” installation by Ben Rubin and Mark Hansen, which has received many prizes and allows you to listen to fragments of conversations from Internet chatrooms. It has an aesthetic that is typical of the old monitors with green phosphorus, a careful sonorisation which makes use also of the sounds of the LEDs modifying the fonts (Ben Rubin is a sound artist with a very interesting career), the elegant, simple and fascinating design of the 231 screens hanging in the air turns simple, ordinary, banal, nice, silly, desperate, human sentences into poetry.

If you continue in the intriguing experience of the works on exhibition, you will meet, among the others, a curious exploration in the world of robotics by great David Byrne. It is certainly well-known for his original music production, as a soloist or as the leader of the group Talking Heads, but maybe only few people know that, for many years, Byrne has been devoting himself to multidisciplinary explorations, in the field of photography and interactive installations. Unfortunately, the work that is on exhibition here, “Song for Julio”, an installation that was created starting from David Hanson’s robot, which is able to reproduce mouth movements and face expressions, by synchronizing itself with voice recordings, when the editorial staff of Digicult had the pleasure of visiting the exhibition, was not working. However, for those who want to know more about it, the artist’s website, which is rich in photos and videos, is worth a visit.

Among the artists that are represented in the exhibition, two great artists deserve to be mentioned: the former is John Maeda, who certainly does not need any introduction. “Máquinas y Almas” exhibits seven “moving pictures”, which form “Nature”; they are works of abstract expressionism, digital landscapes that are created by a generative software, developed by the artist himself.

The latter is Dutch artist Theo Jansen with his now well-known and beautiful “Artifauna”. Unfortunately, the incredible animal species in continuous evolution, created by him with poor materials like electricity tubes, plastic bands, strings and nylon sheets, needs, to be seen alive, a very particular habitat, that is, wet sand, much room and wind. For this reason, the exhibition only exhibited motionless specimens, that allowed, however, to examine their complex structure, and a video describing their history and functioning.

The aspects that were more evident during the visit of the exhibition are the progressive change in the role of the computer, a more and more hidden or even absent element (or used only at the planning stage, like in Theo Jansen’s work), and the increasing return to organicity. The row materials to be moulded (or re-created) are more and more often natural elements, objects and materials from daily life, what allows us to live or something we produce and then we throw away, feelings, evolution, (investigated in a new way, re-discovered, re-created), communication, collaborative creation, the fusion between the work and its user under the artist’s alluring look.

Works become entities, beings, with their own behaviours, with their own forms of intelligence, with the ability to change, to grow, to invent, to create, to relate, apparently also to hear. Machines with a soul.