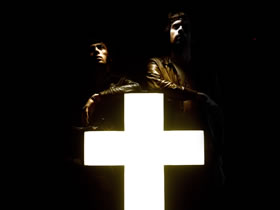 The presence of Spain at Sònar 2008 is very important, with a third of the music schedule presenting more than ninety artists including composers, DJs and producers.

At the centre of the festival there is also a tribute to the creative advertising communication on the Internet, from the fake to the self-promotion through MySpace. Starting from the coordinate image of Sònar 2008, conceived at first as a series of short amateur videos in which strange genetic experiments are filmed, in a mysterious place, by mixing animals and talking human heads; the anonymous broadcast of the videos on YouTube and through a false website caused an incredible response with hundreds of thousands of hits in few hours.

The three days of the festival will offer, as always, a comprehensive panorama of the international scene and of the favourite trends of electronic music, by focusing on the latest development of Eurodance and the fiesta , with a lot of surprises for the most curious people.

Among the famous artists there are Pan Sonic, Clark, Matmos, Goldfrapp, Jeff Mills, M.I.A., Róisín Murphy, Soulwax, Chloé, Frankie Knuckles, Hercules and Love Affair, and Kalabrese; among the most interesting groups there is the Spanish group Q’AA, who presents psychedelic atmospheres with long drones of guitar, bass and pedals, or aggressive pieces of noise and guitar saturations, accompanied by the disconnected rhythmics of the drums. Cabo San Roque with their musica a maquina usually perform in costume within improbable sets made up of toys, washing-machines, tracks for toy cars, aquariums and strange sound pieces, creating romantic sounds and borderline. They are very original and often indefinable during their concerts and they play unconventional, alcoholic, melodramatic and, at the same time, enjoyable music, which reminds us of the atmosphere of the circus and of less known Pink Floyd.

Those who love improvised music will try to listen to the Aixsònoéspànic, a Spanish group consisting of electric clarinet, drums and samplers for the radical improvisation characterized by avant-garde, free-jazz and psychedelic nuances. Coh  Ivan Pavlov/Raster Noton  will give an obsessive and very original live performance on the frontier between musique concrète and IDM, whereas Iranian-English musician Lelia Arab (that Bjork’s fans certainly already know) will present her third performance as a solo singer, which will be early available on Warp Records. The string quintet Basquiat Strings from London  violins, viola, cello and double bass  will present to the Auditorium a hybrid of modal and classic harmonies, accompanied by jazz rhythmics. Electronic tendencies, 8-bit music and music from the Eighties characterize the duo Spectrum Orchestra, who plays and projects with terrific Sinclair.

New sounds and approaches are often the result of the fusion of different music genres and styles, like it happens for the delicate, original and bucolic influences of Jahbitat, for the vaguely glamour sound of Christopher D Ashley, who mix pop, IDM and dark music, till Diplo’s sound pastiche , who mixes everything in full freedom and with irony. Among the showcases, Emily Records will present Arbol, a Spanish producer of digital sounds and organic rhythms, characterized by a minimal and refined approach, while Edbangers will confirm the French dance-rock style with Busy P, Krazy Baldhead, Nil and Sebastian; Justice, instead, will perform in the larger spaces at Sònar de Noche.

Following a general trend of this solar year (from the conferences during the Cimatics festival in Brussels to the most important issues of the Sonic Acts festival in Amsterdam, of which Digicult was media partner), also the exhibition area of Sonar (Sonarmatica, Sonar Cinema and Sonarama) will be devoted to a critical analysis of the development of contemporary audiovisual and multimedia culture, basing on the interactions and experiences of the cinema of last century.

As a matter of fact, Sonarmatica will present the “Future Past Cinema” exhibition, which deals with the opportunities that the re-use of pre-cinematographic techniques in the field of art and new media can offer. This exhibition (which exhibits works of Marnix De Nijs, Juliene Maire, Julian Oliver) will present a selection of installations and performances that re-use some of the essential elements of the analogue cinema, such as zoetropes and cinéoramas. On show there are also some of the pioneer machines and devices for a view of the nineteenth century, which are part of Tomàs Mallol’s collection.

Sonarama, the festival area in Santa Monica Art Centre, will explore the potentialities of light and sound as elements that are both cinematic and synaesthetic. Light and Sound will present the audiovisual works of Edwin Van Der Heide, Mark Fell, Pablo Valbuena and the group Sonom.

Finally, as every year, the Auditorium of the CCCB will present, during the day, Sonarcinema, with audiovisual creations ranging from video art to experimental cinema, from music videos to animations, till fiction documentary films.

We from Digicult, as a media partner, will be there, so you will know more about the festival in the summer July/August issue of “Digimag” with a detailed report of the event.