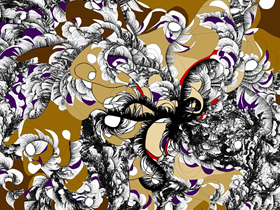 Well-known writer Philip K. Dick used the word “android” in opposition to the expression “human” as metaphor, not to identify artificial entities.

In his reflection on human nature, Dick guesses the impossibility to accept a pure definition of the living as opposite to non-living. He’s therefore convinced that the human being cannot be anymore defined in relation to ontology, but only to its way of being into the world. His book are filled up with creatures that, human from the biological point, have an android soul, in the sense that they are not able to experience any kind of feeling.

The writer, during one of his speculations, ask himself how a sophisticated intelligent machine can be negated to humanity, in the moment that it interrupts its habitual occupations to come to our rescue. In this case, he answers: “You’ll end up attributing, plenty of gratitude, a human character that the analysis of its transistors and relays would proclaim impossible”. Therefore, he ends: “A scientist that would search between the circuits of that machine the source of such a human being, wouldn’t be different from one of our serious scientist that, after trying to locate soul in men, unable to individuate a specific organ in a specific position, would regret the thesis according to whom we have a soul”. This reflection seems lighting how the ability to feel emotions, in this case the noble piety of being in a spot, is the characteristic that distinct man from other human beings. In this prerogative, Dick identifies the immaterial principle of soul.

Lots of people think that his portrays of human beings will turn Dick’s book into an immoral work. His characters are actually the precise opposite of super-heroes of the classical science fiction. They’re heroes in an unusual way, that is they’re heroes not for their strength or cunning, but rather because they demonstrate one of the most noble human emotion – compassion, even if they fight with psychic illness, poverty, drogues and pervasive institutions. Human beings have the ability to feel compassion for their fellows, but they also develop emotions such as love, even for completely different creatures. It is everyday experience to see a human talking with its dog; in fact humans tend to give anthropomorphic characters to their animals. We as human being also have the ability to let ourselves being emotively involved into events that happen to fictitious identities, a character of a book or a movie protagonist, even empathize with them at the point that we cry.

This is a prerogative of the human being. It’s able to project a part of itself on everything it has experienced through its senses, even unanimated can put on strong emotional merits. Anyway, even if today lots of organic rights are recognized, when the man out in the street thinks about a hypothetical intelligent machine, it happens in a purely opportunistic way. A man sees an entity provided with artificial intelligence as an instrument that eliminates some everyday duties rather than achieving a bigger control on the entire world.

It is something similar to the old vision of animals. Before the invention of the internal combustion engine, horses were the middle to keep efficient to draw carts. The technological evolution allowed the changing of the point of view towards the animal world, which was once more related with our everyday works. Hypothesizing a future where the synthesis of all foods inside laboratory is reality, it’s not so difficult to imagine how inhabitants of this hypothetic world would find creatures in a completely different way.

This new perception of the living creatures has already been started. In fact, it is not important being conscious of all the processes beside meat we buy at the mall. The fact that our technological instruments make us experiment a higher control on nature allowed the vision of nature and many animals as resource to preserve, not as menace. As we didn’t experiment a satisfying interaction with A.I., this is still considered vaguely dangerous for our specie. This fear is deep-rooted in our culture and proved by the majority of the 20 th century science fiction. Sometime mass media, taking advantage of interests and fears of the society, tends to provoke clamor around researches about A.I.

Often, computers are talked as being so intelligent to be able to beat every human being in a chess match, but something must be explained about this intelligence. Computers are nothing but translators of signs in some other signs depending on whom they can interpret a question and give a pertinent answer. We can imagine that someday, due to their more and more sophistication, computers will develop a form of knowledge. As in principle a neuron can be simulated with convenient math functions and the human brain nothing is but a huge number of neurons, it is possible that the physical structure of brain is reproducible or can somehow be emulated by computers.

If knowledge, as consciousness of the self and own actions, nothing is but a product of our mental processes, that correspond to electro-chemical stimulation produced by the activation of neurons, we are authorized to think that the knowledge can be generated inside a machine as well. Anyway, considering our actual skills, imagine the situation is kind of hard, or better impossible. What actually astonishes is how human conscience could start from a simple, even if complex, system of electronic signals transmission.

The imagine of an artificial intelligence that emulates all the characteristics of our brains, even overtake all the human abilities, well that imagine usually evokes irritation rather than enthusiasm.

The eventuality that calculators can do better than assist our intelligence is translated in the wrong conviction that such a technical sophistication would turn human into nits. Is like if human, as animal in pre-technological époques, would be considered only as an instrument to be valued for physical and mental features. As relevant questions to create a really intelligent machine are not only the power of calculation, but also speed, memory or their assembling, but human have faculties that cannot be reproduced such as the consciousness of the self, we can only suppose one day the world will be populated also by those kind of artificial entities. Anyway, even if androids still not exist, no one forbids an ideal jump to project in a future scene where A.I. is reality.

Marshall McLuhan thinks it is possible through art to foresee the psychic and social consequences of the actual and future technologies. When this extraordinary intuition turn into an ambitious objective, it generates an open work where the public can spontaneously create the artistic, process and dynamic event, experimenting contexts of real interaction between organic and inorganic. It constitutes the most appropriate modality to develop an inedited form of empathy toward machines, delineating a type of approach to A.I. more equilibrated and rational.

The sense of the installation is actively built through the body action of the participants to this collaborative experience. This type of work wants to support the contact with the machine and the artwork itself, following the modalities the public will judge as the best ones. The work will turn into a personal path and concretely offer the chance to live free the relation with the artificial entity.