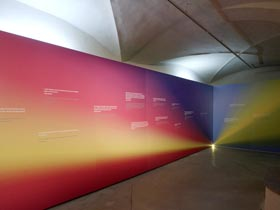 “Emotional Systems – Contemporary Art between Emotion and Reason” is the first exhibition of CCCS (Centro per la Cultura Contemporanea Strozzina – Centre for Contemporary Culture Strozzina) – as revealed by the name a part of the Fondazione Strozzi in Florence .

In a context such as Florence and Tuscany in general, where contemporary culture has to struggle against a centuries-long artistic tradition, the CCCS (together with other events like the Festival della Creatività , the Biennale d’Arte Contemporanea , and the recent opening of the Museo della Fotografia Fratelli Alinari ) seems to make some space for the debate on contemporary art in Tuscany’s main city, otherwise bound to become one of the many splendid – and petrified – museum-cities.

The first exhibition focuses on the relationship between artist, “work of art” and spectator, and contribute to the recent debate started by the discovery of a new class of neurons, the so-called “mirror neurons”, which seem to activate inside the human brain whenever an action is made, witnessed or thought about. This very discovery, made by a group of researchers of the University of Parma between the 1980s and the 1990s, gave birth to a new discipline called neuroaesthetics, actively involving scientists and researchers in the humanistic field in an interdisciplinary debate which is worth a closer look.

Franziska Nori, Project Director of the CCCS and curator of the exhibition (together with Martin Steinhoff) has talked with us about this topic and the way the centre is going to be curated in the future.

Giula Simi: CCCS, Centre for Contemporary Culture Strozzina. I’d like to start by asking you not only about what made the project possible but also about the intentions and the motives behind the activities of the centre. By choosing the term culture rather than art , the centre seems to state a precise difference. Contemporary Culture rather than Contemporary Art . Shall we consider this as a will to include a wider (and interdisciplinary) glance which may be the only way to try and interpret the contemporary age?

Franziska Nori: The Centro di Cultura Contemporanea Strozzina (CCCS) is part of the Palazzo Strozzi Foundation. It was born as a cultural project which united both public and private efforts: the Florence City Council, the Province of Florence , the Chamber of Commerce of Florence, and a wide number of private citizens, brought together by the Palazzo Strozzi Partners association. The Foundation is ruled by a board which decides the course of action and a board of directors. The CCCS aims at being an open platform for the wide range of approaches and practices in the production of contemporary art and culture. “Open” means that the cultural mediation is not aimed at developing one single interpretation, but at boosting the culture of free debate and being able to read through the many layers the complex and sometimes apparently contradictory reality we live in is made of.

Giula Simi: “Emotional Systems – Contemporary Art between Emotion and Reason” is the first exhibition for the centre. Including video art, poetry, net-art and monumental installations it takes part in the recent debate on neuroasthetics, a new-born science which tries to make space for the dialogue between scientists and researchers in the humanistic field on the comprehension and description of human nature. What is your point of view as curator of the exhibition? Where did the idea come from, also as far as the artists’ choice is concerned?

Franziska Nori: The aim of Sistemi Emotivi is to attempt a critical reading of the relationship between artists, works of art and spectators, keeping an eye on the most recent discoveries in the field related to the human brain and emotions. The choice of the authors and the thesis they support wants to be an exhortation to consider under a different perspective “what” creates the experience and the quality of the experience itself in the context of a confrontation between the spectator and the work of art. The path develops through the different rooms of the Centre for Contemporary Culture Strozzina, presenting contemporary artists who, both consciously and unconsciously, deal with body and sense practice, but also with the rational and cognitive parts of emotions, both in the production and the fruition of art. The focus of the exhibition is to offer a wide, non all-inclusive perspective. The installations work according to different purposes. Finally, their aim is the cognitive understanding which goes beyond the meaning of emotive experience.

Giula Simi: The relationship between the creation and fruition of the work of art is the centre of this exhibition. Recent scientific discoveries draw a direct line between action and perception, also inspiring the exhibition, and giving a new value to Arnheim’s statement according to which “all observation is also invention” . In such a perspective, the dialogue between artist and spectator gets closer as well. What do you think is the role of the curator, someone who builds the fruition context and therefore intervenes in the flow from the artist to the work of art to the spectator?

Franziska Nori: I think the curator should act as a mediator between the artistic production, the state of the international debate and the spectators. Starting from the CCCS and the line it will follow for the next two years, the aim is to choose and present a series of projects which deal with themes and phenomena relevant for our culture and society. In such a perspective, choosing a theme rather than another actually means to determine what the audience is going to see. Since some of the choices are made by single individuals (in spite of the fact that they’re organized in workgroups) and are therefore subjective, it is fair to make these choices public, so to fuel the debate and contribute to the dialectic cultural process.

In this way the choice of the works, the way they are arranged and the way the space is presented are visual languages which translate different possibilities of interpretation. The story of exhibition design, that is, the tradition of theories on the presentation of art – from the Wunderkammer to art salons of the end of the XIX century, from the exhibition projects of the avant-gardes in the 1920s to the White Cube , including site-specific art and art in public places – teaches us that a curator, as well as an artist, can configure all the elements of an exhibition process, thus having an influence on the perception and on the possible way the spectator is going to read the work of art.

Giula Simi: Lectures, readings and performances have taken place during the exhibition, involving artists and philosophers, art historians and scientists willing to connect theory with practice. Do you think this is a good way to bring the general audience closer to contemporary art, often rejected because thought at as being difficult to understand?

Franziska Nori: With the decision to invite theoricians and researchers in different fields together with poets and artists to make weekly presentations, CCCS has stated that the present cultural debate cannot be fully carried out without considering all branches of art, science and human sciences. We live in a global and complex reality which we cannot fully understand due to a lack of specific knowledge. Opening up to different studies is a key factor to develop methods and criteria to understand and face contemporary culture. In this sense the choice of the CCCS to be a centre for contemporary CULTURE rather than contemporary ART originates from the fact that all disciplines need to be put in constant communication, in order to develop visions for a possible future – a role that may be covered by artists.

Giula Simi: A final comment on Florence , art city, often accused to be anchored to tradition and to ignore contemporary art. CCCS seems a very good starting point. How did the audience react to its first exhibition, and how do you see the future of the city?

Franziska Nori: I think I can say that until now the CCCS has been welcomed. Florence , as all art cities in Italy , is undoubtedly linked to its past. Still, there are a lot of groups dedicated to contemporary art and culture in Florence . The future plans of CCCS include a constant enlargement of collaborations, in order to become a platform for meeting and exchanges between local and international networks.