Who Is Afraid Of The Dark? 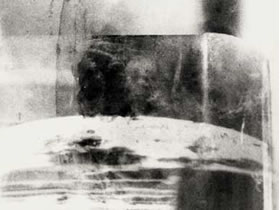 Composer, performer and sound installer, John Duncan is a rare example of those artists who have always been totally engrossed in existential research and for more than twenty years has been a pivotal figure for radical experimentation.

His long and varied career, characterized by electroacustic intensity and performative art events, goes through the results of his rigorous researches in the most different topics and settings (arcane, metaphysical, transgressive).

Duncan creates his work as an energy catalyst, and through his work he tries and encourage the audience to participate in the process of research and self-discovery. This interview took place in Palermo, and not by chance on the occasion of a performance-concert for four channels “surround sound”. The audience floats immersed in the deepest and absolute dark, so as to amplify their sense perception which involves not only music but also the a-dimensional atmosphere created to obtain a deeper involvement.

This completes in a certain sense the interview Silvia Bianchi made for Digimag some time ago ( http://www.digicult.it/digimag/article.asp?id=717 ) in order to deeply understand the incredible artistic universe of the American artist John Duncan (who was born in 1953 in Wichita, Kansas, but has been living in Italy for a couple of years). He grew up with the performing art and studied with Allan Kaprow, later focusing on extreme realities such as that of pornography. In his record production we find relations with science and energy; the artist breaks the matter to reveal its structure, to analyze the character of its elements and find the essence of the substance itself, privileging the work on short waves.

Claudia Moriniello: You are an eclectic artist and by ranging from sound to videos and artistic performances you are one of the few left who is immersed in existential research. What are the fields of your researches?

John Duncan: I’m very interested in existance, in all its forms, in terms of being alive. For this reason I push the limits forward, to catch what is unconscius and latent in all of us.

Claudia Moriniello: Both your electroacustic work and your performances show a transgressive and mysterious personality which is never wholly revealed. What’s the border between what you express and the part you do not because it is private?

John Duncan: No, that empy space, that not expressed part of my soul, is not a limit. Moreover, I learned to use my soul as a gnerative power and as material

Claudia Moriniello: So, what is that is left for you only and kept inside you?

Claudia Moriniello: If we consider artistic creation an inner urge that screams because it wants to show, what happen once it is born?

John Duncan: In my experience, it comes from outside. From where exactly, is a part of the reasearch, I really don’t know. In any case, it developes its existence indipendently by me. As all of us, it has its own bad and beautiful aspects, sometimes in extremis …

Claudia Moriniello: In your hands sound becomes physical and real and the body is attacked and hit. Through the perception of sounds the senses drift until they become flat and liquid; then they disappear by evaporating. The bdy empties, disappears, becomes air. From physics to metaphysics: are they really so close?

John Duncan: I don’t know. Everyone lives his own existence, according to the listener, to his serendipity, his behaviour, his freedom and limits.

Claudia Moriniello: Your works have often a subtle, desecrating and provocative theatrical component. You always drag your audience into a sense vortex and often you involve them physically too. Why?

John Duncan: To meet me on the half of the creative process. Every time the audience have to decide to accept or not the rules to be part of the creative process, as entering in a completely dark room totally naked, this decision become part of the process and of the art. IF you decide to accept, art and experience continue and develope. If you don’t accept, that decision reflects a personal limit, but it is art as well.

Claudia Moriniello: So the other has in any case an important role in your creative process?

John Duncan: First of all, it becomes the creative process for the other. My process and my role work only as a unique energies catalist

Claudia Moriniello: So your work is a channel, a means to reach a higher, detached, free condition…

John Duncan: This is the intention, to supply and to be an instrument.

Claudia Moriniello: It often happens that you push the user to a sense overexposure through light or sound. Are those the means or the goal?

Claudia Moriniello: What does the word “synergy” remind you?

Claudia Moriniello: What is darkness for you? Is it a dimension, a condition, or what else?

John Duncan: It is the lack of continuous distraction, a rare luxury, like the silnce after a noises overload.

Claudia Moriniello: What do you expect or what would you wish to receive from those who come and see your performances and/or concerts?

John Duncan: Attention, with an open mind. If my works deserve it…