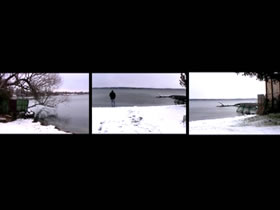 I had the chance to know part of the interesting work of the Israeli artists Liora Belford e Ido Govrin on the occasion of the Experimental Intermedia Festival in New York. What aroused my curiosity was their approach which, though experimental in its nature, tends to create more relaxed and less aggressive atmospheres than those of other Israeli artists I knew before.

The Israeli experimental artists I knew shared the use of energy to the highest degree, a strong political and social commitment (we all know the historical tensions in Israel) and wanted to stress the substantial break and their independence from Western art rules in every aspects, from music to figurative arts. When I talked with them I tried to understand that “difference” and beside that, I found out that behind their work as a duo an interesting activity which has seemingly no borders conceals…

Domenico Sciajno: When I saw your performance I noticed a different approach from that of other experimental Israeli artists I met before: more space for reflection and constructive thoughts rather than explicit and aggressive accusation. Is it possible to find a relation between that approach and a new trend towards socio-cultural topics in a nation like Israel which has always been known for its harsh and extreme contrasts? Or is it a peculiar characteristic related to your own personal aesthetics?

Liora Belford e Ido Govrin: We believe that life (and art as part of it) should be taken in a specific way (at least most of the time) which involves listening, reflecting, slowly progressing among the rest, a way to live and to make art that contradict the way Israel is being pictured to the world (and to itself).

It’s true, Israel is a very aggressive place, very hectic which normally contradict such an approach we’re taking, but this dissonance between the approaches leads interesting ideas and/or art works. One could stand against such an approach (and we sometimes hear this criticism) by saying that this is a pure escapism. To that we answer – being Israelian artists doesn’t mean we immediately must follow the political game, hence, create political art. The fact that Israel is such an extreme place as far as politics goes, makes it very hard for artists of our kind to even start dealing with it… it doesn’t mean that we’re totally neglecting the political side in our art, but when we do make a “political work” we do it our own way. For example, our audio/visual installation called Island, which deals with that specific question of legitimacy of the non political art in Israel. Island deals with an alternative reality, processing the world out side the gallery as being an isolated space made by its own rules. While recording the video and audio outside the gallery, we were approached by a security guard who asked us questions about our means of course we integrated this conversation in our final work and so even when you’re trying to avoid politics, its constantly blowing at your back. It is very ‘easy’ to be a political artist in Israel and to act according to the moral/artistic codes of such social group, but finding artists that deal with politics the other way around is quite hard.

Also, one must realize that today’s young generation of Israelis (people between the ages of lets say 18-30) don’t follow up blindly with the earlier generation ideas of Zionism, nationalism and patriotism for instance. By that, they do have other interests in life rather than war or politics.

Domenico Sciajno: Since you belong to the new generation, do you find it easier to understand what is around you?

Liora Belford e Ido Govrin: No, we’re afraid it isn’t easier on the individual level, we think every generation has its own problems to deal with and uncertainty adolescence phases to overcome and so do we. On top of that, the current Israeli/Jewish situation makes it even harder, as fundamental and essential values/conceptions of the past are being seriously questioned towards alternative local and historical identity.

Domenico Sciajno: I see you freely turn from experimental art (usually not very easy and comfortable) to interior design with the idea of making a space comfortable for people while they are shopping or spending their spare time. How do you reconcile those opposites? Do you use a “radical switch” or is it just reorganizing the same material and ideas according to the given situation?

Liora Belford e Ido Govrin: Indeed we work on both platforms which we guess you can clearly distinguish between them on most level of life and creation but the line sometimes is thinner than we think. The creation of our art is an isolated and purely process, hence, allowing us to do solely what we want, which leads to experimentalism. On the ‘other’ platform, which we can call it the commercial platform [or our day job, the story is obviously different  there, we have a framework were we need to act by our client’s rules, with the need to fulfill their will, and even though we try to broaden that framework as much as possible, sometimes you just have to accept the needs of others. For example, those video structures, designs for interiors you mentioned, we did for this fashion house  on that project we needed to support a comfortable shopping experience and to remember the fact that people need to buy the goods at the end of the day, and so we worked different then on our art. Nonetheless, we hope the consumer experience was a bit shadowed by an additional dimension, hopefully intelligent, of our works which acts as a double agent  a critic on one hand and alternative exhibitor on the other hand.

Domenico Sciajno: At this point it would be important to know something about your specific backgrounds and your real area of artistic research

Liora Belford e Ido Govrin: Liora studied film and television at Hadasa College and scriptwriting at Sem Spigel film school in Jerusalem. Her background also involves a significant period of painting and sculpturing. Ido studied social work, film and scriptwriting on several institutions but dropped them all. At later times, he studied (and finished) sonology and sound studies in the royal conservatorium in the Netherlands. Nowadays, he is finishing his B.A in philosophy.

Domenico Sciajno: It is thus thank to Duprass project that you are able to put your peculiarities (sound and image). Have you got a specific method to develop your audiovisual works?

Liora Belford e Ido Govrin: Together, we investigate the aesthetic approach by deconstructing the audio-visual narrative using the max/msp/jitter software and implement it in various modes; sound/video art, cross media installations and live performances. Our creation of art is strongly leaning to the aesthetics of minimalism, abstraction, restrained gestures and compassion while introducing utopian art arenas where experimentalism is the core issue.

Domenico Sciajno: Apart from your artistic and personal activity, you are also involved in the spread of new music and audiovisual products throughout Israel: you own a record label, you organize a festival and other activities…can you tell something about those activities and how people react to that?

Liora Belford e Ido Govrin: We run Interval Recordings which was founded in 2003, named after the famous mathematical and conceptual notion of the interval; a space between objects, time between two events or a difference in pitch between tones. The label interested in the gap between objects, the idea of silence, the love for the uncharted terrains that comes before and after the notes. Searching that area which is the limbo: somewhere between the death and the living. The aesthetic idea behind Interval Recordings, as the name indicates, is to bridge the gap over different polarities existing, both in music and mind, a concept which lead towards coherent sonic spectrum and an interesting cultural environment. As you can imagine, this is an indie label per-se, means, keeping everything at low level (budget wise) but at the same time there’s absolutely no compromise on the art, design and packaging of our releases maybe this is the reason why we released only 3 albums until now As for ‘Laptopia’ Festival; ‘Laptopia’ is Interval’s annual experimental art festival combining audio-visual performances, installations and new media works.

The aim of ‘Laptopia’ is to expose the local audience to current international experimental art and to broaden the ideas network. Many great artists took part in this festival during the 3 years of its establishment. The territory reacts very well for the festival at present time. We started this project because we felt a strong need for that kind of art in Israel and also we wanted to integrate the work of foreign artists with local ones.