Peer Production: The Wealth Of Networks 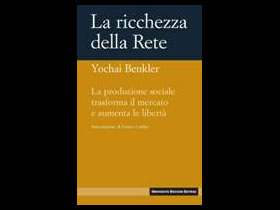 “A moment of opportunity and challenge” that is how Yochai Benkler‘s book begins . In Italy “The wealth of networks” was published by Egea a couple of months ago but can be downloaded from the site www.omniacommunia.org as well.

The aim of the book is to describe the mechanisms which are deranging information and knowledge production starting from the use of technology and of the net and its cooperation strategies in particular. Still, Benkler is aware of what is going on around him and makes a challenge: he knows a legal battle will be fought in the next ten years to define the ecology of digital environment which will lead to the redefinition of content production as well as of the rights concerning them. Benkler’s thesis is very simple yet accurate: starting from an economic approach, he claims new cooperation processes on line are threatening the industrial model on which the cultural production was based all XX century long.

Through the whole book Benkler clearly compares industrial information economy and the emerging networked information economy . When economists refer to information and culture they are perfectly aware they are not talking about a car or a tuna can. They are non-rival goods, that is to say goods which can be used again and again without reducing their availability; once you produce them, you can reproduce them again and again with no marginal cost.

It is thus clear that if a large number of people can reproduce goods thanks to the spreading of digital technologies and knock down prices thanks to the net, then there are the sufficient conditions to give birth to new ways of knowledge production. In this respect Benkler outlines some profiles which define two different production strategies: on the one hand the romantic maximizer , amusingly called mickey, bases his production on exclusive-rights-based business; on the other the scholarly lawyer , referring to Lessig ‘s arguments and Creative Commons ‘ models, gives up exclusive rights, aware that commercial production is shifting from information to consultancy and the services related to it.

Actually Benkler outlines a third model called Joe Einstein , which is the most interesting element of his thought. Benkler wants to emphasize that, the decrease in costs and the easy availability to knowledge is leading to sharing and cooperating behaviour rather than commercial production. To explain it he refers to examples such as kernel linux model, wikipedia or even more peculiar situations such as slashdot.com community , underlining the dynamics according to which it is possibile to build systems which can spread relevant, authentic and authoritative. Benkler is greatly attracted to this emerging and absolutely peculiar phenomenon of our times and considers it much more effective than commercial production.

These processes are causing wide and deep changes, which are also linked to the huge and ever-increasing group of people who spread culture for non-commercial reasons, such as amateurs and well-financed non-profit organizations. “If, beside these innovations, we consider that in the most advanced economies information, culture and knowledge have become the main activities with a high surplus value, it is evident that we are experiencing a social and economic condition without precedents. Social behaviours which were traditionally neglected in capitalistic economy have now become fundamental elements in advanced economies. Non-commercial behaviours are becoming extremely significant for information and culture production. Culture sources, which outline our idea of the world, have radically changed, shifting from a strong reliance on commercial media concentration to a more widespread model which is based on many different people who are not driven by imperatives such advertising or entertainment goods sale.”

This process leads to the strengthening of the concept of autonomy, both meant as action ability and cooperation with other people. It is based on the access to information goods which are perceived as common goods, as well as on the ability to distribute them horizontally and to organize know-how and intervention, that is to say p eer production (aiming at dignifying that peer to peer technical expression which has been often criticized). Those are the two basic concepts about which no law has been created to both let it develop and protect it. The construction of this ecology and legal culture is the current battle field on which industrial production and the so called “peer production” are fighting.

Today two different solutions seem possibile: the Lessig’s continuous licence and authorization on the one hand, or the opening towards the social practices of sharing based on free access to commons as Benkler hopes on the other. We won’t simply watch what is going to happen, we will be part of the conflict, whether we like it or not.