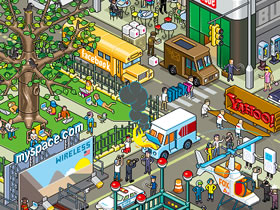 Prometheus fire has been a turning point for human life. At the same time, this brought problems to human race, that, for the theft to Gods, was condemned to live in a sad existential condition. The fire has been a technological innovation at that time, that we learned to dominate and use as instrument. Surely, Prometheus myth doesn’t touch our minds on when we turn on our stove!

During the most recent contemporaneous, Roland Barthes warned us once again: every new human invention will be reset to ground zero of our nature. It’s still necessary to pay attention to collateral effects. If man creates a technological artefact and uses for its own aim, it inevitably ends up absorbing it in its own everyday life and it is de-formed from it. It is the unstoppable course that cultural undergo because of our osmotic relation with technology, because of reciprocal influence, generating a circular relationship between mental behaviour and cultural artefact.

Every change is a challenge and man always put to use strategies of adaptation and cultural selection. Matter of conservation of the specie and surviving of the civilization. Matter of linguistic evolution and decoding of a reality more and more mediated by technology. We often create instruments that slip from our control, and this is the case of the digital universe that more and more affect and engrave our lives. So maybe it is the moment to talk about it.

During the last weekend of 30 th and 31 st May, Virtueel Platform of Amsterdam launched an SOS to protect and develop our cultural system. This Dutch institute that deal with e-culture from a decade knows that naturalize culture means making efforts and that it is necessary to ask questions and put to use some strategies to avoid dirty trick. Cultuur 2.0 is the name of the international conference-workshop where business, politic, cultural and artistic sectors speakers have been invited to discuss about the health of the knowledge diffusion in the telematic ecosystem.

The 2.0 web structure meets the cultural institutions one: and here’s the species evolution. Cultuur 2.0 focused on how the internet application of last generation and new practices generated from it are applicable to the cultural sector, and it asked if those application represent or otherwise a menace to culture organization and quality.

Sharing, classify, exchanging information and again review, sort, structure knowledge are now cognitive habits that allow to interact and contribute the collective architecture that social network, blog and wiki words allow to build. Wikipedia is an example for everyone: once created a platform in which all the users can insert, modify and classify contents, the connective material grows automatically and autonomously. But the horizontalness of the participative culture, creates enthusiasm on one side, but concern on the other.

About the argument, Charles Leadbeater and Andrew Keen, two of the event guest, presented different vision. The first one is enthusiast of the offered Web 2.0 potential: social networking and mass creativity represent the access key for a participative society where spectator means critic protagonist in first line. This is the argument of We-think: the power of mass creativity, a sort of meta-book that experiment new form of intellectual participation and creative collaboration both in theory and in practice.

The official publication is fixed for next year, while drafts of this project are available for everyone who’d like to correct, enrich or shoot them down. The principal objective of this editorial project is to analyze new possible forms of alternative organization that opposes to the consumerist-capitalist logic.

Andrew Keen, founder of aftertv.com, is one of the most critical voices of the choir and, despite his presence at Cultuur 2.0 only through an interview, he awaken lots of attention with his sharp affirmations.

From his point of view, Web 2.0 offers the biggest illusion of the digital utopia, the one that allows everyone to be journalist, writer and film maker, feeding the narcissistic needs of everyone’s ego. He said that a free and indiscriminate participation of bricoleurs of culture, instead of contributing the growth of knowledge, create confusion and insert false information in the Net. How can we distinguish angels from devils?

How can we structure the knowledge system not to turn into monkeys of a disinformation jungle? In his new book The Cult of the Amateur, Keen doesn’t give solutions, but announce the imminent catastrophe: internet will destroy us. As Frankenstein that escape from the lab, the body of the creature is deforming and turning into something unknown, composed by shreds of different organism in mutation. It gives back an image in which we must mirror ourselves. There’s confusion, but if you see a monster, please post a comment.