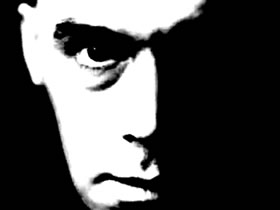 Something Like Seeing in the Dark is the title of world premiere sonic performance, realized especially for Netmage 07 by John Duncan e Leif Elggren. John Duncan, American by origin, though stateless resident of countless countries (over six years in Japan, six months in Sweden, more than a decade in Italy, while maintaining citizenship in the strange kingdom of Elgaland-Vargaland) distills his experiences in ways that go far beyond the limits of sound-art.

Leif Elggren, active since the late 1970’s, has as well as Duncan become one of the most constantly surprising conceptual artists to work in the combined worlds of audio and image. A writer, visual artist, stage performer and composer, he has many albums to his credit, solo and with Kent Tankred, The Sons of God, on labels such as Ash International, Touch, Radium and his own Firework Edition. Together with artist Carl Michael von Hausswolff , he is a founder of the Kingdoms of Elgaland-Vargaland where he enjoys the title of king. The work of this rigorous pre-Artic avant-garde constitutes the nucleus of an unforgettable intervention at the 2001 Biennale Arte di Venezia’s Nordic Pavillion.

Silvia Bianchi: The title of your Netmage Production is “SOMETHING LIKE SEEING IN THE DARK”. How have you worked on the canonic sense of vision to enlarge the sensorial limits?

John Duncan: We’ve interwoven live voice, computer-generated audio and multi-screen video for this live event, testing these experiments on ourselves and the audience.

Silvia Bianchi: In your long carrier in the field of music experimentation how has the relation between music and visual changed? Which is actually you relationship with the Live Media as performing art?

John Duncan: The machines for generating and reproducing them have changed, and the technology is reflected in the result. Beyond that we’re still as human as ever, driven by the same needs, haunted by the same ghosts as our ancestors. So the work continues to be based on this constant as it continues from one generation through the next.

Silvia Bianchi: The concept of seeing in the dark is important to improve a concept of the vision that goes over its usual meaning and that is concerned particularly with feelings and sensations. How do you work to make music working as a universal language in this performance?

John Duncan: By using ourselves as test subjects. If the work affects us both in ways that we intend and in others we don’t expect, it will affect others as well. Some sooner, others later.

Silvia Bianchi: How was the collaboration between you and Leif Elggren born?

John Duncan: Leif and I have known each other since the early 1990’s, performing at the same events a number of times, giving each other technical support on various solo projects over the past several years. SOMETHING LIKE SEEING IN THE DARK will be our first actual collaboration, an event we’ve been looking forward to doing for quite awhile.

Silvia Bianchi: I know you’re both citizens of Elgaland-Vargaland. Could you tell me something more about these Royal Kindoms?

John Duncan: Although I’m officially a king with a title (King John the First) as well as the Minister of Change, Leif as one of the founders would be more qualified to respond to this.

Leif Elggren: Sure, one of the concepts of Elgaland-Vargaland is the promotion of breaking down global political criminality (that is: most of all present political structure) and economical centralisation (that is: nearly all present economical functions) by propaganda, infiltration and idealism. Do it your own way, but only if you want to.- We are all born equal to this planet and have the right to our lives and the selfevident right to grow and prosper. In the world of today the unjustice situation is increasing all over. Most people on planet Earth are living like slaves and a few is ruling. This is by tradition a conventional fact in the history of mankind. Nevertheless it´s important to strike back.

As Citizens of The Kingdoms of Elgaland-Vargaland, we are immortal. We are all encouraged by this gift and basic privilege, we can all use it as a powerful tool and a fantastic opportunity to overcome and use fear, feelings of worthlessness and inferiority as well as hubris, megalomania and blind joy. To grow in reciprocal care and become those holy individuals we are meant to be.

On the base of these principles on 27th of May 1992 at 12 noon, we proclaimed the state of Elgaland-Vargaland. Before that day, on the 14th of October 1991 a meeting had taken place in Stockholm , Sweden , between Carl Michael von Hausswolff and Leif Elggren. The event resulted in an agreement to establish a new country as a work of art. On the 14th of March 1992 the world was informed of the possibilities of citizenship through an advertisment in the largest Swedish daily newspaper, Dagens Nyheter. On the 27th of May 1992 at 12 noon, the state of Elgaland-Vargaland was proclaimed at the KREV embassy, Andréhn-Schiptjenko gallery in Stockholm , Sweden.