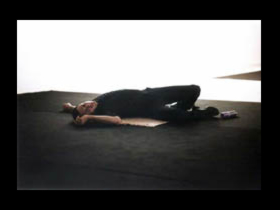 We’ll have to wait the next 23rd November before some Japanese not only full of eastern popular traditions but also opened to the new western world in the Beijing of the new cultural, multi-ethnical and multi-social winds, can admire the less conventional but more surprising work of the Florentine group Kinkaleri.

We’ll have to wait the “Italian year in China” event and enter in the Oriental Pioneer theatre to value and confirm the not often respected in homeland talents in order to find the only place where we can stay: – UBU prize in 2002 for the best performance of theaterdance of the year. Outside the schemes of the dramaturgy from the gender archetypes, outside the unspeakable and the undeniable, we can find us inside a performance between comedy and the drop of the same, between pure sarcasm and pure loneliness, between obsessively coordinated choreography and the absence  essence of the horizontal scene as a pure stable point. We are beyond the subject, beyond the word and the looks, beyond the daily and the delight for the codes and the conventions, beyond the theatre, what remains? Nothing if not the already seen and the already assimilated.

We are beyond the wall, the scenic one, made of details and memory. We are beyond the wall of the aesthetic and the so-called autonomy contemporary of the art, beyond the Chinese wall as a metaphor that is redundant but functional, heavy and old in the collective vision but transfigurable, what is enough, to understand, to arrive, and to cross the borders of the mise en scene.

The scene is filled for more than an hour from comings and goings, from ballets and gymnastic elements, from walks and silences, from immobilized falls. I could say it was slowly organized and mathematically probed. There were laughs and freeze-frame in the audience, which decides the path. It was an active multiplier as a human recorder keeping in memory songs from the headsets, drinks and food, the laying of a cover and the staging of a tent. And again: white sauce, cans of honey to throw up, packs of flour for artificial explosions, scotch tape to stay in balance and, who knows, to seem like dead people. And then biscuits, ovaltine, cream cake, cans of beer, milk and tuna, crossroads and one-way to mark the way of our civility.

Kinkaleri was born in 1995 as grouping of formats and poised tools in the pursuit. Matteo Bambi, Luca Camilletti, Massimo Conti, Marco Mazzoni, Gina Monaco, Cristina Rizzo meet their experiences and precedent studies in various domains, with the intention to realize specific projects, requesting so the will to work with concrete ideas and always caring all the aspects necessary to the creation of their activity: programming, ideation, dramaturgy, distribution and management. The kinkaleri’s works received hospitality in many hybrid programs, finding an important recognition on the Italian and above all global scenery of research.

Debuted at the Studio Theatre in Scandici, from 16 th to 23 rd January 2003, after a series of studies presented at the Gallery of contemporary Art in Bologna within the Festival Non Io, at the Fabbricana theatre in Prato, at the Festival Primavera of the theatres of Castrovillari as well as at the international Festival in Polverigi, Paris and Batofar.

Kinkalery say: ” is empty, the only place where we can stay, wait, see, lift head, see the aeroplanes and point them. It can explode in worldwide telecast. This isn’t a subject. We have no words; we can avoid the bewildered look of my cat. Rather than representation of the memory, trusts the mechanisms of logic association tied with the representation, creating in who is seeing a series of processes which must connect different plans and heights. The recalled memory therefore is the memory that the public, who has to associate, recognize, catalogue, confuse, decides to use. Let’s imagine as a overlapping of transparent layers where what was marked before from a finished action can remain on the visible scene and also in pause.

Then the same objects, or the memory of finished actions, can be picked up again for a new use or to reconnect and bring to a conclusion an action left hanging previously, reversing what before happened on other communication levels. In substance each object and each action revolving vortically round themselves becoming each time different signs multiplying the mechanisms of the language and of the communication. The space in its shape is a direct expression of the relationship which ties the scene and the audience where we loose the limits of those who create the event.

A space path and signed by hatchings of independent actions strictly tied each other up to be perceived as a unity, by a linear time and by the finished associations. The show could end after the first fall; the remaining is a note at the foot of the page. In everything had been already seen, assimilated as part of our daily habitat of imaginary and rhythm: for example the songs which from the headset provide the sound basics and are part of an hypothetical compilation of tracks which everybody knows and recognizes as signs of their own personal and collective time. Nothing is revealed, nothing is proposed as a reflection on the new because the contemporary mechanism of signs elaboration shows the failure of the human constructions to avoid its nature. He prefers always the copy to the original, jumbles of the memory of the subject who sees, elaborates, recognizes, places, reassures, dies, revives as inexorability of a human condition of infinite loneliness which thinks to avoid us only reproducing just like that.

Was not built starting from the humour, or better what is considered as amusement or laugh is a remainder comparable to what come back after having bought something. If in we laugh this happens in the tragedy of recognizing in that segments of not finished action a condition of what had been already seen by our civilization. It is the limit of human things and of the world. The presence, the obscenity of that act, the pornography of the look whose lives in it. The described path, the components of the result, produces those little unspeakable miracles due to casual coincidences.

The truths of a miraculous poem hide only in the pitiless vision of an idea. The creation itself suggests the idea of the crime; the criminal with their act without a project are the real artists and a concept is created on the empty scene in the flotation of the findings which unveil the tracks of unlikely acts. Seeing a body which acts on itself is the result of that effort and we believe that if that gesture had been inverted to pitiless essence it would be a miracle.