Theare Of Art And Ardor 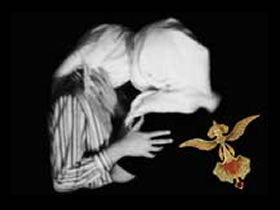 Recent guests at the Festival delle Colline Torinesi , Fanny & Alexander is not only an experimental theatre company. They are actors, writers, performers, photographers, video makers. A pair that stand out for volatility and goliardicity, certainly from the decidedly brainy features. Born in Ravenna in 1992 out of the artistic union of Luigi de Angelis and Chiara Lagani, Fanny & Alexander have activated a group of forty events between theatre shows, photographic installations, performances, extensions, cinematographic and video productions. Since 1999 photographer Enrico Fedrigoli has collaborated with them, too.

Brought to the attention of the public and the critics for their projects, Romeo and Giulietta (1999), Requiem (2001), Alice vietato > di 18 anni , Ada and Familiar chronicles, they are distinguished for their omnivorous use of whatever expressive means, the language, the technology, the media or the instrumentations. To define them only theatre does not give merit to their creative steak: photographs, videos, speaking objects, sounds outside field, a twisted love for linguistic games (anagrams, charades, puzzles) which are the main ingredients they put into their shows. The topics are stolen from the world of infancy and to its means: a schizoid childhood and its premature collapse.

Both the choice of their name, and like so the literary titles from which their works are freely drawn, the colours, the settings, the scenery, testify their obsessive attention. The name Fanny & Alexander resumes the title of one of last films of the great director Ingmar Bergman , that speaks, not by chance, about two young adolescents, who are at hands with the abrupt interruption of their youth.

Like so Alice vietato > di 18 anni , taken from the novel by Lewis Carroll , as the same Chiara Lagani describes it, ” it is an impeccable structure of terror and fantasy”. Subjective scenery and narrative device as a deformed projection of the main character that merges dream and truth. It is the mania of childhood that guides the vision of Alice . A childhood read in its delirious omnipotence, enemy and deceptiveness. The saga Ada , Cronache familiare, the parameters are inspired by the vicissitude of the two siblings Ada and Van, and their incestuous relationship, during their life, narrated by Russian writer Nabokov in the novel Ada or Ardore. The Heliogabalus , last plan of the pair faces the paradox of the reigning adolescent: roman emperor Mark Aurelio Antonio, inundated by the cult of the sun El-Galab, called to govern at 14 years old and murdered at 18 by his preTauruses . A hallucinating story that had already stuck the fantasy of Antonin Artaud.

But this, although nodal, is only one of the lines of research of the speleologists, always on the tracks, enlarged by the blown-up scenery, of slight post-modern perversions of the nevrosis: love and its other side, an exhibited pornography, morbid and patinated, the terror of the fairytale, the amnesia of the fragment. Reminding one their work, in taste and shades, that defined literary tendency ‘ 90’s such as nevro-romanticism . But this is only one notation.

Beyond the determined character of their themes, what strikes you is their methodology, nomadic, always in fairs, multi-shaped, that finds in its scenic frame only one of the many possible solutions. Video installations, continuous textual comments and enrichments to the drama that is renewed time after time, musical performances, a photographic documentation that becomes the same narration, conferences, makes the work of Fanny & Alexander come to life, a magma that is expanded into a thousand streams.

Ada, Cronache familiari , almost represented in its entirety at the Turinese festival, is a free re-visitation of the story Ada and Ardore by Nabokov. Subdivided in eight pieces or “dwellings”, the work puts on stage, in episodes, varies topical moments of the story, not tied up by chronological order and narratively autonomous. The six episodes, in “first absolute” put on stage in Turin in a unique path: the shows Marine Aqua, Ardis I, Ardis II, and Vaniada , made up of a constellation of videoinstallazioni Villa Venus and Lucinda Museum, in their debut. But not only. Added to all of this is the photographic exhibition by Enrico Fedrigoli and the presentation of the two publications: a book game and Ada, romanzo per enigmi in 7 dimore , (Ada, novel for enigmas in 7 dwellings,) composed of enigmas, word games, charades that re-propose the dynamics and the ins and outs of theatrical work.