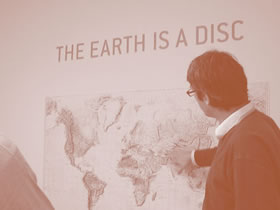 From 15 to 17 June the first floor of CCCB in Barcelona gave hospitality to Sonarmatica , section of digital culture and projects of critical and creative use of the new media from Sonar festival, that this year had as subtitle Always On . That means: the culture of mobile communication and projects based on the idea of resort, with some of the interactive most accessible applications of the digital scene, thought for a stage build with streets and public spaces that express most of all through the participation of the public.

It doesn’t astonish if in this context there’s an original figure such as Jens Brand . We don’t know much about him: composer, musician, audiovisual artist and “cultural agitator” of German nationality. The majority of his installations are also sounded and the majority of his compositions consider the image as important as the sound. His concerts, performances and installations are site-specific and often based on logical but absurd plays between the public and the artist. With his original experiments, Brand during last years exhibited all over the Europe, and then in Cuba, Botswana, Japan and U.S.

In Barcelona Brand presented the Global Player , work conceived in 2004. Apparently a normal CD/Mp3 player, except for the fact that instead of normal supports, plays our Globe. The G-Player or g-Pod knows the position of more than a thousand satellites and allows us, with a 3D model of the planet, to listen a virtual track of a flying object in real time.

So it is possible to select a satellite on the menu and the device will analyze real time the topographic profile of the region that its flying over with the possibility to determine the position of almost 1.000 official satellite. The simulation of orbital path and the relevance of the distance between the satellite and the different sites of the region produces above unsuspected sounds, almost infinite. From the silence of the oceans to the high frequencies of the plains to the bass of the mountainous areas. An authentic satellites concerts.

The device does nothing but showing the name, the type, the height and the position of the satellite selected over the Earth (latitude and longitude) and transpose a huge variety of data and positions sometime contradictory. The g-Pod becomes an odd device or a generator of an audio experience quite interesting, but can be also interpreted as a socio-political metaphor. We then tried to ask some question to Jens Brand on his work, but not on.

Miriam Petruzzelli: I think your g-Pod is an extremely poetic work. Which relation do you think exist between poetry and technology in your work? How much does technology influence your creative work?

Jens Brand: Its a complicate and confusing subject, as i am not so sure that i know what poetical means or poetic is and (what it is not). The player to me is not a piece of technology but a combination of signes, words and gestures. There are leaflets explaining things and advertisement like sentences, suggesting directions of intention. Also the technology of the Gplayer is language based. Its programming language, but similar to a music score, even this language can be as metaphorical and rich as the language and material used for poetry or painting. (Most of this layers are hidden, of course). The technology is not given, but shaped by Sukandar Kartadinata (the programmer) and me. It could have looked like a clay pot or a table with a pile of cables. I am interested in the meaning of technology, not in the function. In that sense, technology has no influence on the creative process, but in a more abstract way, it might contain creativity, and its meaning or its expression (not the functionality) can be influencial. In fact I think that one of the big problems in the area of new technologies related media art that is the fact, that its a lot of time focussing on the technology or the invention aspect of the work, rather than on the expression or the intention.

Miriam Petruzzelli: Someone interpreted the g-Pod in a socio-political key. Do you find this extreme or do you recognize yourself in this view? Why?

Jens Brand: The player and the pod are presented and constructed in a way, that offers a multitude of meanings and interpretations, some of them self-contradicting. Of course it has a relevence or it is a social statement when I am using a lifestyle thing like the Ipod and turn it into a gpod. Using a fetish gadget might intensify the communication. Its humorous, but at the same time its abusive. Abusive in the same way the suggestive ipod generates, represents and exploids a culture of the ³i². I work with this ideas because one aspect of the projections of the contemporary is realted to fashion and representative developments of its own time, that i am part of as well.

Miriam Petruzzelli: As polyhedral artist, do you think you can find one or more elements in common with your artistic research?

Jens Brand: i think one of the driving forces for my work is my interest in communication. i learn as much from communication as i learn from more passiv activities such as reading, watching and listening. The most interesting part of communication, is that it creates passages. But once you know the path you always tend to always take it. As I am more interested in what i don¹t know and what i don¹t understand, I look new methods and approaches. Another more simple element is my basic interest in anybody and the fact that I want to know why things happen the way they don¹t happen. Its not my interest to change or create, but to describe and discuss perception. I really like to show things the way they are not, or at least share my experience, that is: The more carefully I study an object or subject, the more confusing and contrary the two of us become

Miriam Petruzzelli: Do you think art must propose new models of relation? And if yes, how?

Jens Brand: Generally i don¹t think that art has to do something or has to be good for anything. Just because I am interested in certain things, doesn¹t make me believe that this is true for the arts as such. Its just my way of doing things.  Every good work that is or can be called ³art² is an exeption. Thats the only rule I know.

Miriam Petruzzelli: Can you talk about your projects for the future?

Jens Brand: I am hoping to finish the gplayer project by developing a internet platform for it. It will be a simulacra of the itunes store, but of course with different intentions and totally useless.