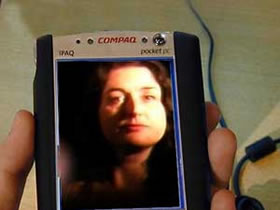 From installations exploiting mobile technology to works expressly conceived for iPod video is becoming more and more interactive. New possibilities of production and using have been opened and they encourage the artistic practices connected to “imagining in movement”. The evolution is more and more evident in single works of art, exhibitions, and festivals.

This evolution is evident in the British artist Martin Rieser ‘s installation Hosts, which has just animated the spaces of the Abbey of Bath with videos projected on 5 mega screens. The audience wore ultrasound plates and wireless handcuffs and they were free to move around. When a visitor stopped in front of a screen he “attracted” the projection of some characters addressing him some sentences and following him while he moved around the abbey.

A further development would have been the possibility to activate video appearances in different areas of the city through GPS and to give the possibility to the audience to create a 3D avatar by sending a pic from their mobile phone.

The works of art presented last December at the PodART exhibition at the Fine Art Space in New York are movable too: a series of artists from Marisa Olson to the MTAA duo realized some products thought to be visualized (and sell) on the last Apple mobile device only.

And projects like Odys for your iPod by Nathaniel Stern – far from the market logics and closer to the sharing spirit  are becoming symbols of a sort of interactive video-art and take-away at everyone’s disposal. Odys is a series of downloadable six video-poems where the main character  Odys  try to reconstruct his past in a fragmentary way: a past the spectator must help to reconstruct, by personally filling narrative voids up in a relationship that becomes almost intimate through the iPod fruition.

And there are also a lot of festivals dedicated to video: d/Art/2006 , Australian festival dedicated to video and digital arts from 15 April to 6 May are presenting a selection of works of art realized by means of mobile technologies. The American organization The Flux, which promotes young filmmakers, has presented the first iPod Film Festival . Users of its web site can vote online till 15 April.

So the possibility to long way interact make the space lived by the audience in installations huger and the technical reproducibility encourages the creation of a “personal gallery” that can be seen everywhere. There are a lot of users downloading videos and using instruments  that can be downloaded from the internet  to create other instruments to put at someone else’s disposal. This “virtuous” circle is very interesting.