Live: To Play And To Create Is Like Playing 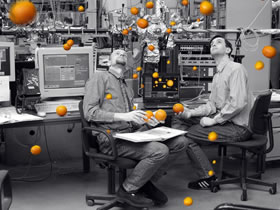 There is a musical software application which has been changing the modus operandi of electro music for some years. It is called Live. It is produced by the Berlin software house Ableton, founded in 1999 by the programmers/ sound engineers Robert Henke and Gerhard Behle, known as well as musicians under the name of Monokale .

The fans of the duo know that, since 1995, has been creating their own minimalist sound, rather distinguishable, made up of research of new possibilities of expression through electro music and keeping vintage instruments level with software and computer. Today Henke is going solo with Monolake, while Behle focuses on Ableton, even though his creative contribution is still fundamental for the development of new “features” of the revolutionary software, now at 5.03 version.

From 2001 to today, Live passed from its first rudimentary and quite limited incarnation, to the current futuristic version representing the state of the art in the field of tool for creation, production and execution of electro music ( and not only). A good part of the renowned electro music scene and Berlin house music revolves around the use of this sequencer, no doubt about it. Live is the creative turning point tool of electro music of 2006, exactly as MiniMoog was in the 70’s and 303, 808 and 909 and the samplers Akai were of the 80’s.

Let’s go with order. Live 1.0 was conceived simply as a software application allowing the handling of “live” loop audio and simple effects (delay, echoes and equalizers) able to integrate an electro musician in a band, getting rid of “sequences” imposed by study -conceived software such as Pro Tools, Cubase, Sonar and Logic. It is necessary to say that those eminent and powerful sequencers have always been planned with a linear approach nearer to the one a sound engineer can have for the mixing of the ended track rather then with a more chaotic and unstructured approach a musician can have during composition. The main difference between Live and other sequencers currently sold is exactly the different approach to composition, somehow linked to its origin as a tool conceived to make music rather than to plan it.

The possibility to cut, loop and recombine in real time (without pressing the stop button) gives the opportunity to the laptop- provided musician to make endless “jams” with complete bands. Exactly as the drummer, who can add groove to his part adding or cutting some “slaps”, the neo electro musician can do the same thing with his sounds.

From improvisation can grow new ideas exactly as when a band tries different tracks structure. Profiting from its typical uninterrupted flux of chances of (re)combinations Live becomes a flexible tool able to stimulate the creativity, even beyond musical or technical competences. It is not just a case that one of its creators, Henke, isn’t a musician in the classical meaning of the term; in fact he is not able to play manually any instrument.

Creativity with Live is always stimulated through an action-reaction process; it is a videogame with a high level of interactivity. We should never forget that playing an instrument is like playing a game, it is just not a case that in English “to play” means to play a game and to play an instrument (In Italian there are two different verbs). What Ableton understood and did, differently from other sequencers’ producers, is that the creativity phase should never be sacrificed and subordinated to the difficulty of use of the tool. A certain graphical minimalism of the interface, apparently just an aesthetic habit, is at the service of the immediacy of use: a cursor is little more then a line, a crossover is a horizontal line; a panpot is a circle and so on. The double graphical view with the window with vertical samples and the usual vision of the horizontal tracks ( with the controls to the right rather than to the left) are representative of a different style, of a more natural and less common way of thinking. In practice, it is a way of thinking made explicit in a software application of musical production.

With the 2.0 and 3.0 releases, Live started to transform itself in a perfect tool for creating music beyond playing it, but it was the 4.0 version that marked a true turning point for Ableton,. With live 4.0, they introduced the chance to handle external virtual tools and to edit and use midi with the same easiness the audio of the previous versions was handled. Live 4.0 has made explode the potential of Live, bringing it to become the pulsing heart of each new musician of laptop generation. The introduction of the mini sampler “simpler” and of the do-it-yourself drum machine “impulse” gave the possibility to the customers to create their own rhythmic and melodic lines and to integrate no matter which soft sinth in an extremely natural way.

The current version 5.0 is absolutely powerful, with all the features satisfying the contemporaneous electro musician. It has maybe started a new era of electro composition and it is not just a case if everybody, from Daft Punk to Nine Inch Nails, from Telefon Tel Aviv to Scanner, from Mogwai to Akufen, recognises the creative impact Live had on his approach to composition. The future is here, let’s get rid of the superfluous and free our creativity.