To Cure With Video Art 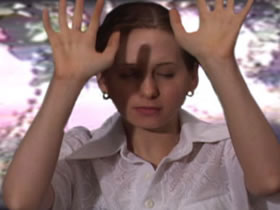 Aroma therapy, chromium therapy, music therapy, crystal therapy, art therapy. The varied world of the alternative medicine spreads more and more. Is it due to the mistrust of the traditional medicine and the stress of the nowadays life, or another new wage wave?

We do not know the reason of the success of these curative strategies, apart from fans and detractors (that admits anyway the existence of a placebo effect), but it is impossible deny that the stimulation of some dormant senses obtains some effects, most of all using lights and sounds. Even if it is not the results we were looking for, we always obtain something, most of all when we need to cure our mind and not our body.

A web project created by the Canadian Soil Digital Media Suite and signed by the composer and new media artist Michael Stecky is ironic about the problem. Perfectly Normal is created as an automatic dispenser of video and music, a “virtual therapy” on line 24/7, on demand, the audio-video cure that suite your disease the most.

Once specified your mood between a double definition, that you can compose choosing between tons of alternatives, the automatic machine of video therapy (14 in all) will give you images, sound tracks and instructions to take away the malaise and make you feel new.

For anyone who’d like to have the use of Perfectly Normal even far from the net, the wesite offers the opportunity to buy a complete edition on DVD. The therapists-video therapists ( Frances Limfat & Shelagh Albert, Miriam Ginestier, Mr. Jess Dixon, Nicole Shimonek, Anthony Johnson, Ross Bowden and Stecky himself ) have been inspired by real curative strategies from the present and the past, to structure their contribution. They used techniques such as hypnosis to controlled respiration, from psychic surgery to hands imposition.

Lots of sequences have been extractes by the material recorded for the video installation Pharmakon, realized in year 2003 by Stecky / Rodney LaTourelle and inspired by the theories of Rudolf Steiner and Wihlelm Reich to define the Vital Energy. Reich, as many before him and many others after him, supported the theory of the existence of an “energetic magma” in the entire universe. And he was convinced that we could individuate, understand and eventually change their sign.

The web project, under the mask of a parody site , bring up an entire net of reflections. Using the verbal and visual language of the traditional pharmaceutical industry, but also winking at miraculous pills, Perfectly Normal explains, even if in unconventional tones, the therapeutic power of the work of art, real food for our souls. Snack size!.